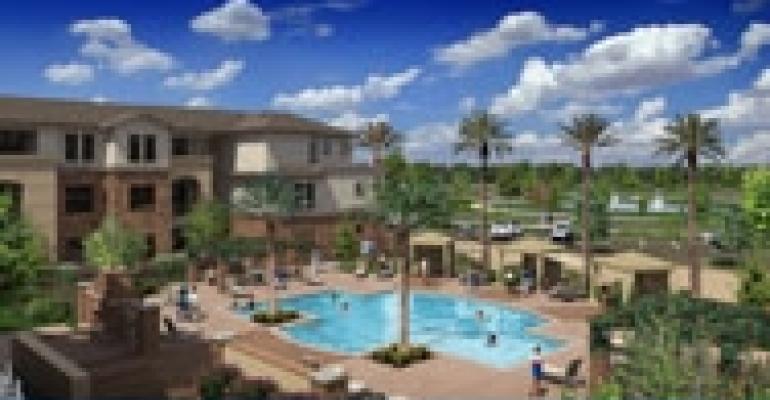 Capitalizing on the growth of an aging population in the Southwest while diversifying its multifamily portfolio, Opus West is making a major foray into the seniors housing market. The company is developing four new upscale rental properties valued at more than $125 million. Three of them are in Arizona, and the fourth is near Houston.

“We are building a highly amenitized upscale rental product,” says John Boyd, senior director of real estate development at Opus West in Phoenix. Monthly rents range from about $1,000 to more than $3,000, with a $2,500 move-in fee.

Opus West’s joint-venture partner is Red Group, a Scottsdale, Ariz.-based developer of multifamily and seniors communities. Leisure Care of Seattle, which operates seniors-only, resort-style buildings, is managing the new projects. Opus West and Red Group own the buildings. Opus West is a subsidiary of Opus Group, a development firm that posted revenues of $2.2 billion in 2007.

Opus West recently broke ground on Colonial Lakes Village, a mixed-use project in the Houston suburb of Missouri City. It features a 222-unit independent living seniors community, the Reserve at Colonial Lakes, which will include office condos and retail space.

Opus West has long been a player in the multifamily arena, but didn’t want to fly solo on its first venture into seniors housing, explains Boyd. “The learning curve with seniors housing is steep.”

Opus West plans to hold the buildings in its portfolio for five years, at which time the buildings should be fully leased and generating steady cash flows. “We want to have a 150 to 200 basis point difference between the development yield and the exit cap [rate], so we can get an appropriate return for the lease-up risk,” says Boyd.

The target development yield is 10%. Boyd expects lease-up to take 30 months. The depressed housing market has slowed lease-ups because residents usually sell their homes before they move.

About 70% of the Scottsdale building is leased. Seniors have become realistic about the value of their homes and are anxious to move, says Boyd. “We are past the uncertainty. I think we’ll be fine.”