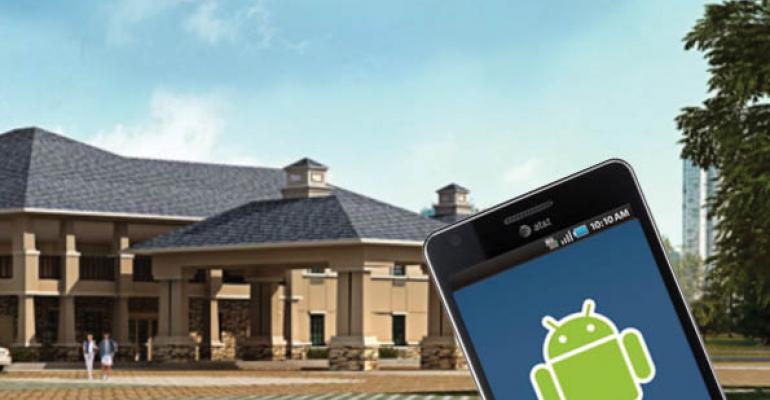 Large technology firms are dipping their toes into the seniors care market, launching pilot programs with select developers and care managers to increase the use of remote, non-intrusive health monitoring in both single-family homes and large facilities.

One such firm is Atlanta-based Thrive Senior Living, which has partnered with Seoul-based LG Corp. to develop a Smart Senior Living platform at its 15 properties throughout the South. The most recent Thrive property to open with this technology is The Legacy at Falcon Point in Katy, Texas, which was completed in September. The 164-bed assisted-living and memory-care community uses sensor and handheld technology devices for health records integration, communication, documentation, prescription filling, personal activity monitoring and even entertainment, including video calls with relatives. The technology is also being added into Thrive’s new 89-unit Village at Greer community in Greer, S.C.

Jeramy Ragsdale, Thrive’s founder and principal, says he was approached by LG in early 2013 to start a beta test of the technology. Since his company is only five years old, he says it hasn’t been difficult to implement the sensors and systems into his new properties. He says the LG partnership was a perfect match, as he wanted to invest in the most modern operating systems but didn’t want 20 or so different brands that wouldn’t interact together.

“I founded the company to capitalize on innovation as a whole, and it’s been surprising to me how relatively immature the industry has been toward improving health care with technology,” he says. “Most of the large firms are more focused on the housing elements. With these tech systems, we can allow more transparency and accountability to residents and families.”

The main piece of the Smart Senior Living system is a small Android-based tablet that staff members carry on their person. This device acts as a digital chart, allowing the caregiver to enter data while talking with the resident as well as gather and interpret data from the sensors in the senior’s room and input information on medication and doctor visits. The seniors themselves wear a Garmin Vivofit, which is also tied into the system and provides the caregiver with information about how much movement is happening—or not happening. A caregiver can go into a room and pull up-to-the-second information about the senior, such as a personalized service plan, special needs, requests from the family and even recent notes of what that resident needs at that particular time.

Ragsdale says there is somewhat of a learning curve for staff, but that constant use of the digital systems actually provides more time for the caregiver to spend one-on-one with the resident. “Instead of having to sit down each shift and write reports and consult charts, the data entry is done once and combined with the other data points, which results in much more tracking and information gathering even available before. It allows our caregivers to create a much deeper personal interaction with the resident,” he says.

The challenge for the industry, Ragsdale says, will be getting technology to work in the older properties. There’s just not enough new construction going on to meet the new demand for this type of service, he says. “My personal opinion is that this technology is going to have to expand beyond the housing industry, to even where it can deliver such care at a senior’s home,” Ragsdale says.

Tech giant IBM is doing just that, through its big data and analytics division. The Armonk, N.Y.-based firm recently announced a seniors housing technology partnership with the Sioux Falls, S.D.-based Evangelical Lutheran Good Samaritan Society. The nonprofit group serves 27,000 seniors in 24 states, both in their own homes or at various seniors properties, in 24 states.

The society has begun using IBM big data and analytics technology to enroll clients in a new [email protected] program. This system is mostly sensor-based, detecting such data points as sleep patterns and regular motion through living areas, to establish a baseline for detection when there is a problem. Daily medical information is also gathered digitally, including weight, blood pressure and glucose readings. The society’s staff members monitor the sensors and provide information to the local caregivers, whether that’s family members at the senior’s home or staff at an assisted-living or nursing facility.

Rustan Williams, vice president and chief information officer at the Lutheran Good Samaritan Society, says his firm has about 1,400 people signed up to use the system in 15 states. “By putting all this data together, it paints a portrait of someone’s health status,” he says. “Our workers monitor the baselines, and if they see a deviation, they work with that client or the physician to make sure there is early intervention, to intercept and treat that issue.”

He says by using the IBM system, the staff is able to go from caring for 100 clients to about 400 clients, and providing better care by specific monitoring. Reports gathered from the data can be provided to health professionals for better assessments. Adult children can also access the system to get a complete view of the kind of care given to their loved one.

“Our main goal is to help keep that person in place, whether they are at home or a facility,” Williams says. “Having to shift living is a difficult stress. This monitoring is good for the health care system, because if we can provide early detection or intervention, things can be caught before a condition gets worse. People are happier to stay in places they’re used to, it really helps their quality of life.”

He agrees with Ragsdale in that the enormous Baby Boom generation influx of seniors expected in the next 15 years will likely crush the current health care and seniors housing system, unless technology is used to temper an explosion of need. “I think you’re going to see the ‘medical home’ become more of a developed mainstay for seniors, where their issues are monitored by a central location, which will merge with their physician data, medication and hospital information. If we don’t accomplish this, we’re going to bankrupt the system,” Williams says.