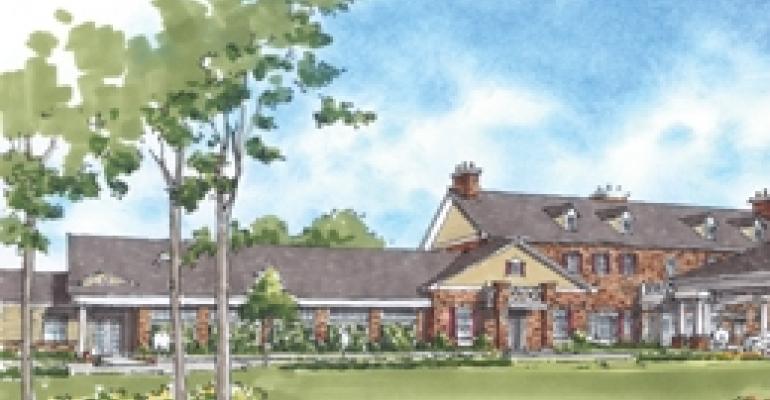 Golden Living, for example, has a new 72,000 sq. ft. nursing facility under way in Erie, Pa. that includes 115 beds. Most of the beds are available for short-term care residents — persons recovering from surgery or illness.

The rehab units are designed to appeal to younger consumers rather than long-term care nursing home residents who tend to be older and frailer. Most of the rehab suites are private and feature flat-screen televisions and wireless Internet connections. Golden Living’s building in Erie includes a new 4,000 sq. ft. rehab center equipped with the latest exercise equipment, and the facility is staffed with rehab specialists.

“There's really an evolution away from the traditional nursing home to one with more rehab services,” says Mark Besch, vice president of clinical services for Aegis Therapies, a division of Golden Living that provides therapy services. “There’s a real demand for these units.”

The push to add rehab units stems from increased demand. Each year in the U.S., there are more than 550,000 surgeries for joint replacements, primarily knee and hip replacements. After surgery and a short hospital stay, patients are typically released to a rehab unit to fully recover. Joint replacements are expected to increase dramatically in the coming years as more baby boomers demand the surgery.

Nursing homes are tapping into the growth of rehab services, which are reimbursed by Medicare or private insurance. According to MedPAC, the Medicare Payment Advisory Commission, Medicare spending on nursing home services totaled an estimated $22.8 billion in 2008, up from $22.1 billion in 2007, or about 3.1%.

Despite rising Medicare payments to nursing homes, owners and operators note that their rehab services cost less than hospital-based services. They see that cost savings as a powerful argument in favor of the current system as lawmakers consider health care reforms.

Nursing home operators foresee continued profits in rehab services. Medicare and private insurance pay higher rates than state Medicaid programs, which pay the bills for many long-term care residents. Though rates vary from state to state, nursing homes receive about $150 to $250 per day for a long-term care resident compared with $380 to $525 for a resident requiring a short-term stay, experts say.

Nursing homes need short-term residents in order to survive, says Mark Davis, president of Healthcare Transactions Group, a property acquisition advisor based in Baltimore. “A nursing home as a long-term care provider is unsustainable because the revenues are too low.”

Nursing home owner and operator Genesis HealthCare Corp. has added more than 80 rehab units at its properties over the last several years. Renovations cost about $20,000 per bed. The long-term care sections of the building are usually upgraded, too.

“The rehab units typically fill quickly,” says George Hager, CEO of Genesis HealthCare, based in Kennett Square, Pa. “We break even in about six months on a new unit.” The company's goal is to generate a 20% return on total invested capital. About 35% of a facility's population can be categorized as short-term care residents, Hager adds.

Long-term care residents stay on average about a year. Short-term residents stay about 25 days, creating a lot of turnover and the need for an aggressive marketing program.

Some 35 operators of buildings owned by Health Care REIT have added rehab units over the last several years. The Toledo-based company is currently financing rehab additions at two of its buildings.

“Reconfiguring the building is a good use of space,” says Chuck Herman, chief investment officer at Health Care REIT. A typical nursing home with 10% to 15% of vacant space can be reconfigured to accommodate the rehab space and boost the overall building occupancy. Revenues from new rehab units typically don't flow to the building owner, but property values usually increase because the facility has been upgraded and generates higher cash flow, Herman says.

For now, expect to see more nursing home renovations and more new rehab units. But owners and operators are carefully watching the health care debate. A change in the reimbursement system, especially with Medicare, could greatly affect the ability of nursing homes to make money in the rehab business. “When you live in this world, there’s always a concern about the reimbursements,” says Hager of Genesis HealthCare. “We always manage around it.”