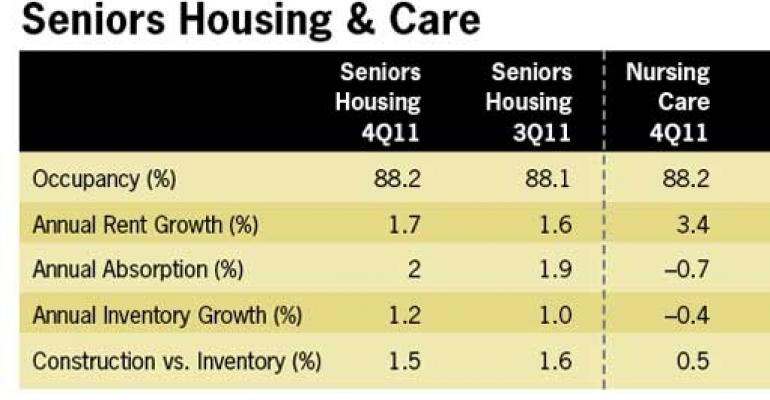 The seniors housing occupancy rate continued its slow recovery in the fourth quarter of 2011, although construction activity continued to decline, according to recent data released by the National Investment Center for the Seniors Housing & Care Industry (NIC).

The NIC forecasts continuation of recovery, says Charles N. Harry, Jr., NIC’s director of research and analysis. “Whereas occupancy is just north of 88 percent, we expect the occupancy rate to grow 1 percentage point or 100 basis points by the fourth quarter of 2012 to just north of 89 percent for seniors housing overall,” he says.

“That’s a continuation of the trends that we’ve seen recently,” says Harry. “In terms of new inventory growth, it remains constrained of late. That had much lower levels from the peak of a few years ago.”

“We continue to see strong absorption for both independent living and assisted living, exceeding the rate of new supply coming on line,” says Harry. “For senior housing as a whole, the increase in the occupancy rate is being led by independent living.”

“In terms of rent growth it never went negative like we saw in some of the other commercial real estate property types,” Harry notes. “But we are seemingly past the bottom in terms of the rate of rent growth and it continues to grow, although below the rate of inflation, as recovery in the market has been relatively slow and, with that, some individual markets are softer than others.”

For seniors housing properties, annual absorption was 2.0 percent in the fourth quarter of 2011, compared to 1.9 percent in the previous quarter and 1.7 percent a year ago.

This is the fifth consecutive quarter in which the pace of annual absorption is above that of annual inventory growth, resulting in rising occupancy, Harry points out.

In the nursing care sector, the number of beds has been decreasing, Harry explains. “Although inventory is decreasing similarly, absorption or demand of those beds is also decreasing, but at a slightly higher rate than the supply trends,” he says.