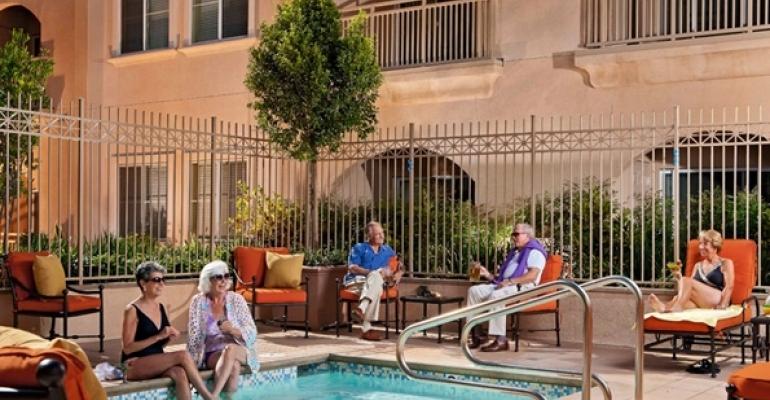 While no one expected the seniors housing industry to be delivering the Jetsons lifestyle yet, the industry has been slow to adopt new technologies to assist with home care and health care for its residents.

Two years ago, start-up firms were excitedly discussing pilot projects to add technology to assisted living, nursing and memory care facilities. Ideas included installing sensors in bathrooms and beds to help monitor medical issues, tablet-based medicine tracking systems to reduce mistakes and even the widespread use of Fitbits and other wearables for overall health encouragement.

However, the seniors housing community has still not moved much toward adopting these new high-tech services. Experts in seniors tech say it’s a tough sell to both the aged consumer, who was never part of the new computer age, and to industry executives who don’t yet see a benefit compared to the expected cost outlay.

The breakthrough in adoption of new technology features is still in the future, according to Ryan Frederick, founder and CEO of Smart Living 360, a developer of multigenerational communities.

“We’re still in the ‘more hype than reality’ stage,” he says. “From a business model perspective, you have to look at how to pay for adding all this technology, how to train the caregivers how to use it, and there’s just no proven model of success yet. It’s going to require a different sort of CEO and executive team—if you try to pitch this to the traditional operator who’s already quite successful in what they’ve been doing, you’re pretty much pushing uphill.”

Even the in-home seniors care industry is having trouble adopting new technologies. According to survey results released by Caring.com in November, only 14 percent of seniors have adopted some sort of technology system to assist with their care. The most used is the old standard, the personal emergency response system, similar to the “I’ve fallen and I can’t get up” advertisements of 30 years ago. Only 9 percent of the families surveyed had their elderly relative using medication management technology, 4 percent used Internet-based care coordination and just 1 percent used tele-health remote monitoring.

Personal care was high on seniors’ wish lists—with no one asking for more technology, said Andy Cohen, CEO of the website, in a statement.

Seniors housing providers and even doctors have watched some pilot programs crash, including last year’s failure of Silicon-funded medical alert sensor firm Lively, says Chris Edell, CEO of digital innovation firm Elevar. As a result, they are content to sit in the stands and wait for proven technology to emerge. The new direction, Edell says, may be toward a new concept dubbed “uberization,”: creating digital app systems that bring care from the outside world to seniors at the push of a button, instead of trying to install everything at the facility.

“We’re seeing companies that are leveraging this model, using tech to get services, such as creating an app to contact a store to bring over groceries, or to call for transportation,” Edell says. “We may not be seeing adoption yet, but we should in the next five to 10 years, as the boomers, who have adopted new technology, hit retirement age and beyond.”

One of these companies is HomeHero, which matches caregivers and services such as shopping, meal preparation, exercise, light housekeeping, companionship and personal care to seniors living at home and at specialized facilities. The company raised $23 million in venture capital funding last year (so had Lively).

CEO Mike Townsend says he has seen technology aimed at seniors both stall and succeed, with the successes mostly in already widespread tech uses such as payroll and hospital services. However, he compares the seniors housing industry adoption of technology to the driverless-car technology—it will likely happen gradually rather than all at once. Even with gradual acceptance by the seniors themselves, widespread adoption of high tech gadgets won’t take off until the health insurance companies are fully involved, Townsend notes.

“With the Affordable Care Act, you’re seeing more of a focus on wellness and value than on quantity of service,” he says. “But for technology, people tend to overestimate the progress you can make in one year, and underestimate the progress we’ll see in 10 years. What it really comes down to is the Medicare Current Procedural Terminology (CPT) codes. Once Medicare starts allowing the prescription of high-tech devices for care, once you have proof through actuarial studies that these devices save or prolong life, that’s when you’ll see more doctors prescribing them and insurance covering them. That’s when you’ll see the sprint to technology adoption.”