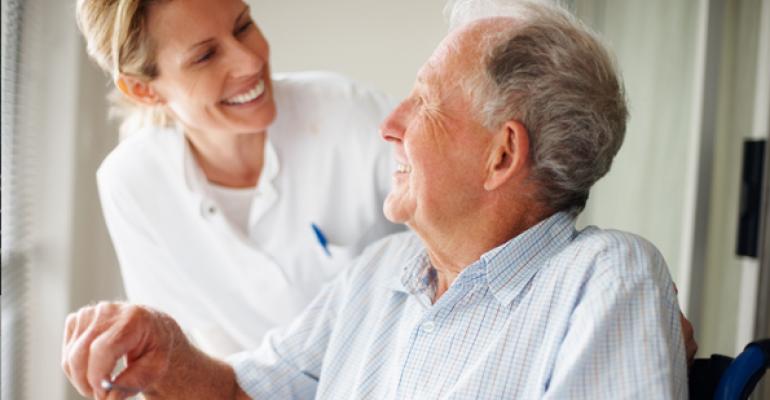 Deal volume in the seniors housing sector is down year-over-year, and with a new year (and a new administration) fast approaching, seniors housing investors are fine-tuning their strategies. Some are concentrating on acquiring properties run by solid operators and others are looking for value-add development opportunities.

“Transaction volume has slowed quite a bit. One reason for this is new supply is ramping up, which could be on the minds of investors,” says Michael Knott, director of U.S. REIT research at Newport Beach, Calif.-based research company Green Street Advisors.

The pricing in the market has led Seniors Housing Properties Trust, a Newton, Mass.-based REIT that invests in seniors housing properties and medical office buildings among other assets, to pull back from investing in the sector this year, says David Hegarty, the REIT’s president and CEO. He notes the two deals the company completed this year comprised an expansion of an assisted living property to accommodate a memory care component and a sale-leaseback of an assisted living portfolio.

“If I were making a new investment today, the most attractive is independent living, but a tremendous amount of capital is chasing that investment product right now,” Hegarty says. “So it could become more difficult to get an acceptable return in the short to medium term.”

According to Real Capital Analytics (RCA), a New York City-based research firm, in the first two quarters of the year seniors housing sales totaled $3.29 billion and nursing care facilities sales totaled $3.3 billion. This is down from the first two quarters of 2015, which saw $8.3 billion in seniors housing sales and $4.9 billion in nursing care facilities sales. Second quarter cap rates in the nursing care sector stood at 9.8 percent, up from 9.3 percent in the first quarter, according to RCA, but down 50 basis points year-over-year . Meanwhile, cap rates on sales of seniors housing assets stood at 7.6 percent in the second quarter, up from 7.0 percent during the same quarter a year ago.

“Investors still like the fact that there are yields in the sector, but it's getting harder to find deals and redeploy capital. Investors are thinking, ‘What do you buy if you've just sold a seniors housing property purchased a few years ago?’” says Jim Costello, senior vice president at RCA.

During the four-quarter period ending with the third quarter of 2016, there were $13.8 billion in seniors housing transactions, according to Beth Burnham Mace, an economist with the National Investment Center for Seniors Housing and Care (NIC). During the same period in 2015, there were $21.3 billion in transactions. The number of deals has also gone down. During the 12 months ending in June 2016, there were 488 deals closed, compared to 573 deals during the same period in 2015.

The drop in deal volume is expected to reverse in 2017, as more opportunities come to the fore. Some of these opportunities will come from changes to healthcare law, the continuing consolidation in the seniors housing industry and obsolescence of older facilities (some built as far back as two decades ago), notes Burnham Mace. These older facilities are primed for acquisition by larger operators, according to Mel Gamzon, principal at Miami-based Senior Housing Global Advisors, a national real estate advisory and brokerage firm specializing in the sector.

“Our firm anticipates an acceleration of transaction volume in 2017, likely increasing by at least 20-35 percent,” Gamzon says. “As long as cost and availability of capital remains consistent, values will remain strong. There are multiple investment opportunities in the seniors housing sector going into 2017.”

Both institutional and private equity investors seem to feel that opportunities abound, but are going about chasing them in different ways.

“As much as 80 percent of all current inventory is showing obsolescence. Not a lot of new capital investment [is going] into redoing these properties. But they are in good markets, and with some heavy lifting they deliver good commensurate returns. Typically, capital is looking for more stabilized assets that don't need repositioning,” Chapin says.

Privately-held real estate investment firm Harrison Street Real Estate Capital manages approximately $10.9 billion in assets including seniors housing, student housing and self-storage. Managing Director Michael Gordon says his company’s seniors housing strategy revolves around needs-based senior communities, with an emphasis on healthcare, supervision and programming and targeting underserved micro markets within the top 50 metros. “We have roughly 15 operating partners providing us with nationwide exposure, and our strategy with each individual partner is very unique. That is because this is a very local business, and the nuances of each sub-market require a targeted approach,” he says.

One common theme threading together the investment strategies of various firms is the emphasis on continuum of care. From an investment perspective, continuing care retirement communities (CCRCs) that offer care from independent living to assisted living to acute care are more stable assets, sources say.

This continuum of care is “an essential foundation of the industry,” according to Gamzon, valuable to consumers who don’t have to move as they age and valuable to owners/investors via reduced turnover rates.

ROC, for instance, prefers to invest in CCRCs offering two of the three major care services, such as independent living/assisted living or assisted living/memory care, says Chapin. “We want residents to be sticky to the property, catch them in the early stage of independence and care for them through their life,” he notes.

Gordon, meanwhile, stresses the importance of finding solid operators made strong by a quality staff that can build relationships between residents and the surrounding community. “By aligning with operators that understand that it is absolutely mission-critical to focus on the right staffing, whether it be nursing, activities, janitorial or culinary, we have been the beneficiaries of buying and building strong performing communities,” he says.

On the other hand, many investors are currently avoiding memory care facilities. Some say the investment is simply too narrowly focused to deliver satisfying returns, while others cite overbuilding in the sub-sector.

“It really comes down to an understanding of the specific micro-market, and specifically, existing supply, and more importantly, barriers to entry for new entrants,” adds Gordon “These communities are very volatile from an operational standpoint, due to their size and average length of stay, and when you layer [in] new competition, occupancy, rates and expenses can take wild swings.”

Harrison Street does invest in memory care facilities, but it concentrates on markets with very high barriers to entry and situations where these facilities operate in tandem with existing continuum of care assets in the same sub-markets, Gordon notes.

The trend of consolidations and mergers/acquisitions in the seniors housing industry is expected to continue in the long term.

“The seniors housing industry is fairly fragmented with lots of mom and pop operators,” Chapin says. “As much as 75 percent of properties nationally are owned by mom and pop type entities. [In the] next 10-15 years we will see institutionalization reach fruition. The industry now is made up of thousands of highly localized micro-markets.”

Smaller operators with a strong track record are the candidates institutional investors are targeting, according to Burnham Mace. These operators often run three to 10 properties. They can benefit from the economies of scale and best practices that merging with larger investors can offer. “We will continue to see consolidation in this sector,” she says.

The bottom line is that investment in seniors housing properties is not driven by yields alone, according to Costello—as evidenced by the high volume of new development in the sector.

The consolidation trend shows “long-term economic justification for interest in these properties,” Costello notes. “If this asset type was just about investors chasing yield, we wouldn't have developers looking as closely at the property type as they have the past few years.”