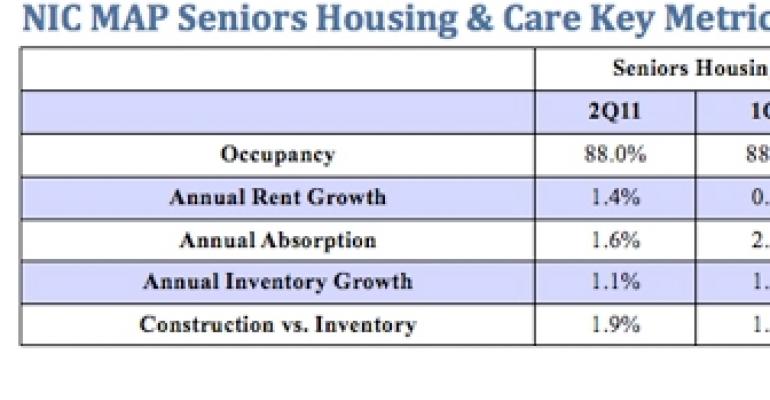 The seniors housing market turned in a mixed performance in the second quarter as rents increased but occupancies remained flat, an indication that the sector could be poised for gains as general economic conditions improve.

The average occupancy rate in the second quarter was 88% and unchanged from the previous quarter, according to newly released data from the National Investment Center for the Seniors Housing & Care Industry (NIC).

Seniors housing properties include assisted and independent living buildings. The NIC report is based on information collected from the top 31 metro markets.

“Occupancies have been trending sideways for two years,” says Michael Hargrave, vice president at NIC based in Annapolis, Md. “Everyone is waiting for an upturn.”

Even so, rent growth in the quarter was positive, according to the NIC report. Year-over-year rent growth increased to 1.4% from 0.9% in the first quarter, and 1.2% in the second quarter of 2010. The annual pace of rent growth is the highest it’s been in the past five quarters, notes Hargrave. “Rents are beginning to rise again.”

The rate of rent growth mirrors the annualized core inflation rate, which in June was 1.6%, according to the U.S. Bureau of Labor Statistics. Building operators have at least been able to keep up with rising expenses, notes Hargrave.

Another plus for seniors housing is that the change in the number of occupied units, or absorption, is still positive. But the report shows the rate of absorption is declining, a reflection of softness in the broader economy. Only 759 units were absorbed in the second quarter, the lowest level since the second quarter of 2009 in the midst of the recession.

The annual absorption rate in the second quarter was 1.6%, the lowest rate since the first quarter of 2010 when it was 1.5%. “That’s when occupancy hit bottom,” says Hargrave. Demand started to pick up after that, he notes, but has slowed again lately. “We would expect absorption levels to be a bit higher at this point,” says Hargrave.

The elderly often sell their homes before they move to a seniors building, and the weak residential housing market has kept many seniors at home. Also, some seniors depend on their adult children for financial assistance, and a job loss can curtail moving plans. “We need to see these economic challenges start to wane,” says Hargrave.

Occupancies may get a boost from the low level of new construction. Annual inventory growth was just 1.1% in the second quarter, down from 1.3% in the first quarter.

Looking at new construction in the Mountain states, the seniors housing inventory has increased in that region quickly. In the first quarter of 2009, the inventory grew at an annual rate of 6.8%. Building has slowed since then.

The growth rate in the second quarter of 2011 was 1.5 % in the Mountain region, closer to the national average of 1.1%. “A lot of inventory has hit the market in Denver and Phoenix,” says Hargrave.

Luckily, the Mountain region has a lot of demand for units. The annual absorption rate in the second quarter was 4.2%, more than double the national rate. “Operators are doing a good job of marketing,” says Hargrave. “The region is poised for higher occupancies in the next few quarters.”