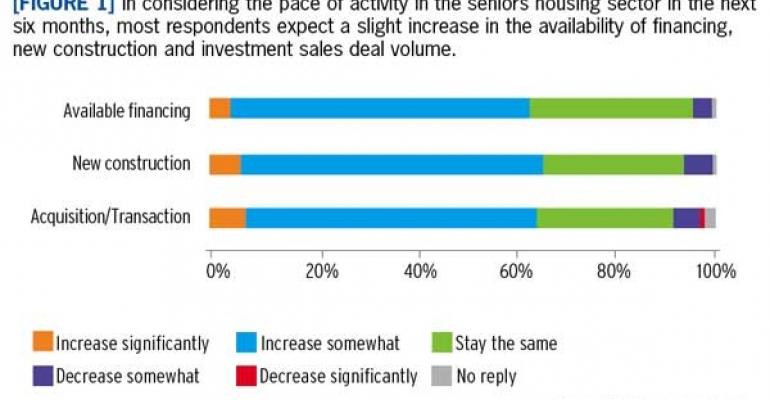 While the bulk of the real estate industry spent much of 2011 focused on shoring up weak fundamentals, the seniors housing sector quietly posted near record sales numbers, according to a research study conducted by NREI and Seniors Housing Investment Advisors.

The majority of respondents have a positive outlook for the sector in the coming year with more than half of all respondents, 64 percent, expecting an increase in acquisition/transaction activity and 63 percent anticipating an increase in the availability of financing in the coming six months [Figure 1]. (To view the survey in its entirety, go here.)

Investment transactions among seniors housing properties rose 340 percent in 2011 to a total of $27.8 billion across both seniors housing and nursing care properties, according to data from New York-based Real Capital Analytics.

“Our mergers and acquisitions activity in 2011 almost approached the boom years of 2006 and 2007, in large part because of the voracious appetite of the REITs for large portfolios,” says Mel Gamzon, president of Fort Lauderdale-based Seniors Housing Investment Advisors. That strong investment sales activity points to growing confidence in the improving fundamentals throughout the sector, as well as greater access to capital, adds Gamzon.

Seniors housing performed well relative to other real estate sectors. Respondents reported that the average occupancy rate within their portfolios is at 89 percent. Those results mirror industry data. The seniors housing occupancy rate continued its slow recovery, rising 70 basis points to reach 88.2 percent in fourth quarter, according to data from the National Investment Center for the Seniors Housing & Care Industry (NIC). Occupancy rates are now 110 basis points above the cyclical low point of 87.1 percent that occurred in first quarter 2010.

Improving property fundamentals along with strong demographics are fueling investor demand for properties. REITs in particular have exhibited a voracious appetite for seniors housing properties. REITs alone completed more than $20 billion in acquisitions in 2011. In fact, current market conditions and attractive buying opportunities have prompted REITs such as Orlando-based CNL Financial Group to re-enter the seniors market after having stepped away during the industry’s dip.

After liquidating its $5.5 billion portfolio of real estate properties in 2006 and 2007, CNL returned to the seniors housing market in 2011 with $750 million in new investments. The company, which is acquiring new properties mainly through its CNL Healthcare Trust REIT, expects to place a similar amount of capital in 2012.

“If you look at the number of people who are turning 65 and older, that supports a lot of growth in senior housing for many years out,” says Sharon Yester, head of asset management for CNL Financial Group. “I think what we have is a wide open field for the types of assets that we like.”

It has not been smooth sailing for the entire seniors housing sector, however. The slumping U.S. economy and housing market have taken a toll on key fundamentals. Nearly four-fifths of respondents, 79 percent, said that the state of the U.S. economy has had a negative impact on occupancy rates at seniors housing facilities in the past year. The state of the U.S. housing market drew a similar response of 78 percent [Figure 2].

Respondents are split on whether occupancies will rise in the coming months. Nearly half (48 percent) expect occupancies to remain the same over the next six months. The 43 percent who believe occupancies are set to rise represent a noticeable decline compared to 2011 survey results when 63 percent of respondents were forecasting an increase. That shift in positive sentiment may stem from occupancy levels improving throughout 2011.

Up until 2008, the overall industry occupancy rate for purpose-built senior housing was hovering between 90 percent and 91 percent. Those who do expect a further increase in the coming six months foresee occupancies to rise by an average of 69 basis points.

Respondents also are split on their views on whether rental discounts and incentives have been a help or hindrance to occupancies. Roughly one in four respondents (23 percent) believe rental discounts/incentives have positively affected occupancy levels over the past year, while 37 percent indicate they have had a negative effect, and another 40 percent believe that incentives had no effect or had no opinion.

Healthcare reform is expected to impact the seniors housing industry by increasing pressures on customer affordability. More than half of respondents (57 percent) indicate that healthcare reform will put greater pressures on consumer affordability, while 46 percent expect reform to cause higher acuity levels in independent living/assisted living facilities. About one in four respondents (27 percent) believes that reform will result in modified operating programs to enhance length of stay.

Another sign that seniors housing is on solid footing is that respondents are more bullish on new construction. Construction declined during the downturn. The annual rate of absorption for seniors housing properties, not including nursing care, has been growing at 2 percent, which is outpacing the annual growth rate of new inventory at 1.2 percent, according to NIC.

However, two-thirds of respondents expect new construction to increase in the next six months. In addition, 51 percent of respondents said they had new construction ventures planned in the next six months. The largest percentage has projects planned for independent/assisted living at 36 percent, followed by memory care at 24 percent and age-restricted communities at 8 percent.

Although REITs continue to be flush with capital, financing is a challenge for other investors. More than half of respondents (59 percent) are experiencing difficulties finding capital. Higher equity requirements are considered to be the biggest financing challenge for the industry at 41 percent [Figure 3].

The vast majority of acquisition and refinancing capital comes from Freddie Mac, Fannie Mae and HUD. “We now have a handful of life insurance companies, perhaps four or five, that will lend in the seniors housing space. But that is a very small number compared to the amount of life insurance companies that are active lenders for commercial real estate,” adds Mickelson.

Respondents believe that private investors will be the most readily available source of equity in the coming year. Four out of five respondents (82 percent) expect private investor equity to be available in the next 12 months followed by institutional money at 59 percent; REITs at 51 percent; pension funds at 32 percent and international investors at 26 percent.

Although respondents are more optimistic that construction activity will increase over the next six months, financing for those developments continues to be a barrier. Several factors are considered important when seeking construction financing. The most important factor viewed by respondents is having an experienced management team (84 percent), followed by an established track record as a developer (78 percent), higher equity contribution (68 percent), a comprehensive feasibility study (67 percent), and prior relationship with the lender (59 percent).

National banks are a consideration of one-third of respondents, while HUD is also being considered by 32 percent of respondents. Fannie/Freddie, which traditionally represents the majority source of financing for borrowers, represented just 26 percent. The important distinction there is that the question was worded to include both acquisition and construction financing. “What I like about those results is that it shows that people are looking at alternative sources of debt, and that is a very encouraging sign for this industry,” adds Gamzon.

REITs played a major role in acquisitions/transactions and merger & acquisition activity in the last year and their appetite for portfolios and even single properties remains strong. More than half of respondents (59 percent) expect REIT M&A activity to be moderately or very aggressive in the coming six months compared to the 29 percent who expect limited M&A activity. Another 11 percent expect REIT activity to be focused only on large transactions priced at $200 million or above.

“Right now, if you are not aggressive in acquiring portfolios, then somebody else will be,” says David Hegarty, president and COO of Senior Housing Properties Trust in Newton, Mass. The REIT closed on $668 million in senior housing properties and another $336 million in medical office properties in 2011. Essentially, that amounted to a 25 percent growth for the company—increasing the REIT’s $4 billion in assets to $5 billion in assets in just one year.

That said, Senior Housing Properties Trust expects to place much less capital in 2012. “I don’t think there are all that many more significant portfolios to be acquired,” says Hegarty. He expects that the REIT’s acquisition volume will be about one-third of the level it saw in 2011, roughly $300 million.

Respondents are slightly more optimistic that independent living/assisted living properties will experience the greatest growth in investor demand in the coming six months, leading all other property types. [Figure 4].

Buyer demand for premium properties is putting pressure on cap rates. One in three respondents expect cap rates to increase over the next six months, while 38 percent predict they will stay the same and 27 percent expect a decrease.

However, there continues to be a pricing gap based on quality and location of properties. The class-A portfolio transactions that have been competitively bid are generating some of the lowest cap rates between 6.75 percent and 7.25 percent. Everything else, such as individual properties in secondary markets, are generating cap rates about 100 basis points higher. “I don’t know how cap rates can compress much more, because the cost of capital is already so low right now that I can’t imagine it getting any lower,” says Hegarty.

In December, for example, Senior Housing Properties Trust closed on eight properties in a nine-property portfolio from Classic Residences by Vi, for $379 million. In that case, all of those properties were in first-class markets and the purchase featured a cap rate in the low 7s, notes Hegarty. The sale of the ninth property is still pending due to regulatory approvals.

As recent sales activity suggests, this is an excellent time for current owners to monetize assets as both debt and equity is readily available. “The industry fundamentals have proven to be solid during the economic downturn, and we can anticipate modest growth both in M&A activity and new construction in the year ahead,” Gamzon says.

The NREI survey, conducted between Feb. 14 and March 7, yielded 221 respondents, including 164 directly involved in seniors housing as brokers, developers, owners or operators.