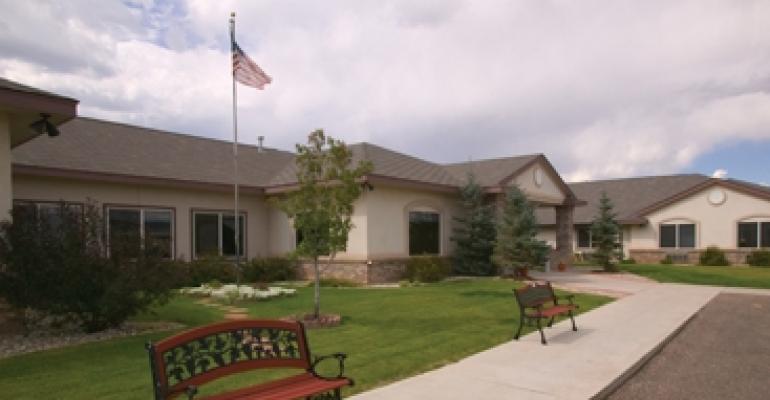 While some investors sit tight and wait for economic conditions to improve, one operator is growing its portfolio in small markets.

Edgewood Management Group recently picked up a contract to operate five assisted living buildings in the state of Wyoming, three of which are being expanded.

The buildings were recently purchased for $45 million by Investors Real Estate Trust (IRET) based in Minot, N.D.

Edgewood owns two of the properties and has master leases on 20 facilities. Edgewood manages the five communities in Wyoming owned by IRET.

For now, the company is focusing on assisted living. Edgewood and IRET plan to add more units to three of the recently purchased Wyoming buildings.

At Aspen Wind Assisted Living Center in Cheyenne, 15 apartments will be converted into memory care units this spring. The original building, with 77 units, was designed in pods, or sections.

“Remodeling works wonderfully because of the way the buildings were designed,” says Gisi. Another 34 assisted living units will be added to the community, bringing the total number of units up to 111.

Similar plans are under way at Spring Wind in Laramie and Meadow Wind in Casper.

Why not build new facilities? Small markets, such as those in Wyoming, don’t have enough demand to support new buildings.

An Edgewood feasibility study finds current demand for 20 to 25 new units in each local market. So adding on to an existing building makes the most sense.

About 15 years ago it was cost effective to put up small buildings with 32 units, Gisi says, but not anymore. The economies of scale gained with large facilities make small ones unattractive investments.

“A facility with 80 to 120 beds that includes some memory care is ideal for this part of the country,” explains Gisi.

Edgewood manages a total of approximately 1,900 units, 282 of which are independent living apartments. But about half of the residents in those units now receive assisted-living type services.

“We are converting independent living units to keep our (occupancies) census up,” says Gisi.

The economy has been holding up well in the states where Edgewood operates. The unemployment rate in North Dakota, for instance, is 4.2% compared with 9.7% nationwide.

The strength of the oil business in the western part of the state has helped to boost the economy.

Edgewood’s portfolio has an average occupancy rate of 92%. That includes a facility with 194 units that opened late last year in Bismarck.

But returns aren’t what they used to be for investors like Edgewood. Investment returns were as much as 30% in the late 1990s when assisted living buildings were a new type of product.

Lease-up took 12 months or less because of little competition and growing demand. Since then the investment climate has changed dramatically.

Edgewood plans to build new facilities this year, and is considering the construction of a $7.2 million project with 75 units.

The combined internal rate of return over five years, assuming a 9.5% cap rate at termination, yields about an 11.54% cash-on-cash return with an 18-month lease-up period.

“The key is the lease-up rate,” says Gisi. Expenses for marketing and new staff are high during the lease-up. On a $10 million facility, he figures he loses $1.5 million on operations in the first year.

“It’s a capital-intensive business,” emphasizes Gisi. Most buildings break even when occupancy hits 84%.

Edgewood hasn’t had trouble getting financing. The company borrows from regional banks and real estate investment trusts (REITs), though a 30% equity contribution is standard nowadays.

“We never had a lot of debt as a company,” says Gisi. “That was a good thing when times got tough.”

In the next few months, Gisi plans to form a REIT with some Edgewood properties. “We are looking for facilities to buy,” he adds.

The company eventually plans to expand into Idaho and Wisconsin. But for the time being, Edgewood is looking for properties in Montana and Nebraska.

Like many other investors, Gisi hopes to streamline operations by creating economies of scale. It’s not efficient to manage buildings spread out over many different states. “We are focused on locations near our other facilities.”