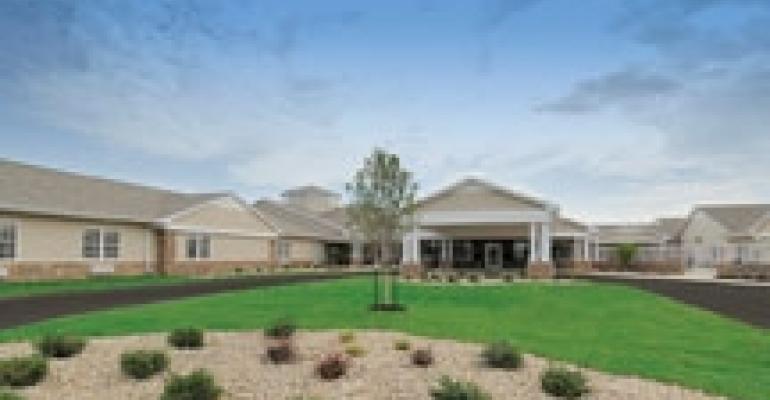 The struggling economy hasn't stopped expansion plans at Trilogy Health Services, which continues to beef up its portfolio of Midwest properties. The Louisville-based owner and operator of assisted and nursing care campuses recently purchased six projects for $34.5 million from the Franciscan Sisters of Chicago Service Corp. Trilogy also has new projects under way in Indiana, and Ohio.

"We had an outstanding first quarter," says Randy Bufford, president and CEO at privately owned Trilogy. Occupancies at Trilogy's projects are running just above 90%, he adds.

Trilogy operates 56 projects in Indiana, Ohio, Kentucky and Michigan. The company owns about 70% of the portfolio. The projects are health campuses that typically include skilled nursing, assisted living, dementia care, adult day care for seniors with memory problems who live in the wider community, and short-term rehabilitation for those recuperating from illnesses or surgery.

Trilogy was one of 14 bidders for the six Franciscan Sisters properties, and one of three bidders without a financing contingency, Bufford says. Trilogy's purchase was financed by the Chicago-based Private Bank.

A $5 million renovation of the properties is planned over the next 18 months. The Louisville project, for example, currently has 150 beds and only four private rooms. The facility will be converted into a 90-bed nursing care building with a number of private rooms. "We want to reposition the properties and make them more market competitive," says Bufford.

New Trilogy projects also are under way in Englewood, Ohio, near Dayton, and in Lafayette, Ind. The Englewood project is slated to open early next year. The Lafayette project opens later this year. A new project in Terre Haute, Ind., also opened last fall. Each project costs about $12 million to $14 million, according to Bufford.

The projects are built on a "town square" model created by Trilogy over the last 12 years. The design features mostly private rooms configured in neighborhoods. Neighborhoods are situated off a central area or town square. The old-fashioned-style square includes a restaurant, media section, beauty shop and seating areas.

Each neighborhood has a small one-person nursing station instead of a large central station. At Cobblestone Crossings, the Trilogy building that opened last fall in Terre Haute, caregivers are assigned to only six or seven residents in a neighborhood in order to provide consistent and personal care.

Trilogy buildings have a less "institutional feel" than older facilities, says Bufford. "The neighborhood concept lends itself to person-centered care."

A number of seniors housing providers have adopted the neighborhood model. Building policies also seek to make the facilities more resident friendly. At Trilogy, for example, the focus is not on the staff's schedule, but on what the residents want to do and when they want to do it.

Trilogy generates a 15% return on equity, Bufford says. He attributes the results to a high number of private pay residents, about 75% in long and short-term nursing care. Only about 26% of residents in long-term care are paid for by Medicaid. And all of the assisted living residents are private pay.

Bufford notes an attitude shift among lenders of late, which bodes well for seniors housing going forward. In contrast to the lull of the last six to eight months, Bufford says that bankers are picking the phone and returning calls again. “There's a glimmer (of hope) in the capital markets."