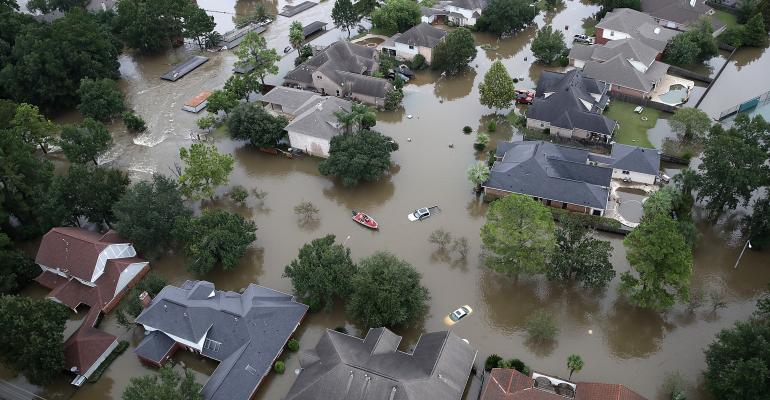 Will Damage from the Hurricane Season Become an Opportunity for SFR Investors?

Already, there has been talk of investors coming into the Houston region—whether from institutional or opportunity buyers—but little action, says Chris Clothier, a partner with Memphis Invest.

Hurricanes Harvey and Irma decimated scores of single-family homes, leaving devastating floodwaters and damage in their wakes. Some investors may already be preparing to pounce on opportunities to purchase and flip—or eventually rent out—storm-ravaged properties. However, it may take several months to see the extent of investors’ interest and where it might come from—if at all, according to some industry experts.

Already, there has been talk of investors coming into the Houston region—whether from institutional or opportunity buyers—but little action, says Chris Clothier, a partner with Memphis Invest, which buys, renovates, sells and manages properties in cities around the country, including Houston. The company manages around 170 properties located in the region affected by Harvey, with four homes suffering major issues and others minor ones.

Clothier says he has noticed an uptick in direct mail buyers, or investors saying they will buy properties for cash. However, investors may be more optimistic about their chances to snag deals than they should be, he notes. “I’m not seeing any indication yet that it’s going to be as big or as deep as what people were anticipating after the storm,” Clothier says.

The Houston region is still recovering from the storm, and some houses may turn into a complete loss and will become empty lots, Clothier says. Houston saw far more damage to its single-family stock than its commercial properties. In Florida, stricter building codes may have protected some of its commercial structures, though the Florida Office of Insurance Regulation reported 514,840 claims for residential property damage. There are roughly 5,000 securitized single-borrower, single-family rental properties valued at about $832.6 million in the region affected by Harvey, and the average vacancy rate was 9.3 percent—the highest among the top 20 metropolitan statistical areas--as of the end of August, according to research from Morningstar Credit Ratings. For the region impacted by Irma, there are more than 7,000 securitized single-borrower, single-family rental properties worth around $1.66 billion, though not all saw damage, according to the firm.

This makes what happened in the storm-ravaged region unlike what occurred after the financial crisis, when institutional buyers like Starwood Waypoint Homes and the Blackstone Group, which recently announced they are merging, snapped up scores of foreclosed homes to rent out at a profit. Many of the homes acquired during the crisis were in good shape—they fell into foreclosure because of economic circumstances, Clothier notes. “Here, you’ve got something that has been damaged,” Clothier says. “You’re not talking about the same kind of stock.”

David Jarvis, senior vice president of consulting at John Burns Real Estate Consulting, who is based in Houston, has noticed increased interest in distressed properties after the storm, and would not be surprised if large institutional buyers enter the market, as it has a large population, he notes. Houston is the fifth-largest metropolitan area in the country, according to a report from brokerage firm Marcus & Millichap.

However, investor risk lies in gauging what they might have to spend renovating the home, Jarvis says. He also expects labor rates and the cost of supplies like drywall and flooring to rise, given the increased demand for remodeling and rebuilding.

The extensive amount of necessary repairs may add up to be too much for investors, Clothier adds. For example, with mold remediation, it has to be complete and thorough. Rusted out AC units and water heaters also would have to be replaced. “Sometimes a discounted price isn’t enough to make it worth investing in it,” Clothier says.

Steve Hovland, director of research for HomeUnion, which offers investment opportunities in single-family rental real estate, doubts that investors will acquire large portfolios of distressed homes after the storm. “This narrative has more tailwinds in the media than in practicality,” he wrote in an email. HomeUnion has approximately 500 single-family rental homes under management in the parts of Texas and Florida that were affected by the storms. Less than 1 percent of the homes in its Houston and Florida portfolios suffered sufficient damage to warrant insurance claims, he wrote.

Though tens of thousands of homes in Houston were flooded, there is no conduit for institutions to easily acquire these properties. “In order for banks to sell large blocks of homes, similar to what we saw during the housing crisis, foreclosures need to happen,” Hovland wrote.

This is unlikely to happen for several months, he added. Instead, transactions may happen on costly one-off bases. “By delaying a transition of ownership, mold and the elements will have time to exact a greater toll on properties requiring rehabilitation. At some point, it’s no longer financially feasible to purchase these damaged homes and convert them into rentals,” Hovland wrote.

Some Starwood Waypoint and Invitation Homes properties sustained damage from the storms. Invitation Homes said in a press release that about 30 percent of its 23,449 homes in Florida and Atlanta saw minor damage, and five homes sustained severe damage. The company, which does not have homes impacted by Harvey, estimated that Irma-related damages range from $14 to $17 million. Starwood Waypoint sustained about $10 million in repair costs for Irma-ruined homes, the company said in a press release. Around 25 percent of its properties saw significant damage and 4,400 properties—13 percent of the company’s portfolio—saw minor damage. The company owned 9,688 homes in Tampa, Miami and Orlando, Fla. as of June. In September, the company announced that 135 homes—about 0.4 percent of its portfolio as of June—sustained major flooding as a result of Harvey. About 625 properties had minor damage from the storm, and the estimated total cost of repair for Harvey-damaged homes was expected to be less than $10 million.

Investors—especially those looking to buy and flip a home—entering a market following a natural disaster would not be unprecedented, says Daren Blomquist, senior vice president at Attom Data. The company undertook a case study of Baton Rouge, La., which saw severe flooding in August 2016, and saw this scenario play out there. In the second quarter of this year, the share of flipped homes—those bought and sold within a year—in Baton Rouge jumped up 72 percent from last year, Blomquist notes. This followed a spike in foreclosures, which occurred several months after the flooding given a foreclosure moratorium that prohibited banks from foreclosing on properties for several months. Baton Rouge also saw an increase in cash sales—a sign of investor activity—soon after the floods, he says.

However, it is less clear how many of those homes were rented out, Blomquist says. Attom Data also did not observe an influx of institutional investors—or those who acquire 10 or more properties—in Baton Rouge following the floods. While there are still a lot of unknowns in regards to Houston’s recovery, he says institutional investors may be more active in Houston, as it is a more visible, top-tier market. “It’s kind of too early to tell on some of this investor activity,” Blomquist says.

Clothier says his company—Memphis Invest—may look into any investment opportunities in Houston that arise after the storm. However, a lot depends on where the damaged homes are, he notes. “We’re very particular [about] what we buy and where,” Clothier says. “We’re not going to change our business model.”