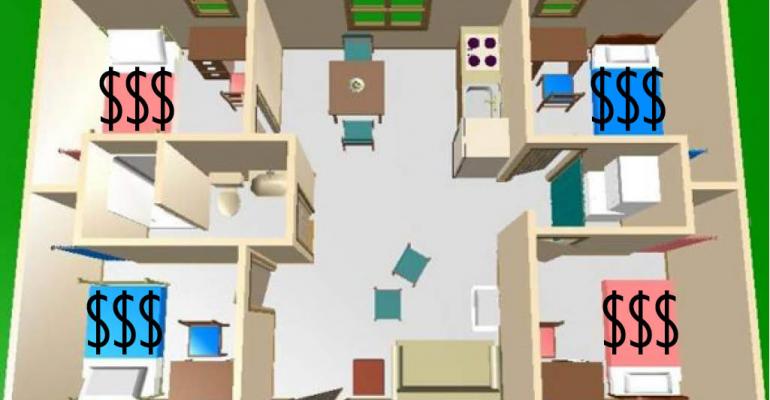 New student housing communities crammed with expensive amenities are opening around many of the country’s largest, tier-one universities. They compete with each other to attract the same small group of very wealthy students who can afford them.

“The majority of the newer properties are priced at the top of the market,” says Taylor Gunn, student housing analytics lead for research firm Axiometrics.

“Our rent growth is very strong—at the high end of what industry participants typically achieve,” says Avi Lewittes, chief investment officer for Scion, an owner and operator of student housing facilities. Scion’s properties include many mid-priced communities. “We are often able to offer student housing beds at the mid-$500 to $700-a-month price point,” says Lewittes. The percentage of occupied beds at Scion’s properties is nearly 100 percent, he notes—compared to the 95 percent average for student housing properties overall in 2015, according to date firm Axiometrics.

Scion has developed a core competency in repositioning older student housing properties that have strong locations near flagship universities. The company can improve these properties and raise the rental rates, but still offer rents that are much lower than what it costs to live in a brand new student housing community.

For example, Scion has bought 16 student housing properties so far from American Campus Communities (ACC), one of the largest student housing REITs in the country. “That’s more than they have sold to anyone else,” says Lewittes. The transactions included the purchase of seven communities totaling 5,096 beds from ACC in 2015 for $175 million, or roughly $34,000 per bed.

The rental rate of a student housing bed grew 2.2 percent on average in 2015, rising to $617 a month, according to Axiometrics. But rents grew more quickly for older properties, which typically set their rents below the average. For example, the rents at properties built in 1998 grew 4.3 percent to reach an average rent of $542 a month. The rents at properties built in 2002 also grew 4.3 percent, to $491 a month.

Meanwhile, the rents at newer student housing properties tended to grow more slowly in 2015—even though these properties often provide the most attractive accommodations. The rents at properties completed in 2010, 2011, 2014 and 2015 all grew less than the average amount last year.

That’s partly because these relatively new properties have to compete with brand new assets that are just now opening their doors—and nearly all of the new properties charge high rents and aim to appeal to the same set of students who can afford these high prices.

“When developers build new student housing, they are typically building for that high-income student whose parents are willing to pay,” says Brian Veith, of the National Multifamily Housing Council (NMHC). “That’s particularly true near campus.”

Developers are often forced to set the rents very high at new properties because of the economics of development. Students increasingly want to live within walking distance of their university, but development sites close to campus are often expensive and small. Developers have to build mid-rise or even high-rise buildings to squeeze a significant number of beds onto these small sites. The combination of expensive land and the high cost of high-rise construction works out to high rents.

The limited number of students who can afford to live in these expensive communities may be fickle, especially after a luxury community has been open for two or three years and other, newer community open nearby. “They may be looking for the newest, shiniest and best every year,” says Lewittes.