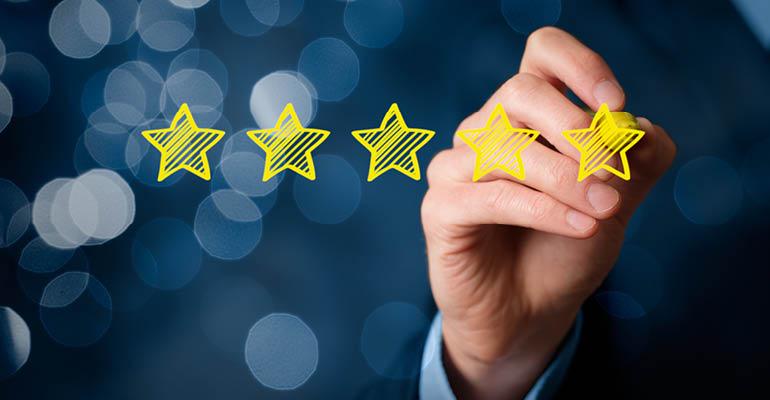 Ratings and reviews success in student housing hinges on an authentic, unwavering commitment to resident engagement. Having five out of five stars doesn’t hurt either.

Jeb Bush lived there. So did Dell Computer founder Michael Dell (in room 2714). Rushmore filmmaker Wes Anderson worked at the cinema on property. But even after a $4 million value-add renovation was completed in 2016, the 27-floor Dobie Twenty21 in Austin, Texas, struggled to fill up as newer student housing digs closer to The University of Texas siphoned off some of the co-ed resident occupancy.

Dobie Twenty21 has since stabilized, but getting the property’s real world results to resonate in the echo chamber of online ratings and reviews is still an ongoing challenge. Like many properties, especially those emerging from a major repositioning, average ratings for the property in Spring 2017 have been inconsistent, ranging, for example, from two stars on one review site to four and a half stars on another.

Getting more consistent and higher ratings results is a growing area of focus for many property management teams. As it turns out, a student’s decision to rent may very well be all in the stars.

That’s per The Internet Adventure: The Influence of Online Ratings on a Student Decision Making, a survey of 11,000 students conducted by Houston-based J Turner Research that pegs the ubiquitous star ranking as most influential when it comes to triggering a rent-or-don’t-rent decision from an online review. Given this critical role, student housing firms are both engaging more with ratings and mining the data for better operational and marketing insight.

According to the survey, 52 percent of students pointed to the star ranking as one of the top two most influential prompts that helped them evaluate review content, as compared to things like the overall number of reviews (36 percent), the sentiment of reviews (29 percent) and or the frequency of review postings (10 percent), among other factors.

“As we dive deeper into the research behind that 52 percent, it’s clear prospects are using the star rankings as a qualifier,” says J Turner President Joseph Batdorf. “Star rankings are critically important from the outset as a ‘will they visit’ perspective, and there are a lot of properties that prospects aren’t visiting at all based solely on poor or lackluster star rankings.”

It’s not just students and their parents taking note of property ratings and reviews either. Investors are also tuning into review content as a source of competitive business intelligence, particularly when it comes to measuring the forward growth potential of an asset.
“We incorporate reviews into pretty much every study we are doing,” says Scott Duckett, chief operating officer for Austin, Texas-based Campus Advantage. “The data provides a sense of how our competition is viewed by the student. We do it more so on acquisitions than new development, but it’s one of the first steps in a desk review to look at competitive patterns.”

To that end, J Turner Research is at work developing a master ranking of the rankings for the student housing set. Similar to the company’s online reputation assessment (ORA) score in multifamily, a student housing metric is likely forthcoming as the firm finalizes its analytics.

“We do know by looking at our numbers which student companies are coming out on top in terms of online reputation,” Batdorf says. “The analysis will likely include an ongoing list of the top one percent of performers in the country across the board and the top 10 performers amongst the 50 largest student housing companies.”

With so much on the line, owners and managers are struggling to right-size negative review content and push properties upward in the rankings. Thwarting their progress is an explosion in the sheer number of sites offering ratings—and a little comp mischief, too.
“It’s very hard to get good reviews and very easy to get bad reviews,” says Duckett, who adds that a Campus Advantage reputation management team looks for recurring themes that point to real issues warranting corrective action. “If three or four reviews are talking about poor maintenance, you probably have a valid issue with your team onsite, but one-star ratings with no comments? That could be anybody or anything, including a competitor trying to drive you down in the rankings.”

Just keeping pace with the surging ranks of online reviews arenas can be tough. In addition to national platforms on Facebook, Google and Yelp, asset owners, investors and managers have to answer to ratings on ILSes like Apartments.com and ForRent.com, and increasingly must also contend with online property reputation during acquisition and disposition. “You can’t ignore an acquired property that needs a reset from a reputation management and PR standpoint,” says Jamie Matusek, president of marketing firm Catalyst, an affiliate of Campus Advantage. “You can’t be silent. You can no longer think it will simply go away.”

Whether your property rep is earned or inherited, Matusek advises unilateral engagement with reviewers. The key to advancing upward in the ratings is to embrace authenticity while resisting negativity.

“One of the key commonalties between Gen X, Millennials and Gen Z is that they want authenticity from the brands they buy from,” Matusek says. “Our advice is to respond as quickly as possible, and respond to every review. It shows you are paying attention. It shows that you care and are authentically engaged in the customer experience.”

Tracking down where ratings and reviews evolves next as a critical informant to that customer experience is still a nascent science. Per J Turner Research’s Internet Adventure survey, 48 percent of students cite online search as their primary source of information when looking for housing, compared to only 28 percent who were more inclined to take a referral from a friend. Regardless, 81 percent of students say they rely on ratings and reviews at some point in the housing decision process.

Campus Advantage, for one, isn’t content with merely going after ratings platforms per se. The company wants to leverage Snapchat for first-person video reviews and is piloting programs to give prospects Snapchat Spectacles for recording video impressions during tours. “Email has already become an arcane thing to the next generation and to stay on top we’re actively examining how to put a Snapchat platform in place,” says Duckett.

When it comes to online reputation and the ratings renaissance at Dobie Twenty21, at least one notable prospect has taken note. In December 2016, Target announced it would become a tenant in the adjacent retail space and open its first student-housing concept store on the property. Somewhere, somehow, you figure that will make it to Snapchat as well. Although likely it won’t be posted by Jeb Bush.