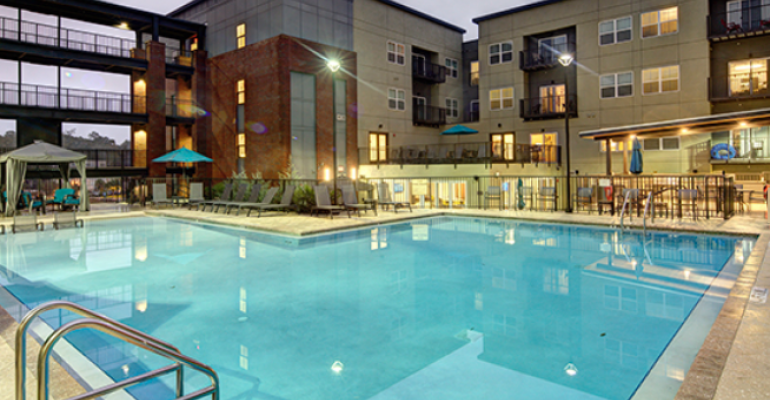 Picking out amenities was a much easier job just a few years ago when many student housing properties were built a mile or more away from campus, where a development could sprawl over 20 or 30 acres.

Student housing communities are competing to provide the flashiest amenities to attract residents even though they are now being built on tiny urban sites where space is at a premium.

To win that war, developers need to pick the amenities that they provide very carefully. There is no square footage to spare on things like tanning beds or movies rooms that students don’t use.

“You only get to build the amenities one time,” says Faulkner.

Picking out amenities was a much easier job just a few years ago. Back then, many student housing properties were built a mile or more away from campus, where a development could sprawl over 20 or 30 acres, with lots of room for features like basketball and volleyball courts. “From large pools, lazy rivers, theaters and tanning beds, these types of amenities were a necessity to attract students to the remote properties,” says Jake Newman, senior vice president of development at American Campus Communities, a student housing developer, owner and manager.

Now developers struggle to stack hundreds of student housing beds onto much smaller sites close to campus. “The most important amenity is definitely location,” says Taylor Gunn, student housing analytics lead for data firm Axiometrics. “Being in close proximity to the university is what we’ve seen drive strong performance.”

To squeeze onto these small sites, developers are creating mid-rise and high-rise buildings that are more expensive to build on a per square foot basis. But to succeed, student housing projects still need much more amenity space than a conventional apartment community, even if developers no longer have room for a volleyball court or a lazy river.

That’s partly because student housing typically fits an average of three student housing beds into each apartment. That’s twice as many people per unit as a conventional apartment community, according to Faulkner. Also, students are much more likely to want to gather in community amenity spaces. “Student don’t stay in their rooms,” Faulkner notes.

Developers have to pick the right amenities for their projects because space is at a premium.

Developers should think twice before they spend valuable space on amenity spaces designed for more solitary use. For example, fewer developers are building movie theatres. Instead they are investing in spaces that look more like sports bars with large screen video monitors, where students can both watch movies and socialize.

The best amenity spaces can be the setting for both studying and many kinds of social activities. Swimming pools might be set on a rooftop to provide outdoor space, including outdoor kitchens, plus places to lounge by the pool and read.