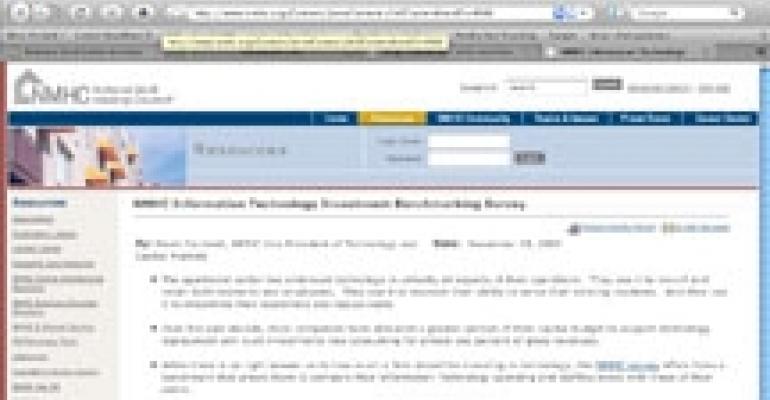 Smaller apartment companies spend a far greater percentage of their information technology (IT) budgets on outsourcing and consultants than large firms, according to a new survey by the National Multi Housing Council (NMHC).

When analyzed on a spending-per-unit basis, medium-sized firms (15,000 to 29,999 units) have the largest IT expenditures, $243 per unit. The largest firms (70,000 units or more) spend just $75 per unit on IT-related expenses, and smaller firms (9,000 to 14,999 units) spend $71 per unit. This wide variance may occur because larger firms tend to be early adopters of new technologies, says David Cardwell, NMHC's Vice President of Technology and Capital Markets.

As a result, Cardwell notes, they have already absorbed the large start-up costs associated with deploying new systems and are now spending less on a per-unit and gross revenue basis to maintain those systems. Medium-sized firms may be closer to the roll-out phase, while smaller firms have yet to pursue large technology initiatives.

In the last 10 years, technology has become a core part of the apartment industry’s business model, leading firms to allocate a greater portion of their capital budgets to support new technology deployment, Cardwell says.

NMHC’s new Information Technology Investment Benchmarking Survey (http://www.nmhc.org/goto/4966) was designed to help companies make decisions about IT spending and compare their spending levels with those of peer firms. The NMHC members-only survey also offers a benchmark for comparing staffing levels. Among the survey’s findings, according to NMHC:

• Respondents spend .7% of their gross revenue on information technology (not including telecommunications services offered at the property level).

• Of that, approximately 19% is spent on discretionary projects intended to improve revenue. Nearly 20% is spent on consultants, and 12.6% is spent on outsourcing.

NMHC has begun a follow-up survey, with responses due by Jan. 16. Additional information on the survey is available by contacting Lauren Dwyer, NMHC Manager of Technology and MITS Operations, at [email protected] The organization also plans to conduct a survey on automated payments and issues related to paying rent and fees online, with the aim of studying ways to seek more uniform fees from credit card associations.