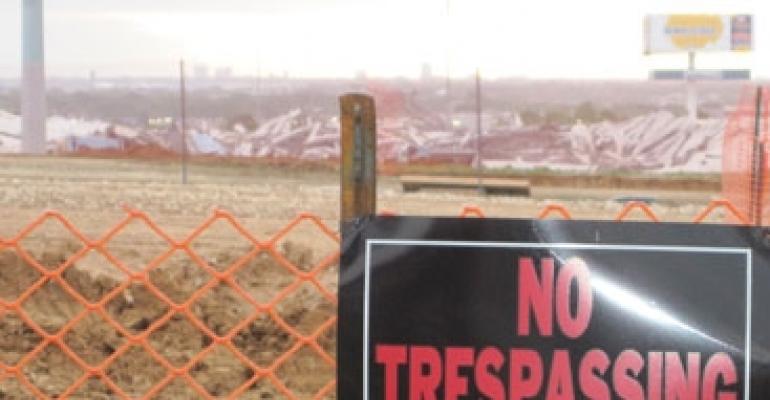 Irving, Texas — When Texas Stadium was imploded April 11, it took a village of demolition experts, contractors, city officials and police to make it all happen on cue at the crack of dawn. And the show didn’t come cheap. The implosion cost nearly $6 million, or 17% of the original price of the stadium, $35 million.

“The City of Irving has hundreds of employees who have been involved with this project for a long time. This is probably 24 months in the coming,” says Doug Janeway, team leader for the implosion project for the City of Irving, which owns the stadium.

Early on, workers began to remove the stadium’s 65,000 seats and trucks hauled dirt to the site, at times as many as 600 truckloads in a single day. “One of the first things that we did, we had to fill the bottom of the stadium up 40 feet from the floor to the top, that’s about 380,000 cubic yards of dirt to fill,” says Janeway.

And there was the problem of leveling the structure’s 388 columns and the 12 trusses holding up the roof. “We drilled over 2,800 holes in those columns and buttresses,” notes Janeway. It took nearly 1.5 tons of explosives to bring the stadium down.

At 7 a.m. on the day of the implosion, as 20,000 people watched from tailgate parties, parking lots, tents, office buildings and standing positions along the closed highways, fireworks lit up the sky above the former home of the Dallas Cowboys. When the explosives were detonated, the sound was deafening, as cascading booms shook the ground 750 feet away.

Blasts pulsed underfoot every half-second, 55 in all. In only a minute, it was over. As the stadium fell, a cloud of dust swirled up from the debris.

The storied arena, where the Cowboys played for 38 seasons and won 213 of 313 games, was reduced to rubble, with the exception of three pillars, which leaned but didn’t quite topple. That inspired Irving Mayor Herbert Gears to quip, “Now we’ve got Stonehenge.”

The demolition was a success, although the pillars had presented a challenge. “It’s probably the most complex delayed pattern I’ve ever shot. I’ve shot bigger, longer buildings, but this is very unique and unusual because of the trusses,” says Jim Redyke, president of Dykon Explosive Demolition Corp., based in Tulsa, Okla.

Crews threaded the detonating cord through the stadium after stripping the arena down. The cord is a thin tube containing explosives in its core. The fuse works at high speed, and the charges can be synchronized to detonate in sequence.

Asbestos was removed from the structure, built in 1971, to prevent particles from filtering through the air along with dust raised by the demolition. Asbestos had been used on sheet rock when the stadium was constructed, and on mirrors, tile and other equipment.

During the implosion, seismic equipment measured the impact of the blasts while other detectors monitored air quality afterward.

The Texas Department of Transportation will crush the cement and use it for reconstruction of nearby highways. The state agency has signed a 10-year, $15.4 million lease to use the site for staging as it works on roadways near the stadium. Stadium trusses will be used as artwork.

According to Mayor Gears, a $100 million pricetag for retrofitting the stadium to comply with the Americans with Disabilities Act was unaffordable for the city. And the cost to maintain the empty stadium was $225,000 per month. Renting the site to the state for construction staging actually provides the city with more income than it received from the Cowboys’ stadium lease.