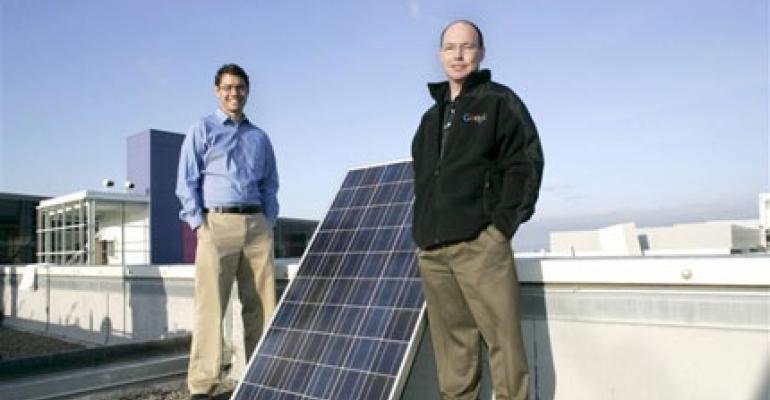 Building Owners See the Light By Increasing Use of Solar Power

Spurred by declining costs to produce solar power and an increase in state and federal incentives for adopting the energy source, search-engine giant Google Inc. and other property owners are turning to the sun for their energy needs.

For the moment, Google is leading the solar wave among office users undertaking what’s billed as the largest solar-power installation ever on a U.S. corporate campus. Its collection of low-rise buildings at the Silicon Valley “Googleplex” headquarters is considered perfect for installation of a solar-power system.

Most of the 9,212 solar panels that will be installed at Google’s 1 million sq. ft. headquarters in Mountain View, Calif., will be situated on the rooftops of the four main office buildings but parking lots also will be equipped with solar-panel structures that will generate energy and provide shade. The end product, slated to go on line in the spring of 2007, will power several office buildings at the company’s headquarters and offset about 30% of peak electricity consumption.

It is estimated that with large solar commercial systems priced at $7 to $8 per watt, the tab for Google’s 1.6 megawatt project will be roughly $11 million to $13 million, although the company declined to divulge a figure.

The solar system will save Google more than $393,000 annually in energy costs, or about $15 million over the 30-year life of the system, according to Andrew Beebe, president of Pasadena, Calif.-based El Solutions Inc. which is installing the system. At that rate, the system should pay for itself in seven to eight years.

“I think we’ve reached a tipping point where companies are realizing that you can be both green and profitable at the same time,” says David Radcliffe, vice president of real estate at Google and a former executive at Trammell Crow Co.

Costs decline
The good news is because of economies of scale, costs over time are projected to drop. A report from Navigant Consulting Inc. theorizes that under one scenario the U.S. market for solar installations in commercial buildings will skyrocket to $4.2 billion in 2010, based on a projected system price ranging from $2 to $2.20 per watt. In 2005, the U.S. commercial building market for solar installations totaled $640 million, based on a system costing $8 per watt, according to Navigant.

“I think we’re at the beginning stages of some very large commercial installations,” says Travis Bradford, president and founder of the Prometheus Institute for Sustainable Development in Cambridge, Mass. Experts say the cost of systems is dropping, thanks in part to a boost in manufacturing capacity for solar-power components and therefore cheaper solar-power equipment.

One of the driving forces behind that trend is the installers of solar-power systems who work with companies like Google, says Bradford. In some cases, installers finance the projects in-house while taking advantage of tax credits and incentives. The installers then pass along those costs to the customer, enabling some companies to support solar while keeping capital expenses off the balance sheet, Bradford says.

Corporate users still finance some solar-power systems, however. In that scenario, the installer sells all of the kilowatt-hours generated by a customer’s solar-power system, then the customer buys back only the power it needs at, for instance, a 10% discount locked in for 25 years.

Michael Polzin, a spokesman, says the giant drug store chain is installing solar power systems at 96 stores and two distribution centers in California, and 16 stores in New Jersey. Solar roof tiles will enable each location to generate 20% to 50% of its own electricity, or a total of more than 13.8 million kilowatt-hours a year.

Solar incentives
California is a solar power leader due to a $3.35 billion, 11-year solar initiative. The program accounts for 85% of the rebates for all of the major U.S. solar projects, Beebe says.

For businesses, the country’s most populated state offers a cash rebate of $2.50 per watt for installation of a solar-power system. Combined with a federal tax credit of 30% of the cost of a system, a California business can cover as much as half the expense of a solar-power installation, experts say. In Google’s case, that could add up to government breaks of roughly $5.5 million to $6.5 million.

Primarily because of state incentive programs in California and New Jersey, the number of commercial solar installations in the U.S. has jumped by 50% annually over the past few years, Beebe says. Other states active in promoting solar power include Arizona, Colorado and New York.

The key advantage of solar for commercial buildings is that electricity rates in most states are tied to peak use times such hot summer afternoons. Laws in most states allow big consumers to export to the power grid any electricity they generate that exceeds immediate needs, Beebe says. Companies can be “paid” – in the form of credits on their bills – for the most expensive peak energy they send to the grid during the day and can tap cheaper off-peak electricity at night when a solar-power system isn’t active, he says.

For his part, Google’s Radcliffe wants many more companies to become active in solar power – and even eclipse his employer, whose new system will produce about 2.6 million kilowatt-hours of solar power each year. He says, “I hope in a year from now that Google will no longer be the largest corporate solar installation in the U.S.”
0 comments
Hide comments
Related
Sponsored