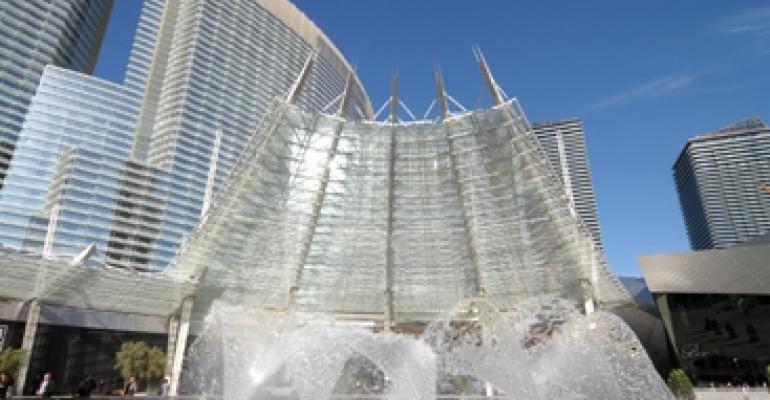 At the new $8.5 billion CityCenter complex in Las Vegas, little expense has been spared in creating a high-tech refuge — from the architecture of hotels and shopping space to the design of vast meeting halls with theatrical stages.

A joint venture between MGM Mirage (NYSE:MGM) and Infinity World Development Corp., a subsidiary of Dubai World, CityCenter is located on 67 acres in Las Vegas. The mixed-use project has multiple buildings, including a shopping center, offices and hotels with staggered opening dates. The newest hotel, the 4,000-room Aria Resort & Casino, opened on Wednesday.

Guest rooms are wired to adjust to travelers’ preferences and anticipate their needs. At the 61-story Aria and the Mandarin Oriental, curtains automatically part to display mountain or city views as a traveler enters the room, and a 42-inch, high-definition TV turns on.

The TV screen displays automated controls for room temperature and lighting, which a hotel guest can adjust to personal taste. Video and service requests also can be tailored through the remote control.

Even the nightstands are state-of-the-art, with seven-inch panels that use touch-screen technology. Using the panel, a traveler can request wake-up calls or dim the lights. Next to the bed a “good night” button lets the guest turn off the TV, stop the music, close the drapes and activate the room’s do-not-disturb notice, all with one push.

“Aria and CityCenter reflect a combination of innovation, energy and visionary design that we believe will reshape how the world views the destination resort experience,” says Jim Murren, chairman and CEO of MGM Mirage.

Communication is a priority, and more than 6,500 antennas and 2,900 wireless access points ensure that Wi-Fi is available in each room and across the resort complex. The antenna network provides wireless service across 14 million sq. ft.

With four ballrooms and 38 meeting rooms totaling 300,000 sq. ft., the Aria is poised to lure conventions and meeting trade. Three of the ballrooms have theatrical stages, and can hold groups up to 5,000 people.

The biggest ballroom spans 51,000 sq. ft. and can be divided into 10 meeting rooms. The resort also offers two ballrooms with 38,000 sq. ft. and one with 20,000 sq. ft. The Aria’s convention space is positioned over three levels, and provides built-in audiovisual systems, including high-definition video projectors.

The ballroom ceilings are a lofty 25-feet high.

Slot machine bases serve dual purposes as floor air-conditioning ventilation units to cool public spaces from the ground up, a method considered more energy efficient than cooling space from the ceiling down, according to CityCenter.

Pelli Clarke Pelli, an architectural firm based in New Haven, Conn., designed the 3.8 million sq. ft. Aria casino hotel, considered the centerpiece of the project. It has two curved steel and glass towers and its outer design includes a 270-foot long wall of cascading water.

Maya Lin, known for her design of the Vietnam Veterans Memorial in Washington, D.C., designed the Silver River sculpture in the Aria’s lobby, a 3,700-pound cast of the Colorado River made entirely of reclaimed silver.