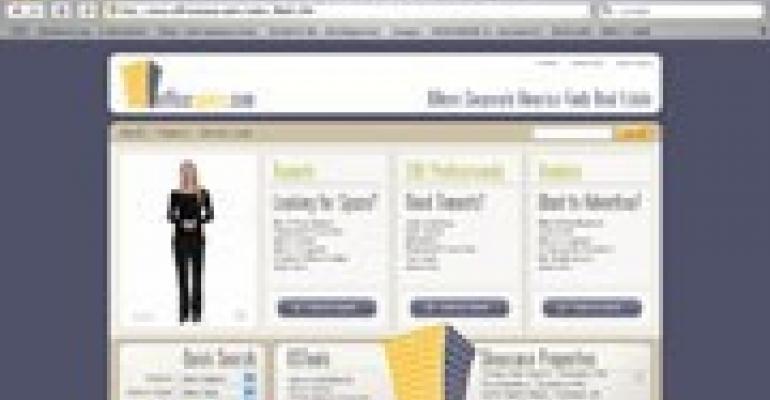 “Most current commercial Web sites list content for the benefit of the real estate community, the supply side of the business. Very little is geared toward tenants, the demand side of the business — unlike residential, where it is reversed,” Suryan says. “Commercial has always lagged residential when it comes to using the Internet to market properties for sale and particularly for lease.”

About three-fourths of all residential property sales last year were initiated by an Internet search. Steve Condrey, vice president of sales and marketing at office leasing and sales site BuildingSearch.com, believes commercial real estate will follow suit. BuildingSearch.com has been building its database for about a year. The domain name was registered 10 years ago.

But the commercial sector is slowly firming up its position on the Web as competition increases for domain names oriented toward that business. OfficeSpace.com is among the pioneers in e-commerce for the commercial real estate business. Launched in 1996, OfficeSpace.com is a free-of-charge listing service for more than 1 billion sq. ft. of property in seven U.S. markets and São Paulo, Brazil.

OfficeSpace.com makes money primarily by highlighting certain listings, offering memberships to real estate agents and selling market intelligence like pending corporate relocations. The site receives about 1.5 million hits a month and is set to grow next year to accommodate listings from anywhere in the U.S.

BuildingSearch.com, a competitor of OfficeSpace.com, currently features about 30,000 listings in California and will raise venture capital in the next four months to fuel a nationwide expansion, Condrey says. Advisers and investors include three former or current executives from Colliers International Inc. The Morgan Hill, Calif.-based outfit charges $25 a month to search its site, and $45 a month to highlight certain property listings as well as to allow searches.

For now, two publicly traded companies — CoStar Group Inc. (NYSE: GSCP) and LoopNet Inc. (NYSE: LOOP) — are the behemoths of Web-based commercial property listings. And more newcomers in the vein of BuildingSearch.com appear to be on the Web horizon.

Nonetheless, CoStar is unfazed. Andrew Florance, president and CEO of CoStar, recently told financial analysts that no emerging competitors have shown up on the company’s radar screen.

For its part, LoopNet keeps chugging along, consistently registering year-over-year growth of about 30%. To bolster its growth, LoopNet in August bought New York-based online commercial real estate listing service CityFeet.com for $18 million. LoopNet says it may snap up other small players like venture capital-backed CityFeet.com.

New York-based SmallBizRealty Inc. is fueling the growth of some of the small players. The company recently marketed for sale more than 160 generic domain names aimed at commercial real estate brokers, developers, owners, REITs and related businesses. Jeffrey A. Landers, founder and president, says his company has been buying the names since 1998 to ward off potential rivals. SmallBizRealty operates Offices2share.com, an online marketplace for office space.

“Purchasing these domain names is similar to making a real estate deal,” Lander says. “There is an initial investment, but if the domain names bring in new clients, there will be a significant return on that investment.”

Andrew Allemann, editor of the Domain Name Wire news site, says a desirable domain name typically costs a few hundred to a few thousand dollars. Larger sums are being paid for generic names with .com extensions, as Web users are more apt to type in .com than .net, .biz or other, less customary extensions.

“If you had the exact term that defines a whole category — like OfficeLeasing.com — that could easily be a six-figure sale,” says Ron Jackson, editor of trade magazine Domain Name Journal. “If you had one of the thousands of variations on the office leasing theme, it would be worth much less.”

Landers says he sees a “land grab” taking place for generic commercial real estate domain names like the ones in his portfolio — those not tied to a particular company or brand.

“I’m looking at these names as real estate themselves,” Landers says. “I consider these names unique and hard to replicate. These names are valuable.”