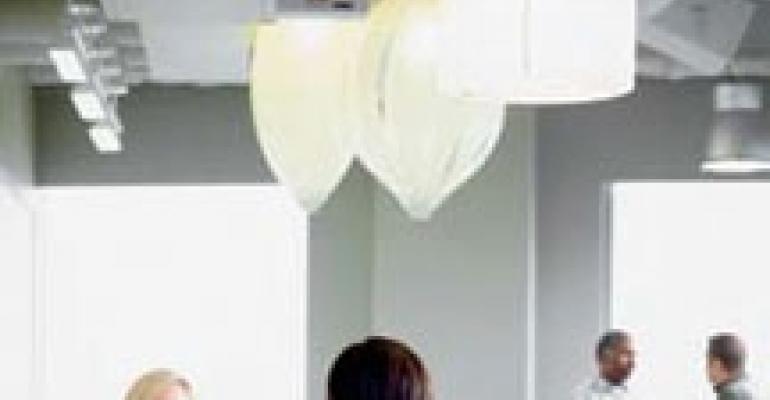 As technological advances unchain workers from the confines of a desk and office, the type and configuration of space that companies demand from real estate providers is changing. And despite the slow economy, alternative workplace strategies are increasing.

That’s according to more than 300 employers surveyed by Microsoft Corp. and CoreNet Global, an Atlanta-based corporate real estate association. The survey queried participants at CoreNet’s summit in Orlando last fall, and found that 77% of respondents expect alternative workplace programs to increase within three years.

“There is a trend away from fixed and assigned individual space to open, group and team-oriented space,” says Richard Kadzis, CoreNet’s director of special projects. “A landlord that recognizes the cost benefits for a client of a flexible work environment certainly would try to provide the physical environment and infrastructure to attract and retain that organization.”

Interestingly, while the use of personal data assistants and laptop computers may reduce the amount of space a company needs for its day-to-day operations, the survey found that companies use flexible building layouts, wireless networks and other mobility enhancements as a means of attracting and retaining employees. In other words, real estate remains an important component of a company’s culture even as it loosens the ties holding employees to the office.

“The two main reasons corporations are implementing existing alternative workplace strategies are about people,” says Katherine Randolph, director of unified communications at Microsoft. Specifically, survey respondents ranked attracting and retaining employees as their primary reason for alternative workplace programs, followed in importance by a desire to improve productivity and collaboration. Cost control, such as right-sizing the company’s space to its needs, was less important although Randolph expects cost control to become a bigger impetus as the economy slows.

With companies becoming less beholden to a physical space, landlords would do well to heed the call for flexible properties that help to attract and retain workers while affirming a company’s identity. Buildings that adhere to traditional configurations may find themselves losing tenants to their competitors.

One Austin company is preparing to forego leased space altogether by shifting to a network of home offices. Executives at staffing firm National Human Resources Group [www.nhrg.com] have purchased land to one day build a headquarters with additional space that will be offered for lease, but those plans are on hold until leasing demand improves. In the meantime, the company is letting the lease on its 1,500 sq. ft. office expire this year.

NHRG employees will work from home most of the time. When a physical gathering is necessary, groups will be able to gather at the company president’s home office, which will have a full-time telephone receptionist and desks for employees. “It was important for us to keep a space that is dedicated to the company,” says Marc Byers, recruiting manager at the firm. “But for the most part, everything will be done virtually.”

In preparation for the transition to a virtual platform, NHRG switched from an in-house to an internet-based database and moved its email service from its own server to a hosted exchange that interfaces with employees’ cellular phones and PDAs. All employees have webcams and free software with voice-over-Internet protocol (VOIP) service from Skype Technologies that enables them to conduct virtual meetings with sound and video.

NHRG began putting a few employees on a virtual office setup when they moved to other cities, Byers says. It was because that early experience worked out so well that the company decided to do away with its leased space altogether. If rents for high-profile office space come down in the next year or two, however, the company will probably choose a new space to lease or rekindle its development plans.

Corporations are gradually adopting technologies that enable employees to work from remote locations or collaborate on projects, according to Randolph at Microsoft. All of the employers surveyed last fall indicated that their employees use email, and many are adding emerging technologies.

For example, the use of instant messaging is increasing, with 65% of responding companies already using some form of IM and another 16% planning to implement it. “It’s not just for instant messaging, but to be able to see people’s availability through presence indicators,” Randolph says, referring to icons that show coworkers when an employee is online.

Fully 95% of survey responders use or plan to use Web conferencing, while 66% use VOIP conferencing and 67% use videoconferencing. Desktop video systems available today have brought videoconferencing within the reach of more companies, Randolph says. “With more cost-effective, Web-based videoconferencing solutions available, we can see why companies are more willing to make it much more accessible and useful for their end users than the traditional, room-based systems.”

Even in a mobile working world, real estate is an important component of productivity. Landlords and space planners can meet the needs of today’s workers by providing wireless connectivity and a variety of flexible work areas. For individual work, tables or divided workstations can provide privacy and a quiet environment, much like a library, Randolph says. “In another space, small amounts of hubbub by a group would still be appropriate.”

The office is still widely regarded as a hub for collaboration and social connectivity, but new technologies are becoming more readily available to keep the mobile and global workforce connected, says Dr. Prentice Knight, chief executive at CoreNet Global.

“What CoreNet Global members are saying is that our corporations want to retain the best talent,” he says. “To do that, we are seeing more flexibility in the definition of workplace and work style.”