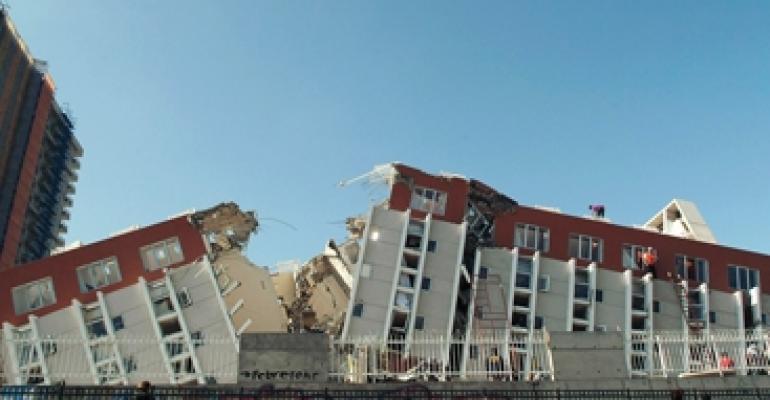 The earthquakes that struck Haiti and Chile in recent months —toppling offices, apartments, hospitals and homes, and taking more than 230,000 lives — have heightened interest in seismic risk among property owners and investors in the U.S.

A new report calculates the potential financial damage of an earthquake measuring 7.8 on the Richter scale along the southern San Andreas Fault in California, through Riverside, San Bernardino and Los Angeles counties, at $212 billion.

“That’s partly property damage from earthquake shaking. A little over half is because of fire following earthquake, like the kinds of fires that happened in San Francisco in 1906 and in Tokyo in 1923,” says Keith Porter, associate research professor at the University of Colorado in Boulder.

Porter was one of several authors of the seismic report, The ShakeOut Scenario, a project for the U.S. Geological Survey (USGS).

Many property owners and potential investors, including real estate investment trusts, have contacted experts like Porter and companies that perform seismic risk analysis or provide software programs to assess the vulnerability of buildings to quake damage.

Each year, 5,000 earthquakes strike the U.S., occurring in 39 states over the past century, according to the New York-based Insurance Information Institute. The chance of a 6.7 magnitude quake striking Southern California is 97%, and Northern California, 93%, according to USGS and other researchers.

However, only about 12% of Californians purchase earthquake insurance as a rider to regular property coverage, a drop from 30% in 1996, according to the Institute. Commercial real estate coverage was not broken out.

“They knew that they had risk, and one very common way of managing that risk is to buy earthquake insurance.” Porter used cat models to develop a risk profile for the buildings. The grocery chain then faced a choice of whether to spend millions of dollars to retrofit its properties to make them more earthquake resistant.

The other option was to reduce the chain’s financial exposure by transferring the risk through insurance that covers natural catastrophes.

Besides California, U.S. locations that pose significant earthquake risks include Western Washington State, Southern Alaska, Missouri, and Utah along the Wasatch Front, a chain of towns north of Salt Lake City. And property owners in those states must contend with special financial requirements.

“If you are a real estate investor about to buy a building with a commercial mortgage valued over roughly $10 million and that building is in earthquake country, the lender tends to demand a probable maximum loss (PML) study before it will underwrite that mortgage,” says Porter.

What the lender looks for in the study is an assertion by a qualified engineer that the probable maximum loss in a future earthquake for that building is less than 20% of the replacement cost of the building, says Porter. Typically, the borrower commissions the PML report and hands it over to the lender.

If the report asserts that the loss would likely be less than 20% of the building’s replacement cost, then the underwriting decision will normally be based on basic business principles. If the probable maximum loss is greater than 20%, the lender usually requires the borrower to get earthquake insurance to cover the lender’s risk.

For instance, a potential buyer for a $20 million apartment complex in Loma Prieta, Calif., where a devastating quake struck in 1989, might give a lender an engineering report showing that a magnitude 6.5 quake would cause $10 million in damage to the complex. In that hypothetical case, the lender might decide not to provide a loan because the damage could amount to half of the complex’s value.

Lenders fear that a major quake could cause such significant damage that borrowers would walk away from the mortgage, leaving the bank holding a damaged building that it may have to repair at its own expense.

How effective is software?

The standard software program used for at least a decade to determine seismic risk is called ST-Risk, from Risk Engineering in Boulder, Colo., says Porter.

A number of other companies have developed software programs, as well. VFA Inc., a Boston-based software provider, offers seismic assessment software, in addition to auditing programs provided to government and other clients.

The company uses guidelines published by the Federal Emergency Management Agency and the National Earthquake Hazards Reduction Program in its risk assessments, according to VFA. “VFA’s seismic assessment service provides organizations with a clear understanding of what corrective actions are required,” says CEO Jerry Kokos.

Assessing the effectiveness of seismic risk programs can be difficult, says Porter, since quakes occur so rarely. “Validation data are so expensive to collect. It’s very hard to test them. Oftentimes the best that we can do in creating the software is to say, we have used the best available evidence that’s out there.”

The magnitude-7 earthquake that struck Haiti Jan. 12, collapsing buildings and killing an estimated 230,000 people, caused up to $13 billion in damage. That’s the estimate of the Inter-American Development Bank, based in Washington, D.C., which finances development in Latin America.

The rare, magnitude-8.8 quake that struck Chile Feb. 27 was one of the largest in half a century. More than 700 people died, and the quake and tsunami that followed caused an estimated $8 billion in damage.

In the U.S., among the most memorable quakes are those that caused heavy damage and loss of life in San Francisco in 1906, and a 1994 quake that destroyed apartment buildings and other structures in Northridge, Calif. That catastrophe killed 72 people and caused $20 billion in damage.

In addition, a quake that struck the New Madrid Fault in Missouri in December 1811 was so powerful that eyewitnesses reported that the Mississippi River began to run backward.

That earthquake, and another that struck Missouri in 1812 were felt hundreds of miles away from the epicenter, says Porter. “Those earthquakes rang church bells in Boston and woke the president in the White House.”