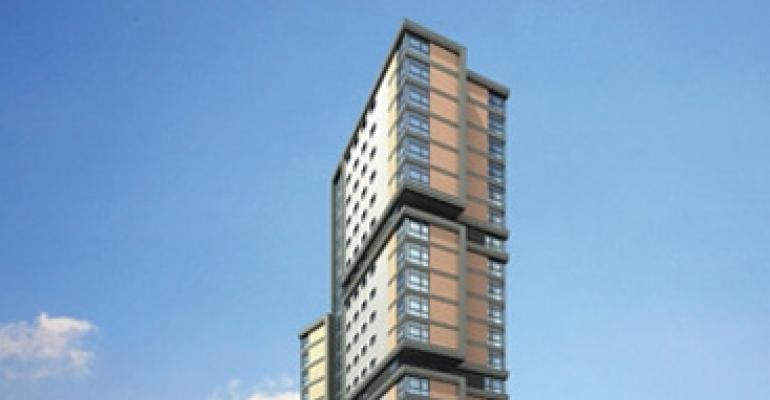 With High-Rise Debut, Modular Construction is Poised for Take-Off

In the words of an old ad slogan, when it comes to modular construction — You’ve come a long way, baby. Evidence of that is a 24-story, $34 million high-rise just completed in Wolverhampton, England.

It is the tallest modular building in Europe, according to its developers. Vision Modular Structures partnered with Fleming Developments UK to manufacture and install 805 modules, built in another location and transported to the construction site. The high-rise is the tallest of a group of student housing buildings of differing heights at Wolverhampton, completed in time for the school year that got under way just weeks ago.

The rapid build schedule for the tallest structure was 27 weeks, although the full project required a year to complete. If it had been built using conventional on-site methods, the construction could easily have taken two years.

The modules were built in a factory in Cork, Ireland, with the panels fully completed with decorating touches before being transported to the university site.

In addition to student housing, modular construction can be used for hotels, hospitals, restaurants and other purposes. Many commercial buildings manufactured off-site are indistinguishable from those built on-site using more time-consuming linear methods. In Basingstoke, Vision Modular is building a 10-story apartment building and two mid-rise buildings with a combined 162 units. The company’s scheduled construction time is just 10 weeks.

Though built of wood and trucked to the site, some buildings are then sheathed in brick, giving them a substantial look that defies common perceptions of modular buildings as cheap, temporary structures built with materials that won’t last. Today, quality modular buildings have expected life spans of 20 to 50 years.

In the United States, the $5 billion modular building industry is drawing interest from developers and investors intrigued by the possibility of cutting construction costs and time over traditional stick-built methods, says Tom Hardiman, executive director of the Modular Building Institute, based in Charlottesville, Va.

Going modular makes sense for quick-service restaurants such as Starbuck’s, MacDonald’s and Wendy’s, which require similar buildings in numerous cities, says Hardiman. “They get it in half the time. It’s easily 30% faster, and in some cases 40% to 50% faster.”

The more work that can be done off-site, the shorter the overall time necessary to engage costly construction crews for a project. And the sooner tenants can occupy a building, the sooner owners can derive revenue from it.

Currently, modular building garners 1% of the commercial construction market. However, it is poised to grow as economic pressures spur real estate investors and developers to trim costs, and as word gets out that modular commercial structures must meet the same rigorous local building codes as stick-built structures.

Another push for the modular industry comes from the trend toward environmentally friendly construction. Hardiman contends that many modular buildings are “greener” than the competition because there is less disturbance of the construction site and less waste. “At a conventional site you’ll see dumpster after dumpster of materials.” But with factory-assembled methods, less tonnage winds up at the landfill, he says.

By using modular housing from Champion Enterprises for the residences, about 13% of the project, owner Steiner & Associates was able to reduce labor and materials costs and increase profits for the project, completed last fall.

Champion, founded 55 years ago near Detroit, Mich., has built a name for itself as a leader in manufactured housing. It now has 27 manufacturing facilities in North America and Europe and has produced 1.7 million factory-built homes in North America.

Champion has thrown its hat into the commercial real estate ring by buying Caledonian Building Systems in the United Kingdom. Caledonian, a modular commercial leader, has built prisons, hotels, multifamily and other commercial projects.

Caledonian manufactured sections for a 1,200-bed residence hall being built for Sheffield University. For another project, in just 12 weeks, the company installed an 18-story student housing building in Brentford, Middlesex with 577 bedrooms and baths, dining facilities and other communal areas. It was completed in late summer 2006.

In DeSoto, Texas, Warrior Group, a modular development firm, has seen a rapid rise in revenue since the U.S. government became interested in the factory-built military housing — its specialty. The speed with which new housing could be erected, meeting strict military timetables and shifting troop assignments, was particularly important.

The firm’s revenue rocketed from $15 million in 2006 to $122 million in 2008, and is projected to reach $135 million this year, according to Gail Warrior Lawrence, president and CEO of Warrior Group.

Today, about 95% of the company’s projects involve creating housing for the U.S. Army Corps of Engineers. “We had a great year in 2008 and 2009 is shaping up to be another great year,” says Warrior-Lawrence.

Early on, her company partnered with a general contractor because it lacked project managers and superintendents, as well as the expertise to conduct estimates. “After a couple of years we said, ‘We can do this’, and we started building our own resources and infrastructure operations.”

Warrior is wrapping up projects at Fort Sam Houston, Fort Carson and Fort Polk, and is gearing up to construct a child development center at the naval air station in Fort Worth, Texas. The company has enough contracts for pending projects to keep the company busy for a year, and more contracts are expected.

That level of activity by a leading company bodes well for the industry, says the Modular Building Institute’s Hardiman. With only 1% of the commercial real estate industry currently committed to factory-built construction, the market is wide open. “There’s 99% room for growth.”