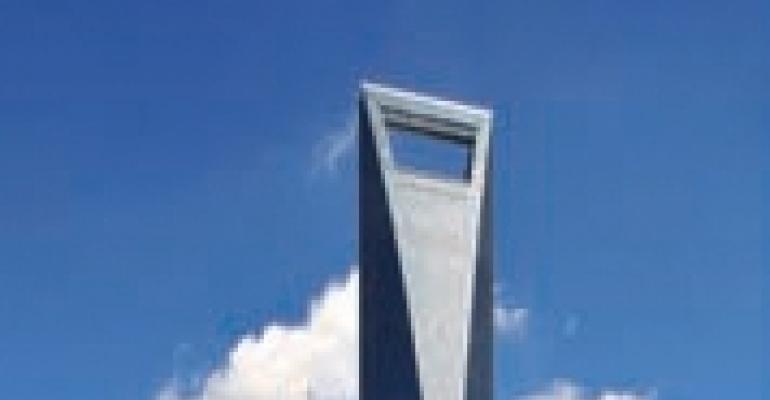 From wind-dispersing construction to on-site power generation and energy efficiency, the tallest structures under development today harness an assortment of technologies that can boost the performance of more conventionally sized buildings. And despite a recession-induced lull in new projects, the list of super-tall towers continues to grow in 2009 with the anticipated completion of a new record holder among soaring structures.

Developers completed more skyscrapers in 2008 than in any previous single year, adding four super-tall buildings that brought the number of structures exceeding 300 meters (984 ft.) in height to 38 globally. That’s according to the Council on Tall Buildings and Urban Habitat (CTBUH), which publishes a list of the tallest buildings completed each year. Based at the Illinois Institute of Technology in Chicago, the CTBUH facilitates exchanges among professionals involved in tall building design and development.

At 492 meters or 1,614 ft. and 101 stories, the Shanghai World Financial Center tops the list of tallest structures completed in 2008 and holds the record for the world’s tallest building in two categories, namely, height to top of roof and highest occupied floor. The Taipei 101 in Taiwan retains the title of tallest building overall, which it earned in 2004, thanks to a spire that reaches 509 meters or 1,670 ft. It won’t hold the title for long, however, since the Burj Dubai in the United Arab Emirates will soon top out at a cloud-piercing 2,600 ft., more than 800 meters high. In fact, the number of super-tall buildings could double by the end of 2010 as more than 40 projects under construction reach completion.

Innovations that have made the proliferation of soaring buildings possible include better construction logistics and made-to-order materials, says David Scott, chairman of the CTBUH and principal of New York-based engineering firm Arup. Just-in-time delivery of preassembled building components, such as air-conditioning units with embedded controls, reduces the staging area required onsite and speeds construction.

Likewise the ability to make custom steel components helps to eliminate waste associated with standardized parts, such as steel beams that must be trimmed for specific applications. “Beams are now made individually to spec,” Scott says. “You just program the computer and it cuts the beam to the given length, punches the holes in the given locations and you finish the beam the way you want it.”

Conserving resources is an important objective for tall-building developers, experts say. Many of the technologies employed stem from an effort to control costs, both in construction and ongoing building operations, so energy efficiency and sustainability are critical, according to architect Soren Simonsen, a partner and vice president of urban and environmental design at Cooper Roberts Simonsen Associates in Salt Lake City, Utah.

“It becomes very challenging to serve a lot of these buildings with conventional utilities because you’re talking about a density and loading on water systems and energy systems,” says Simonsen, who serves on the regional and urban design committee at the American Institute of Architects. “Some of these buildings have populations in them that exceed their city’s neighboring communities.”

At the 974 ft. Comcast Center in Philadelphia, the only U.S. building to make the list of tall structures completed in 2008, developer Liberty Property Trust uses an atrium cooling scheme that lets air heated by the sun flow upward inside double-paned glass walls to circulate air, according to Philip Oldfield, research coordinator at CTBUH. Developers of tall buildings have learned to provide natural ventilation on upper floors by blocking high winds with an outer shell that lets in a controlled amount of fresh air, enabling building occupants to open windows into the protected space.

Similar to the way automotive designers have produced increasingly aerodynamic vehicles, architects and engineers are learning to use building profiles that diffuse the incredible force of high winds and vortexes that sway tall buildings. The asymmetrical shape of the Shanghai Tower, planned for completion in 2014 at a height of 2,073 ft. or 632 meters, is expected to reduce wind loads by about 25%, Oldfield says.

While wind is generally a problem for tall structures, some developers are taking advantage of the near-continuous breezes on high. Turbines mounted between the twin 50-story towers of the Bahrain World Trade Center are designed to provide as much as 30% of the asset’s power needs, Oldfield says.

The understanding of wind forces, building vibration and sway derived from tall building construction has helped designers deal with similar problems in smaller structures, Scott says. Similarly, super-tall buildings have borrowed techniques from smaller projects, including braces that are designed to absorb energy in an earthquake and also work to handle wind-driven building movement.

Innovations for moving people within a massive structure may prove useful to conventional developers as well. Those include double-decker elevator cars, in which passengers enter one level for even numbered floors and another for odd-numbered levels. Destination selection control software is available to group passengers by their destination floors, directing everyone headed for the 25th through 30th floors to one car, for example, while a group needing to reach the 31st through 35th floors is directed to another car. The result is fewer stops made and less power used, Oldfield says.

While it may be another 10 years before a building tops the Burj Dubai’s height, developers will continue to push the height envelope as growing urban populations increase the need for and profitability of dense development, experts say. And unlike the office towers that have characterized U.S. skyscraper uses to date, look for those future structures to support residences, hotels and mixed uses, chiefly in Asia and the Middle East.

“Along with increasing height, we are seeing a paradigm shift in how and where tall buildings are constructed, as well as stronger and more aesthetically pleasing structures that are dramatically changing the skylines of cities in Asia and the Middle East,” Oldfield says. “Despite the economic difficulties our world currently faces, innovators will continue to construct tall buildings, improving the sustainability, infrastructure, and beauty of our urban centers into the foreseeable future.”