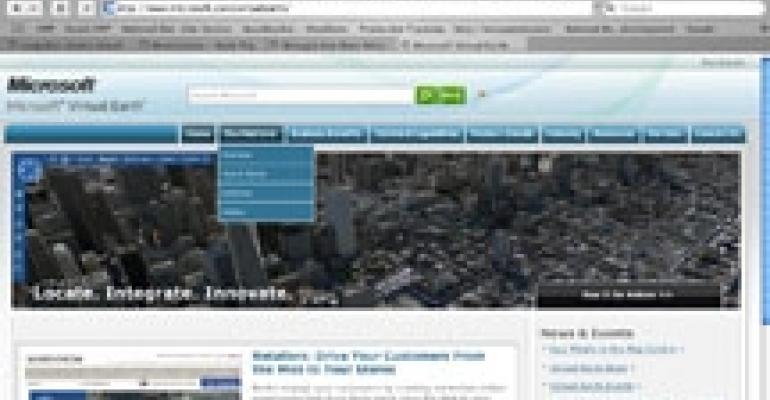 Since its debut in November 2006, Redmond, Wash.-based Microsoft has captured markets in North American population centers through its photography and 3-D technology, and built up its image libraries, Sampson says.

As with Google Earth, Microsoft’s approach updates the standard of aerial photography that prevailed for decades in the commercial real estate industry. Providing 3-D views of a building gives potential investors and developers a clearer image of the structure’s exterior from several viewpoints, particularly the front of the building.

“Basically what we do is we go out and take photographs of the city from an aircraft. That gives us the foundation to create these photo-realistic renderings of each one of the buildings in that city. Then we build these 3-D models. We colorize them and create an image that is going to be an image that people view as real,” Sampson says.

Although it’s open to any type of plane that can capture the right images, the company’s aerial image partners have mainly used Cessnas. For 3-D imagery, Microsoft has worked with Rochester, N.Y.-based Pictometry, and with Phoenix, Ariz.-based Aerials Express.

Reviews that contrasted the Microsoft and Google mapping and image technologies pointed out that Virtual Earth did not require a separate software application but could be integrated with the browser. However, the reviews also noted that the early version worked only with Internet Explorer.

“Google Earth is a CD-Rom or an offering that is based in the desktop,” Sampson says. “Google Maps is the Web experience. Our offering is focused exclusively on the Web platform experience.”

Microsoft has offered satellite imagery since 1996, and supplemented the satellite images with aerial photographs taken during plane flights. “People weren’t satisfied with seeing an air conditioner on top of a piece of property,” Sampson says. Investors wanted additional, detailed views.

Each month, Microsoft adds 15-50 terabytes of data to its image library, or one trillion bytes of storage, or 1,000 gigabytes. “You can have Cedar Rapids, Iowa, updated with that imagery, or Guantanamo Bay, Cuba,” says Sampson.

Potential clients can check out the service on Virtual Earth’s Web site, but they must pay if they want a commercial use license.

“It’s free to look at when you go to our portal site. But if you want to license the platform, you either pay by the transaction, or you license it upfront,” Sampson notes.

“A transaction is pretty simple. When I make a request and get an image back on my computer, that’s one transaction. That one transaction is a fraction of a penny, less than one half of a penny. If you said, I’m not interested in your transaction, I just want to buy it upfront, the entry free to license the platform is roughly about $8,000.”

“We want to continue to expand that image library, to capture the full global experience,” says Sampson. “We want to provide business intelligence analytics — software that gives commercial real estate investors and developers and property managers the ability to do some really interesting ‘What-ifs.’ For instance, the scenarios might allow potential investors or owners to consider the noise effect on their property of widening a street from two to four lanes.

“From my experience, the Virtual Earth imagery is much more crisp, as opposed to the Google mapping. I’ve found the controls a lot easier to use, in navigating the maps,” says Matthew Kornfeind, manager of marketing and technology at Coldwell Banker Commercial. The program now works with several browsers, he says. “We actually use Virtual Earth to power our listing engine — CBC worldwide.com. We have over 15,000 commercial listings.”

Coldwell Banker Commercial agent Allison Pochapin, based in Pittsburgh, Pa., says she does not use the service in listing her multifamily properties, but she does find it helpful when assisting an investor who is considering a commercial building.

“I have looked at hundreds of units with buyers,” Pochapin says. “I’ll use whatever marketing a property has. I know a lot of buyers use them both [Virtual Earth and Google Earth]. It makes sense. I think it’s very useful in the real estate industry, no matter what type of property it is. If a person isn’t familiar with an area they have the opportunity to see the area from various viewpoints, before going to see it in person.”

An online glimpse can save the cost and time of a trip to view a property, Pochapin says — if the building image or the setting isn’t to the buyer’s liking.