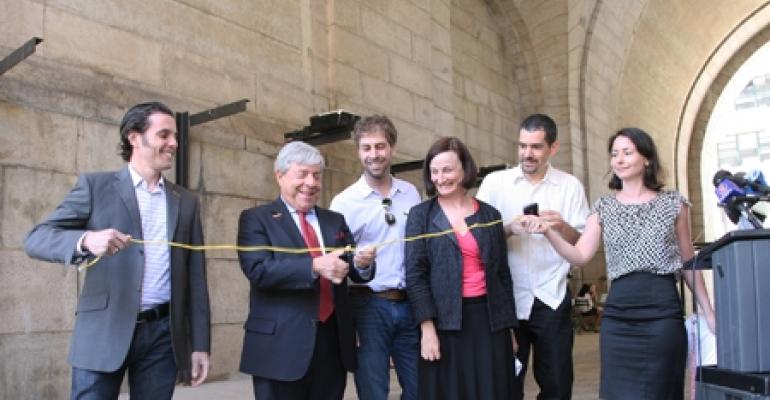 The largest commercial landlord in one Brooklyn neighborhood — Down Under the Manhattan Bridge Overpass (DUMBO) — is taking infrastructure development to the airwaves.

As part of a public/private partnership, Two Trees Management has helped to establish free wireless Internet access on every street, park and plaza in the 12-block neighborhood of 3,624 residents.

In addition to Trees Management, owner of 3 million sq. ft. of commercial space in 13 buildings on the Brooklyn Waterfront, the other players in partnership include the tax-funded DUMBO public improvement district and NYCwireless, a non-profit organization that promotes free Wi-Fi access in New York City.

“Streets are the backbone of a community, and being thoughtful about their design and function should not be limited to the physical structure,” says Tucker Reed, director of special projects at Two Trees. “Today, free Wi-Fi is an essential component of public space design.”

The June 2 kickoff of DUMBO Wi-Fi marked the first time that a free wireless service had blanketed an entire New York neighborhood. Separately, AT&T and the City of New York this month launched a five-year program to bring free wireless hotspots to 20 parks across the city’s five boroughs.

In addition to streets, DUMBO Wi-Fi serves the northern portion of Brooklyn Bridge Park between the Manhattan and Brooklyn bridges, the Archway under the Manhattan Bridge and in the Pearl Street Triangle.

Promoters tout street-level Wi-Fi as the latest advancement in a long list of innovations in DUMBO. The area has experienced an urban renewal through the green transformation of abandoned manufacturing buildings into a thriving residential and office district.

The neighborhood has become a hub of start-ups and entrepreneurial companies, served by an abundance of shopping and dining venues.

Free Wi-Fi should help to attract additional businesses to the Brooklyn Waterfront, according to Alexandria Sica, executive director of the DUMBO business improvement district.

“We are encouraging people to step out of their offices and homes and engage with one another and the neighborhood in new and different ways,” she says.

“In DUMBO, you can put together a proposal while gazing at the Brooklyn Bridge and all of Manhattan. Creativity can literally flow into the streets.”

And more businesses mean new users for the commercial space owned by Two Trees, which funded the initiative.

It cost $65,000 to purchase and install access points and point-to-point rooftop links for the system, which uses equipment from Ubiquiti Networks, according to Sica. The business improvement district will manage and maintain the service.

Two Trees expects DUMBO Wi-Fi to encourage people in the district to collaborate outdoors and build a sense of community, according to Reed.

“We expect that DUMBO’s strong workforce — made up of entrepreneurial, early tech adopters largely between the ages of 22 and 40, as well as many creative businesses, artists, cultural galleries and trendy retail shops and boutiques — will take full advantage of this new neighborhood amenity,” says Reed. “This neighborhood has always been a pioneering district.”

Risks and rewards
At least 110 U.S. municipalities offered citywide Wi-Fi Internet access as of June 7, according to the website MuniWireless.com, which tracks city-owned wireless services.

Another 84 cities have large outdoor Wi-Fi hot zones, mostly in parks or downtown areas, according to the website.

Benefits of providing wireless connectivity are easy to see. Residents and visitors gain convenient Internet access on laptops, phones and other mobile devices.

Yet there are risks when a government entity steps into the role of communications service provider, according to Paul Dowling, president of Believe Wireless Broadband, an Internet service provider based in Owings Mills, Md.

The chief problem that arises with government-owned wireless services is a lack of financial incentives for continued investment, says Dowling.

That contrasts with a private company, which must maintain and improve its service over time or lose customers and income.

Communities and landlords can work together to provide ubiquitous wireless access, but it’s a good idea to limit the public sector’s involvement to streets, parks or other open areas where there isn’t enough demand for private providers to offer Internet access, says Dowling.

Building interiors are a different story, however, due to the weakening effects of walls on wireless signals. Communities are better off letting private Internet service providers tackle the challenge of setting up and maintaining Wi-Fi in inside buildings, says Dowling.

“This ensures there is continued broadband investment and expansion while offering a free 3G offload option in areas that aren't commercially viable.”

3G, or “third generation,” refers to data-rich cellular phone technology that has become an industry standard over the past decade.