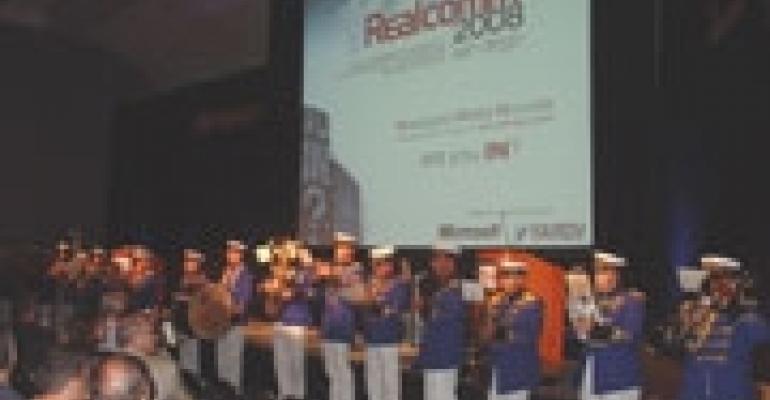 American commercial real estate and technology companies need to get leaner and more innovative to meet the challenges of global competition and rising oil prices. That was the strong message delivered at the 2008 RealComm conference in San Diego last week.

“The real estate boom is out of control” overseas, particularly in parts of the Middle East, China and India, RealComm founder and CEO Jim Young told commercial real estate and technology industry leaders at the San Diego Convention Center. “We’re seeing cities spring up that used to take 100 years.”

The new cities, such as those in the United Arab Emirates and other rapidly growing countries, will have a powerful thirst for oil, Young warned, and they will compete for natural resources. When the price of oil hits $200 a barrel, it will have a profound effect on the U.S. lifestyle. “That will change our world. We have got to innovate,” to develop building technologies that are less reliant on oil.

American commercial real estate and tech firms will also be buffeted by the continuing shift of wealth overseas, through sovereign wealth funds, Young said. “Twenty percent of you will work for foreign companies — they will come and purchase our companies.” The weakened U.S. economy and faltering dollar, which has lost value compared with the euro and other currencies, have made American companies more vulnerable to overseas investors.

Mark Kingston, president and CEO of Houston-based Argus Software, agreed that when the price of oil rises to $150 to $200 a barrel, “You’re going to see us adapt as a country.” He acknowledged that U.S. firms have lagged behind companies in a number of other countries in adapting to new energy sources, but took that in stride. “I’m not doom and gloom. I believe the United States is one of the most exciting and innovative countries in the world.”

Throughout the conference, seminars focused on new developments, including software and automation technology, that can help building owners and managers streamline operations and accounts. New products highlighted such “intelligent building” features as wireless Internet, automated lighting and heat controls, and remote access to maintenance programs.

Microsoft’s entrance into the commercial real estate industry with its Virtual Earth 3D program was a highlight of the opening session and a topic of explanatory seminars scheduled during the remainder of the conference. “It’s simply one of the largest imagery databases in the world,” said Chris Sampson, director of Virtual Earth sales and business operations.

Designed to go head-to-head with the popular Google Earth, Microsoft’s program uses building models fashioned from photographs to create realistic virtual perspectives of buildings and neighborhoods. The images can be used by investors considering the purchase of a particular building in its setting, for example.

“I could be in London or St. Petersburg, Russia, and take a look at a parcel of property” back in the States, Sampson explained. The technology allows a viewer to see angles and details of a structure that weren’t previously available.

Microsoft has made satellite imagery accessible since 1996, and has supplemented the satellite images with aerial photographs taken during plane flights. “People weren’t satisfied with seeing an air conditioner on top of a piece of property,” Sampson said. The investors wanted better images — shots of the front of the building, for instance.

Microsoft now has an extensive collection of images from at least 200 cities, and it is continuing to photograph and provide new pictures of structures in cities around the world, Sampson said.

Because the Virtual Earth technology allows investors to view property exteriors without having to travel to a city for a preliminary look, it is considered innovative and energy saving.

But there are other ways that commercial real estate-related companies can improve their efficiency and make better investments. One important step would be to improve due diligence with regard to property and financing, said Anant Yardi, president and CEO of Yardi Systems. The Santa Barbara, Calif.-based asset and property management firm represents more than 5 billion sq. ft. of commercial space worldwide.

Neglect of due diligence is what led the residential real estate and financing industries into the subprime crisis, Yardi said, and that in turn led to drastic and costly write-downs at major banks and financial institutions.

Too many companies investigate, but have a tendency to stick with pre-disposed decisions, he said.

“In this day and age of Sarbanes-Oxley [an accounting reform law enacted in 2002], how could we find ourselves in a situation where we are writing down $150 billion? We lost sight of objectivity.”