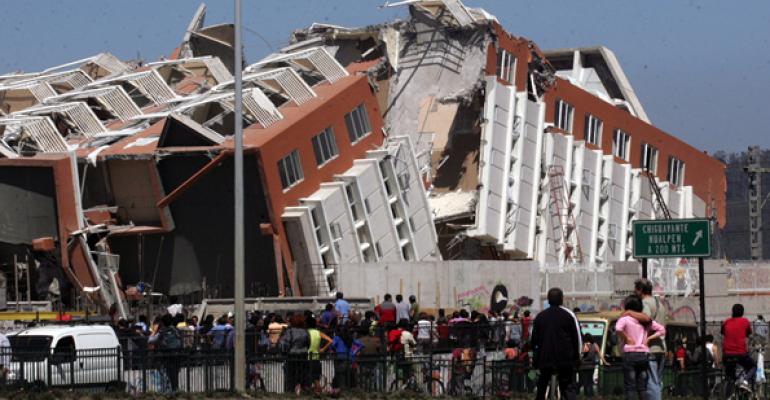 Reflexx Aims to Help Building Owners Bounce Back From Earthquakes

The magnitude 5.8 earthquake centered in Virginia that affected the East Coast in late August and the much larger 9.0 temblor that hit Japan in March both serve as reminders that seismic activity is a risk to commercial real estate everywhere.

The Virginia tremor caused between $200 million and $300 million in damage, according to one estimate while the Japan quake, and subsequent tsunami, has cost 100 times as much—close to $325 billion.

And when a quake wreaks widespread wreckage, demand can quickly overload the structural engineers and construction contractors called in to make damage assessments and repairs. As a result, many commercial buildings are put out of operation while landlords wait to learn whether the spaces are safe to use. If repairs are required, it may take weeks or months before a contractor can complete the work, due to the queue of properties that may be in line for repairs.

“Building owners and managers are required to wait in line for their buildings to be visually inspected and tagged by city officials, or evaluated by an engineer in order to assess the status of their building,” says Farzad Naeim, director of research at John A. Martin & Associates, a structural engineering firm based in Los Angeles. Naeim is also the president of the L.A. Tall Buildings Council and a past president of the Earthquake Engineering Research Institute.

“Even if you have an engineer in place before an extreme event happens, it may only reduce the wait time for a visual inspection and assessment from weeks to days,” says Naeim. “But many buildings need to make decisions within minutes.”

That’s why Naeim worked with Digitexx Data Systems, a structural health monitoring firm in Scottsdale, Ariz., to develop software that would provide more rapid and detailed feedback on a building’s condition after an earthquake. The fruit of that labor is the new Reflexx Smart System for Buildings, introduced to the market in June as a subscription-based service.

Something old, something new

Reflexx uses standard, movement-measuring accelerometers installed at key locations throughout a building. A key feature is its software, which analyzes data collected by those sensors with sophisticated structural algorithms based on widely accepted engineering methodologies.

Designed to be a turnkey product, Reflexx detects damage and evaluates building performance during a seismic event and translates that data into color-coded damage maps and floor-by-floor reports on a property’s structural health within 15 minutes of an earthquake. More detailed reports are sent for analysis to either a structural engineer at Digitexx or an engineer designated by the client. Within 48 hours of a quake, Digitexx sends an engineer to the site for a visual inspection.

Reflexx also estimates damage costs and repair time expectations for various building components, down to computer servers, ceiling tiles and heating/ventilation and air-conditioning systems. Those estimates can help a building owner plan for repairs and reoccupation.

Digitexx expects hospitals, schools and other critical facility operators to be among the first adopters of Reflexx, according to Angela Miller, the firm’s marketing director. The system could serve commercial real estate owners just as well, she says, and will be particularly useful for customers managing multiple buildings.

“Within 15 minutes of an earthquake, they could have a Google Earth map with colored lights of which buildings are damaged and which buildings are okay,” Miller says. “You know what’s going on with your buildings, so you can be the first on the phone with venders to arrange repairs.”

Reflexx subscriptions vary depending on the building’s size, number of floors, overall shape and other variables. The fee can be less than $1,000 a month, says Miller.

Digitexx is still in the early stages of marketing Reflexx and hasn’t yet deployed the system for a commercial customer. But Greg Hulbert, managing director in the Palo Alto, Calif. office of Jones Lang LaSalle, predicts that owners of critical facilities such as data centers will be interested in the product.

“It would be useful for those kinds of buildings where [reducing] downtime is super important,” says Hulbert, who runs the brokerage firm’s project and development services team for the Northwestern United States. A resident of the San Francisco Bay area since the 1980s, Hulbert has worked extensively with building codes in earthquake zones and helped to bring properties back online after damaging quakes.

Downtime generally increases with the number of properties waiting to be inspected by city officials after a seismic event, says Hulbert. The same is true for the wait time required to obtain engineering assessments and plan repairs, or bring in contractors to do any needed shoring-up, fixes or rebuilding. “When there are lots of buildings and a limited number of inspectors, that’s the challenge,” he says.

With a product like Reflexx, property owners can point engineers to the damaged sections of a building, and be ahead of the pack in arranging repairs with contractors.

“It will limit downtime, more than anything else; you can quickly know what areas are most important to fix so you can use the building again,” predicts Hulbert. “If you’re prepared with your plan quickly, you can say, ‘We’re ready to go and here’s what we need to fix.’”