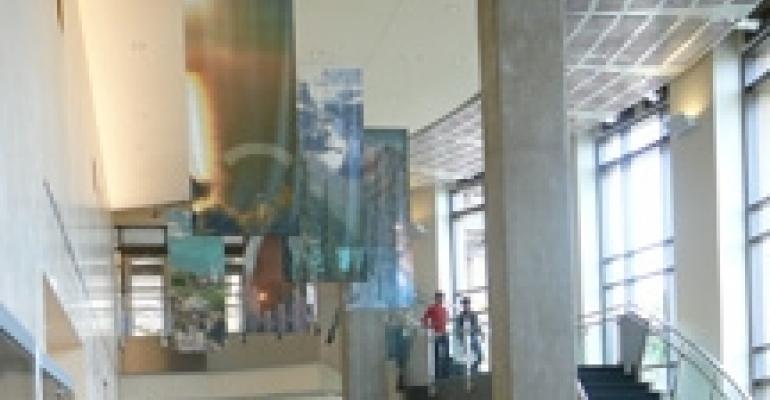 Sabre Saves $10 Million as it Shifts Tech and Workplace Strategy

Flexible workspaces that promote desk sharing and collaboration have been around for more than a decade, but a Texas-based company that has embraced space sharing for a mobile workforce is still finding ways to fine-tune the model.

By 2006, the company had moved about half of the 3,000 employees who worked in its Southlake, Texas headquarters operations into two new office buildings that earned LEED Silver ratings from the U.S. Green Building Council.

Since then Sabre — the parent company of Travelocity, Sabre Travel Network, Sabre Airline Solutions and Sabre Hospitality Solutions — has done away with private offices and installed shared cubicles for everyone, even its C-suite executives.

At its headquarters, the company provides one cubicle per 1.35 employees compared with one workstation per 0.81 employees when seating was assigned.

That density enabled the private company to vacate three leased office buildings in the Dallas-Fort Worth area and consolidate employees into the two LEED-certified buildings. As a result, Sabre halved its footprint to 470,000 sq. ft., down from 1.04 million sq. ft. in 2006.

With more than 9,000 employees in 59 countries, Sabre is gradually implementing similar workplace strategies at its offices outside the United States.

Sabre executives say that the shift to a flexible work environment reduced real estate costs per employee by half at the company’s headquarters and is saving about $10 million in annual operating expenses.

Sabre details its ongoing efforts to minimize the company’s environmental impact and use real estate more efficiently in a case study published this month on its Website. The report, available at http://www.sabre-holdings.com, is titled: Sustainable Business Transformation through Workspace Innovation.

Along the way, Sabre made some surprising discoveries about ways technology can foster productivity and employee satisfaction. As the company implements alternative workplace strategies at its offices around the globe, Sabre and its real estate service provider, Jones Lang LaSalle, are learning expanded uses for technology that is already part of the plug-and-play workplace.

Changing needs
When Sabre first did away with private offices and desktop computers, it replaced them with cubicles and a virtual network. Then, as now, employees carried their laptop computers with them and worked individually or in groups organized by project.

When working at the headquarters or at one of the company offices scattered around the globe, an employee set up shop in an available cube to snap his computer into a docking station. The employee then logged in to a telephone handset to have phone calls routed to the telephone he was using in the cube.

Today, Sabre has dispensed with docking stations in favor of beefy wireless network connections throughout its buildings, according to Leilani Latimer, Sabre’s director of sustainability initiatives. “The reason we got rid of the docking stations is that we started having different [types] of laptops,” she says. “It turned into a maintenance and cost issue.”

The company still relies on a routable telephone system developed by Cisco Systems, and has expanded its versatility. While Latimer, who is based in San Francisco, can log onto the handset at a Sabre cubicle in Texas and immediately receive calls made to her own number, the handset option doesn’t work in hotel lobbies, coffee shops or other locations where Sabre are working while on the road.

That’s why many Sabre workers have installed software on their computers that connects to the Cisco network via voice-over-Internet protocol (VOIP) technology. With that application installed, a handset becomes unnecessary and the worker can make and receive calls through their computer with a high-speed Internet connection.

A sense of place
One of the most difficult adjustments some Sabre employees had to make was to give up the prestige associated with a private office, says Latimer. Others missed having an assigned workstation where personal items affixed to the walls helped to make the space their own.

The answer to that need came from an unexpected place. SabreTown, the company’s fledgling social networking system, hadn’t caught on very well before the company transitioned to shared cubicles, says Latimer.

After the change left workers without a place to hang pictures or decorations, however, employees increasingly turned to their individual SabreTown pages to provide a sense of personal space within the new office culture.

Today, SabreTown pages display employee pictures and achievements, help individuals meet other employees with shared interests, and foster collaboration. “There was even an evolution in the way we give employees awards,” says Latimer. “We give a virtual award on their profile page as opposed to a block of glass.”

“Half the space meant a higher usage rate, so we had to provide a more aggressive service level than when their portfolio was larger,” says Smith.

In other words, a higher ratio of employees to cubicles means that everything in a building, from tables to elevators to cafeterias, undergoes more intensive use. “Wear and tear on all the finishes was amplified, so our preventative maintenance had to be increased,” adds Smith.

Fear of swine flu was raging about the time that Sabre made the move to shared workstations, and employees wanted assurance that the telephone and fixtures they were using weren’t harboring germs from the person who used the same cube the day before.

To keep microbes at bay, cleaning schedules changed from a few times a week to a system of roving janitorial teams that cleaned rooms and surfaces as they were used.

The new standard?
The world’s largest and most successful companies demand flexible workspaces with the sort of high-tech infrastructure that Sabre describes in its report, according to Richard Kadzis, spokesman and director of membership at CoreNet Global, an Atlanta-based corporate real estate association.

Traditional office layouts, including private offices and assigned cubicles, are designed to accommodate specific numbers of employees, explains Kadzis. By switching to owned or leased space with a smaller number of shared workstations, a company can lower its real estate costs without losing the ability to quickly accommodate new hires in the space if the business needs to expand.

“This is all about ultra-efficiency,” says Kadzis.

Landlords must be flexible if they hope to lease office space to these cutting-edge corporations, emphasizes Kadzis. Buildings need to offer wireless connectivity throughout, as well as energy-efficiency and environmentally responsible operations.

“It is a tenant’s market,” says Kadzis. “If a landlord can’t deliver the space with the necessary flexibility, or if the design is overly traditional, they will run into problems.”