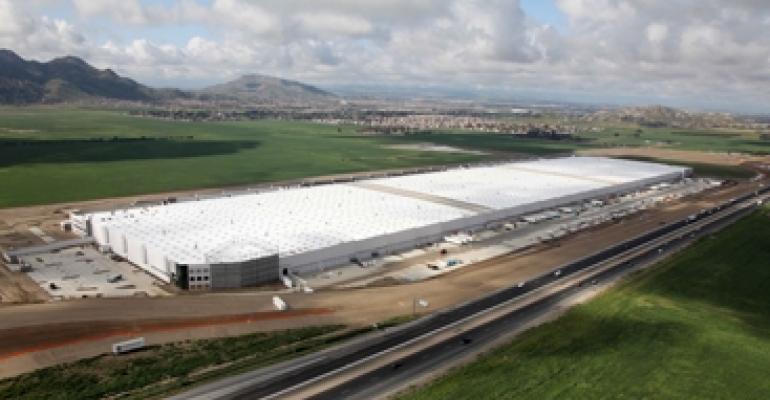 One of the largest buildings in California will set a new standard for automated, energy-efficient warehousing when it opens this October in the fast-growing Inland Empire industrial market.

“This is the next generation of automation in logistics,” says Iddo Benzeevi, president and CEO of Highland Fairview Properties, the project’s developer.

“This building has the most advanced building-automation robotics coupled with being the largest green building of its kind in the United States, and probably in the world.”

Highland Fairview constructed the $250 million building in Rancho Belago, Calif., to suit Skechers’ needs, and the retailer is on a 20-year lease.

Because Skechers is investing roughly $100 million to automate the space, however, the company also took a 50% ownership position in the building, according to Benzeevi.

Based in Manhattan Beach, Calif., Skechers (NYSE:SKX) is the second largest footwear brand in the United States, and racked up net earnings of $136.1 million in 2010 on $2 billion in sales.

The quantity of construction materials that went into the project is staggering, and included some 140,000 cubic yards of concrete, 800 miles of steel rebar and 700 miles of wiring, according to Skechers. The fire-suppression system alone required 14 miles of pipe to complete.

Yet it is technology as much as size that makes Skechers’ new facility remarkable. Lighting can be switched on and off by activity sensors and is powered in part by on-site solar panels covering about 200,000 sq. ft. of the roof. Eventually, the entire roof will be covered in solar panels, according to the developer.

Energy efficiency was a necessity, according to the developer. With 81 million cubic feet of enclosed space, it would require millions of dollars in electricity costs to circulate air through the building interior with conventional, mechanical technology.

Instead, fresh air is drawn through louvers facing the prevailing winds, eliminating the need for energy-intensive climate control systems in the majority of the space.

“The design is a paradigm shift, a technological breakthrough that gave us the ability to get the building to that size and still be green,” says Benzeevi. “This is 100% natural ventilation.”

The structure is built to meet the Green Building Council’s Leadership in Energy and Environmental Design Gold (LEED Gold) criteria. If the application is approved, the building will be the largest LEED-certified building in the nation.

“It would be an unbelievable achievement to do a building of this size and even get LEED Silver,” says Benzeevi. “Smaller buildings are easier to build green, but when you’re doing something that can encompass 40 football fields inside, it’s not that easy.”

Human hands will seldom touch merchandise from the time it enters the distribution center until it emerges for pickup at one of 270 truck bays.

An automated storage and retrieval system of conveyor belts and robotic lifts will whisk shoes to and from densely packed storage racks that stretch to a height of 50 feet.

The automated system from Japan-based Daifuku Co. will enable Skechers to move as many as 20,000 pairs of shoes in an hour, compared with about 7,000 pairs per hour today.

“The speed and productivity of the equipment are truly remarkable, and will allow Skechers to triple our current shipping capacity,” says David Weinberg, chief operating and financial officer at Skechers.

“In addition, we’re very proud of the building’s green features that will reduce fuel and energy usage.”

In its existing network of warehouses, Skechers’ goods are handled three times between arrival and shipment to stores. Workers must move shoes by forklift and by truck between warehouses, adding to time and labor costs within the distribution centers.

The Skechers distribution center is the first phase of Highland Fairview Corporate Park, planned to provide 40 million sq. ft. of logistics space over the next five to seven years.

Under development by Highland Fairview Properties, the park is south of Highway 60 between Theodore and Redlands boulevards.

The Skechers project epitomizes a trend toward massive distribution centers, particularly in Southern California, according to John Husing, chief economist at the Inland Empire Economic Partnership in San Bernardino, Calif.

Since the end of the recession, companies have increasingly consolidated multiple warehouses into single, large distribution centers to achieve greater economy of scale.

Consequently, virtually every space larger than 500,000 sq. ft. in the Inland Empire is occupied, while the smaller-sized industrial stock in the region wrestles with a vacancy rate of about 9%.

“Anything new being built is gigantic,” says Husing. “There’s hardly anything under 600,000 sq. ft. under construction.”

More importantly, Skechers’ new distribution center will serve as the company’s headquarters for operations in the United States and Canada, with a retail store and 20,000 sq. ft. of offices in the same building. Wokers will include both white-collar and blue-collar employees

“We’re finally seeing some of the higher-end jobs associated with logistics coming here,” says Husing. “With this move by Skechers, it could be a quantum change because these [companies] have begun to understand the importance of the supply chain to what their business is about.”

CB Richard Ellis helped Skechers evaluate its space requirements and negotiate the lease. Bank of America provided a $50 million construction loan for the building, according to Benzeevi.