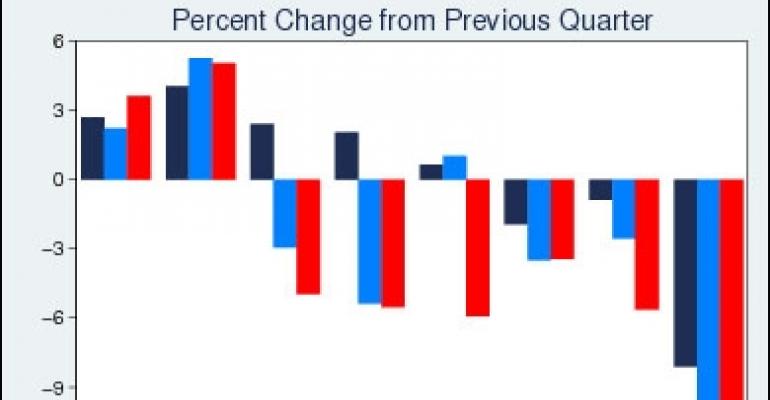 A key tool used to track the health of the economy and the commercial real estate market is being affected by the shrinking number of transactions, according to the Massachusetts Institute of Technology’s Center for Real Estate.

For the first time since MIT developed the Transactions Based Index (TBI) in 2005, there were too few retail transactions in the fourth quarter to update the sector’s index, says David Geltner, director of research at the Center for Real Estate.

“The fourth quarter of 2008 is the first time we’ve ever had to skip updating one of the sector indexes,” Geltner says. “We couldn’t update the retail index because there were literally zero sales of retail properties” in the database.

He’s worried that the drop in transactions will also hamper the production of new reports. “I think this first quarter of 2009 is going to be our leanest, scarcest quarter ever,” he says. A setback in compiling the report could have far-reaching effects, since many real estate professionals have come to rely on the indexes. “The market may be in bad shape and getting worse, but we’ve got better tools for tracking it now than we’ve ever had before,” Geltner says.

The TBI tracks quarterly sales prices of big, investment-grade properties like shopping malls, office high-rises and apartment complexes bought or sold by institutions such as pension funds. The data comes from the National Council of Real Estate Investment Fiduciaries (NCREIF), an association of institutional professionals, which sponsors the transaction-oriented index.

The TBI is based on actual transaction prices of properties sold in NCREIF’s limited universe of several thousand properties, which must meet certain criteria, including that they are currently operating.

NCREIF produces a well-known index that is based on appraisals, rather than on the prices of sold properties. The fiduciaries’ index measures the long-term investment performance of real estate in which the group’s members have invested, Geltner says.

“But the TBI is going to pick up more quickly and more precisely the actual movements in the marketplaces,” he says. Because the TBI is based on actual sales prices, it is tracking the nation’s downturn more effectively than the appraisal-based NCREIF, says Geltner, who is also a professor of real estate finance at MIT.

In February, the index showed that sale prices of commercial property sold by major institutional investors fell by 10.6% in the fourth quarter, the largest quarterly decline in more than 20 years. Statisticians were able to determine that institutional prices for deals closed in the fourth quarter were 22% below their peak values reached in the second quarter of 2007, an indication that the current downturn may be at least as severe as that of the early 1990s.

The TBI’s dependence on transaction prices is a drawback, Geltner says. “If transactions really dry up, like they’re starting to do, then we have an ever-shrinking sample of transactions to base the index on.”

Geltner played a key role in developing the transaction-oriented index. “We developed the methodology here. We produce it and publish it here at the MIT center.” It’s also available on the Center’s Web site. It was designed for research purposes, to support both academic and industry inquiries, and it is available without charge, Geltner says.

The MIT center also played a major role in developing the Moody’s/REAL index, in 2006. Information for that index is provided by the New York-based research firm Real Capital Analytics, whose database of commercial property transactions is much broader than NCREIF’s. The Moody’s/REAL index tracks repeat sales of the same property, to show how prices of consummated deals have changed over time.

With regard to the transaction index, MIT plans to hang in there and keep churning out the quarterly charts, despite the slowing number of deals, says Geltner. “We’ll publish it as long as we’ve got data.