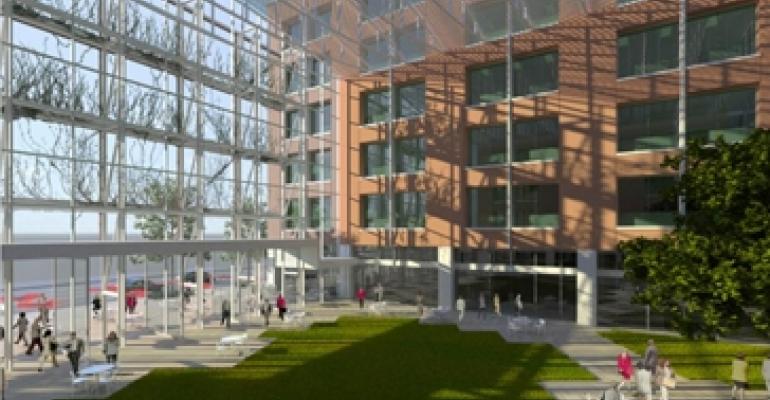 Companies from around the world are expected to snap up research and office space to develop new products and hunt for medical breakthroughs at the University of Miami’s new life sciences technology park.

Project developer Wexford Miami LLC’s approach to filling the facility serves as a case study in showing how state-of-the-art technology and a savvy marketing plan can attract tenants to a business and research park during the early phase of development.

The University of Miami Life Science & Technology Park will include five buildings providing up to 2 million sq. ft. of office and lab space. The first building, with 252,000 sq. ft., was topped off in mid-September, and the interior work is underway. The design calls for wet and dry labs, and ready-to-lease lab suites. The projected completion date is mid-2011.

Research conducted at the new park could benefit patients with bone tumors or spinal injures, as well as athletes suffering from a variety of sports injuries. The university’s tissue bank, working with the stem cell institute, will have space to pursue advances in regenerative technology.

“When it comes to the University of Miami’s presence in general, the goal is to have that act as a magnet for other companies and research teams that are looking to collaborate with the university faculty and feed off the resources that a major research institution brings to the table,” says Aaron Gordon, vice president at Schwartz Media Strategies, a spokesman for the project. “If you’re an entrepreneurial research team and you want to get noticed or discovered, you really enhance your chances by having some kind of affiliation with a university.”

“A company from, say, Brazil, could come and set up shop here and basically bring a laptop and whatever they need to do their work, and they can get going. They don’t have to build out a lab. Building out lab space is very expensive,” explains Gordon.

Pharmaceutical research teams may test new drugs or products, or experiment with medical compounds at the tech park. “It runs the gamut,” says Gordon. “Companies may be looking to create and commercialize new products for blood tests — anything that you can imagine that falls within the life sciences or biotechnology sector.”

The first building is 40% preleased. Construction will begin on the second structure when the first is 75% or 80% leased. The University of Miami has rented 80,000 sq. ft., and a new tenant for 15,000 sq. ft. in the first structure will be announced this week, says Gordon. Major pharmaceutical companies the size of Merck or Pfizer will likely wait until after the first building is built before leasing space, he adds.

The technology park is predominantly funded with private capital, and is being developed by Wexford in partnership with the University of Miami.

Because of its hurricane-prone, Miami location, the technology center will be bolstered with a hurricane-resistant design, along with emergency power to keep critical functions running in case of a power outage. Other features include:

• Elevators also will be capable of handling greater weight to enable the transport of lab equipment and other large objects.

• Electrical capacity per tenant is greater than in a typical office building to accommodate high-powered lab equipment.

• The air-conditioning system is designed to offset heat generated by the lab equipment.

Phase two of the development will feature a “Rain Garden” where tenants can interact indoors and outdoors.

Gateway to the Southeast

The developer envisions the park as a gateway to the U.S., and particularly, the Southeast. Wexford Science & Technology LLC, the Maryland-based parent company of Wexford Miami LLC, partnered with universities in Baltimore, Philadelphia, Chicago and other cities in developing similar research parks. Miami’s development will be located in the city’s health district, where the University of Miami Miller School of Medicine and six hospitals are located.

Proximity to the university and the health district will “open the door to new opportunities in the Southeast U.S. and the Americas,” said Joseph Reagan Jr. of Wexford Miami, in a statement. The research facilities are expected to draw particular interest from Latin America. Non-English speaking researchers will be paired with faculty or lab professionals who speak their language and are familiar with their culture, adds Gordon.

“The first building is going to mostly be comprised of ready-lab suites, for these companies that come in. They don’t necessarily have the infrastructure or the resources that some of the global companies have. They might be coming here from Latin America, and they want to break into the U.S. market. This is kind of their soft landing pad.”