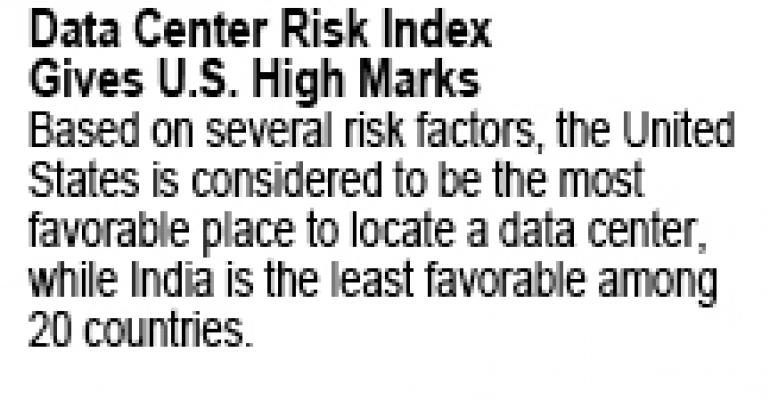 Data centers support business-critical information technology systems, and any downtime can cost millions in lost revenue and even threaten the viability of a business.

Against that backdrop, the United States ranks as the top choice for companies seeking low-risk data center locations, reflecting the country’s relatively low cost of energy and favorable business environment, according to a new study.

The index, which evaluated risk in 20 leading and emerging markets and across key regional centers, scored India the least favorable with China also near the bottom of the rankings (see table).

“Despite their status as engines of global growth, China and India score poorly as a result of strict foreign ownership regulations and other barriers to investment,” says Stephen Whatling, global services director at London-based hurleypalmerflatt.

The risk categories factored into the index include energy cost per kilowatt hour, international bandwidth, ease of doing business, corporation tax, labor, political stability, sustainability, natural disasters such as the earthquake in Japan, GDP per capita, inflation and water availability.

The study’s authors argue that companies should be evaluating their risk across a greater number of criteria and locations, and mitigating or managing certain risks before investing in data centers.

Market strengths, weaknesses
One key emerging market, Brazil, is enjoying substantial growth and attention from foreign investors. Brazil ranks No. 12 on the index. “With improvements in international bandwidth and infrastructure and tax reforms for non-domiciled companies, Brazil could emerge as a Latin American technology powerhouse,” says Whatling of hurleypalmerflatt.

Sweden, Qatar and South Africa are untapped markets and attractive locations, although they require further investment in infrastructure, emphasizes Keith Inglis, a partner at Cushman & Wakefield who is based in the United Kingdom.

Inglis is sounding the alarm on unfavorable trends developing in the United Kingdom that threaten the growth of data centers. “High corporation tax, energy and labor costs in the United Kingdom mean there is a risk that owners and operators could begin to look overseas to reduce overhead.”