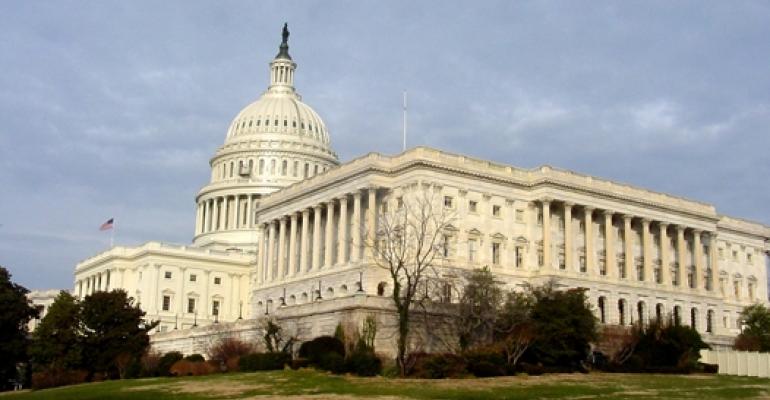 The Washington, D.C. office market experienced a “phenomenal” year in 2010, in the words of Ernest Jarvis, senior vice president of First Potomac Realty Trust. Total office space absorption in 2010 within the city limits was a record-breaking 4.3 million sq. ft.

CB Richard Ellis (CBRE) reports that 78% of the growth in 2010 came from the government sector, which occupies 40% of the city’s office space. While that may be difficult to repeat, experts believe real estate fundamentals are in place to keep the local office market healthy for the remainder of 2011.

Washington, D.C.’s office market has long been the beneficiary of the presence of the federal government, which not only leases space for its agencies but also drives private sector tenants such as lobbyists, associations and attorneys to take space near the seat of power. Office space in all classes within the city limits totals 123.5 million sq. ft.

Washington, D.C. is considered one of the strongest employment centers in the country, according to CBRE, with office-using employment growing by 6,000 jobs between February 2010 and February 2011, compared with an increase of just 1,600 jobs during the previous 12 months.

Certainly foreign investors have faith in the city. An annual survey of foreign investors conducted by AFIRE (Association of Foreign Investors in Real Estate) in the fourth quarter of 2010 named Washington, D.C. the second most attractive location globally for real estate investors.

“2010 was a turnaround year for the D.C. office market, with improvements in private sector leasing and a lot of sales, too,” says John Germano, executive managing director of CB Richard Ellis (CBRE), who oversees the Washington-Baltimore region.

“At the same time you have a lot of capital coming into the city, especially from foreign investors, because of the low-risk environment,” explains Germano.

The projected federal budget deficit of $1.4 trillion for fiscal 2011 may cause some slowdown in leasing activity during the rest of 2011 as prospective tenants consider how budget negotiations will impact individual federal agencies.

Germano says some private sector tenants are taking a “wait-and-see” approach to determine the impact of potential spending cuts.

Local experts say the office market is still healthy, despite an uptick in the vacancy rate from 9.7% in the fourth quarter of 2010 to 10.1% in the first quarter of 2011. Gains in Class-A and trophy markets in the District in the first three months of 2011 were offset by tenants leaving Class-B office space.

Despite the increase in vacancy rates, Germano sees plenty of positives in the local office market. “We are having more discussions with prospective tenants who want to get in the market ahead of the recovery because of their optimism about the economy and anticipation of future price increases.”

Thomas Fulcher, executive vice president and Washington, D.C. branch manager for tenant representation firm Studley, says that he is not seeing a lot of activity on the tenant side. “Law firms are the biggest driver of the Class-A market, so they are watched very carefully,” says Fulcher. “For the most part, none of the big law firms will be making any moves until 2015.”

The overall asking rate for office space dropped slightly, but CBRE says this decrease occurred because of the additional Class-B office space that came on the market as tenants shifted into Class-A space.

Government agencies, which typically occupy Class-B space, own about half of their office buildings and lease the other half. Government programs benefitted the local office market in 2010.

“First, a number of regulatory financial oversight groups were formed, and they were classified as new tenants. Second, government agencies grew almost across the board.”

Bipartisan support is in place to reevaluate the government agency’s use of space. Draft legislation has been written to establish the Civilian Property Realignment Board, which would operate similarly to the Base Realignment and Closure Commission (BRAC) to dispose of unnecessary government property.

A preliminary list of 14,000 surplus properties across the country has been released, but Marcin says many of these properties are small and relatively few of them are “exciting properties” or larger ones in Washington, D.C.

“It’s hard to say if the impact of potential reduced government spending is positive or negative,” says Marcin. “The leasing market may suffer, but if the government utilizes properties like the Old Post Office building on Pennsylvania Avenue, there could be opportunities for investors.”

The Old Post Office Pavilion, an underutilized building in a prime location on Pennsylvania Avenue between the White House and the Capitol building, is ripe for redevelopment.

Fulcher says everyone is playing a wait-and-see game to determine the impact of a drop in government spending. “There will be winners and losers, and it’s possible that some law firms, associations and lobbyists will be busier because everyone will be going after more limited funds,” says Fulcher.

“Last year, the government propped up the local market but now the private sector is stepping in,” he adds.

“There is no real panic over the prospect of the government downsizing because most companies are properly leveraged,” says Marcin. “Owners are well-versed in pursuing a diverse tenant base.”

Government leasing has influenced development in underutilized areas of the city, including neighborhoods such as NoMa (North of Massachusetts Avenue) in Northwest Washington, the Capitol Riverfront area and Southwest D.C.

“Under Robert Peck’s leadership, the government has functioned like an economic development agency and has led the way for private sector development in some parts of the city,” says Jarvis. Peck is the commissioner of public buildings for the General Services Administration.

Government agencies have a cap on how much they can spend for office space, so Germano says that “trophy buildings are not an option.” He says landlords know government rent limitations and build spaces that fit an agency’s criteria.

“We saw a strong influx of financial and regulatory workers in 2008, and I think the next wave of demand will come from law firms and associations making a comeback,” says Marcin. “We could see more financial tenants coming in as well.”

Germano of CBRE says prospective tenants are taking advantage of the availability of high-quality office space that opened up as some private sector tenants downsized.

“Good space in good buildings is on fire,” says Germano. “Rates in those spaces are going up and landlords are cutting back on concessions. Over the next twelve months, options in quality buildings will diminish.”

Jarvis of First Potomac Realty Trust says that a constrained supply environment for Class-A buildings because of a lack of new construction the past few years will continue into 2013.

The negative side of the flight to quality is that rates for spaces in A- or B buildings will deteriorate as tenants leave, says Germano. While law firms represent the biggest segment of Class-A tenants in the city, some are operating on a tighter budget than in the past.

“Law firms still want to be in Class-A trophy buildings, but they are becoming more efficient in the way they use their space,” says Jarvis. “Instead of the partners needing an office with 800 or 900 square feet, they are choosing to go with 600 or 700 square feet.”

Fulcher says that some of the larger law firms are opting to leave their big spaces and move into places with plenty of amenities such as 1000 Connecticut Avenue, which has a downtown location next to a Metro station and a glass exterior with city views.

“CityCenterDC will offer a similar level of amenities,” says Fulcher. “The problem for landlords of these spaces is that they are competing with older buildings that naturally have cheaper rents. Tenants, especially if they are looking for 50,000 square feet or less, have plenty of options. One law firm we worked with that wanted 15,000 square feet had twenty different options for space that was already built out.”

Market Square, located at 701 and 801 Pennsylvania Avenue NW, was sold by Beacon Capital Partners to Wells Real Estate Investment Trust II for approximately $615 million in March. CBRE says that the “record-high sale price per square foot of $904 demonstrates investors’ confidence in the market.”

“This demonstrates the continuing attractiveness of Class-A buildings,” says Jarvis. “I think we’ll hit a $1,000 per square foot sale in D.C. before the year is out.”

Michele Lerner is a real estate writer based in Washington, D.C.

Foreign investors and local real estate experts are bullish on the D.C. office market, and another sign of health is the renewal of spec development in the city.

“At a conference a few months ago someone asked if spec development was occurring [anywhere in the U.S.] and the entire audience laughed,” says John Germano, executive managing director of CB Richard Ellis (CBRE), who oversees the Washington, D.C.-Baltimore region.

“When I mentioned that we are seeing spec developments like CityCenterDC in Washington, the consensus was that D.C. doesn’t count. We are an anomaly here unlike any other market because of the federal government.”

One of the projects generating the most excitement is CityCenterDC, a 10-acre, mixed-use development on the site of the former convention center.

Hines/Archstone started construction in April on this pedestrian-friendly neighborhood, which will include six buildings with retail and residential space and 520,000 sq. ft. of office space.

Nearly an acre of open space will be part of the development, which will also include a new street grid. The location, near the Washington Convention Center, museums and tourist attractions, is expected to draw local residents, office workers, tourists and convention visitors to the shops and restaurants.

CityCenterDC, a $700 million project, is the largest downtown development currently under way in any U.S. city. The anticipated completion date for the entire project is the fourth quarter of 2013. Germano anticipates that the CityCenterDC office space will be filled when that phase is ready to deliver.

Another spec development, recently completed by Boston Properties, is 2200 Pennsylvania Avenue, a mixed-use development on the site of the former George Washington University Hospital.

CBRE says the 432,900 sq. ft. building was 79.8% pre-leased at the time of delivery with law firms and technology firms among the tenants.

“The 2200 Penn development has done tremendously well and will build momentum for more development in that part of town,” says Germano. “It links the Central Business District with the West End and Georgetown and has revitalized Washington Circle.”