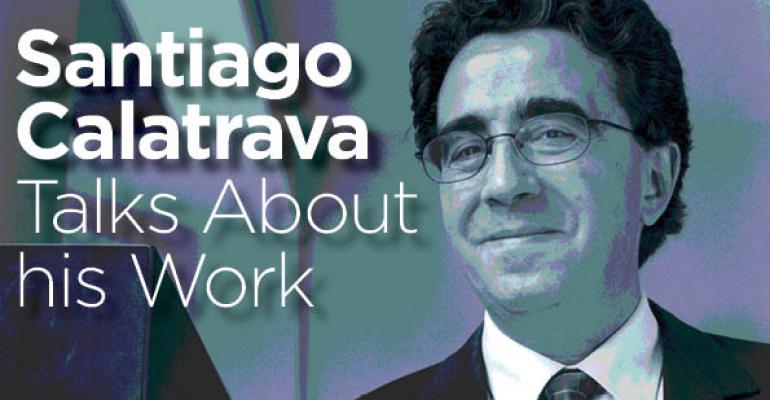 “Build for a Particular Person”: Santiago Calatrava Talks about What Makes Architecture Successful

There are only a handful of architects whose names ring a bell with the general public as well as with real estate developers in the world’s major cities, and any such list would surely include Santiago Calatrava. The Valencia-born, Zurich-based architect, engineer and artist has become famous for his airy, futuristic-looking structures, ranging from pedestrian bridges to museums and cultural institutions to apartment towers. Calatrava has been spending some time in New York City recently, as he continues to work on the St. Nicholas Greek Orthodox Church and the World Trade Center transportation station downtown. Next summer, he’s also scheduled to hold a sculpture exhibition on a stretch of Park Avenue on the Upper East Side, near his Manhattan home.

As we talked about his work, both architectural projects and paintings and sculptures, which Calatrava considers to be inextricably linked, he pointed to a wooden model of one of the sculptures to be displayed at the upcoming exhibition—a structure built on the same idea as the transportation station in Lower Manhattan (a bird taking flight). As high profile as his New York projects are, however, Calatrava’s work file is truly global and currently includes the Doha Bay Crossing in Qatar and the Museum of Tomorrow, a science museum dedicated to sustainability, in Rio de Janeiro. Below, Calatrava talks about his feelings on the design process in American cities, the difference between public and private projects and what he hopes to achieve in his buildings.

NREI: Your work portfolio contains a lot of civic and cultural projects—bridges, transportation stations, museums, and not as many commercial developments. Was this a coincidence or do you prefer to work on public projects?

Santiago Calatrava: When I was starting out, for many years, the main source of work for me was through competitions, particularly in Europe. And they were organized by the state, so my first projects were educational, like libraries, or railroad stations and bridges. It was only later that I started working for private developers, particularly in Sweden, on the Turning Torso building [completed in 2005], the Chicago Spire in Chicago and 80 South Street in New York. Today, only the Turning Torso has been realized. But I like working with private developers—you can be very daring in your work.

NREI: What was your experience like working with commercial developers? Did you find it more challenging than working with governments?

Santiago Calatrava: I like working for private developers very much. The relation to the client is very direct, so things become easier. And it’s interesting to work on [a for-profit project], which we have done recently for Florida Polytechnic’s Innovation, Science & Technology building. It shows that for a private client it can be done.

NREI: Which American cities do you admire the most in terms of architecture?

Santiago Calatrava: Chicago is a city I respect very much—it has great architectural heritage. And with the Chicago Spire, we got unanimous vote of the City Planning Commission. I love that regular citizens can go and have their say.

And at 80 South Street in Lower Manhattan, the skyline of New York is beautiful, but the skyline downtown is particularly so because you have older skyscrapers facing newer ones.

NREI: There is a movement currently in the U.S. for people and businesses to move from the suburbs back to downtowns and Central Business Districts. What do you think of the trend?

Santiago Calatrava: It’s really surprising, this movement, it’s almost generational. The people are coming back into the center of the city because you have all the facilities there—the museums, the parks, all the cultural offerings. And now many cities also have a lot of sports facilities—the bike lanes in Chicago, for example. And it’s good because otherwise everyone goes home to the suburbs after work and the city is deserted. Personally, I like this movement. I myself live here (on Park Avenue in New York) and in Zurich and I enjoy walking to the Metropolitan, or taking the subway downtown or, in Zurich, taking the tram to work.

NREI: Which projects are you most excited to be working on now?

Santiago Calatrava: Our destiny is to get involved in projects that take five, six, seven years to complete. The Doha Bay Crossing in Qatar is the biggest project I’ve ever done, making a bay across the Doha in a circular way and liberating the Corniche [the city’s waterfront promenade]. We are building four major bridges [including pedestrian and vehicle bridges] and 12 kilometers [about 7.5 miles] of tunnels. They are not private, but they help enormously private developers. This is part of my job. In the case of Doha Bay Crossing, we are linking the old city and the new city and the airport. It will take only seven or eight minutes for people to get from the airport to the hotel and so on. [Doha Bay Crossing is part of Qatar’s preparation for the 2022 World Cup].

We are also working on the Museum of Tomorrow in Rio de Janeiro. We proposed to the government to plan the plaza in front of the museum and dismantle an existing elevated highway and plan the road. Now the historical part of Rio is once again linked to the bay. A lot of new housing is being done in the area. When you have a highway 20 feet up in the air, and cars passing a couple of feet from people’s windows, the city becomes very unhospitable. By turning that down, the city became much more livable. We are transforming that neighborhood into one of the more desirable areas of Rio, which is favorable to commercial development.

And at Ground Zero, for example, we are developing the 360,000-sq.-ft. retail complex, which is not a small thing. We are trying to do high-end retail and we are finding the market very positive. Independent of the PATH station, it will be the heart of the whole area in terms of facilities. The amount of people moving through will be close to half a million. A project like that becomes very attractive for people because the architecture is so particular, it will be attracting a lot of tourists, as the memorial is already doing.

NREI: If you could change how commercial projects—office buildings, residential towers, malls—are being designed, which changes would you propose?

Santiago Calatrava: Sometimes you have certain standards of how a mall should be or how an office building should be, but it doesn’t mean the standard doesn’t keep changing. It has to be interesting, it has to deliver a little more. Because otherwise, you open a mall, it works for two years, and then a bigger mall opens nearby, and people go there. And the same thing happens with office buildings. You add value by doing good architecture that doesn’t need to be expensive, as we have done in Florida. And certain brands have discovered the value of design and the value of innovation and [want it in their corporate buildings]. It’s amazing—the iPhone, as simple as it is, also has an aesthetic value. So you cannot continue building the same boxes. You have to innovate. And this we are capable of delivering.

You can do new malls, new office buildings, with an unconventional touch. I am very proud [of] the World Trade Center shopping area and PATH. I think it will give the place a lot of life. Westfield wants to build one of the best shopping areas in the city, and I think it belongs there. It’s not just a mall— you can get a coffee there, you can go to the market, or you can buy some bread on the way home. This is a source of life for those kinds of places. This is also culture; it’s a fundamental part of the whole installation. It’s not going to be just commuters going to the place, but even people living in the neighborhood. I learned that in Switzerland—the train stations become not only centers of transit, but centers for the whole area, people go there to get the newspaper in the morning. If you take the example of Grand Central, it has the Oyster Bar. I know people in their 70s who will take the train from New Haven just to go to the Oyster Bar and for them it’s the [ultimate indulgence]. It is about quality of life.

NREI: How do you feel about how the design for the entire World Trade Center site, including the office towers, has shaped up?

Santiago Calatrava: We are still on the way. Tower 3 will finish and Tower 2 will hopefully soon find the resources to complete. And the Art Center. The whole thing is a big achievement. It’s a very strong statement. I am present there with two buildings, they are not so big, but it’s capital for linking the system. The St. Nicholas Greek Orthodox Church will be the only non-secular building on the site. The whole project is a historical achievement, for the city of New York, for the state of New York. I am working for almost 13 years on this project and the emotion is still there, like from the first day. People are proud to be working there.

NREI: If money was not a constraint, how would you change the way commercial buildings are designed today?

Santiago Calatrava: I have built many bridges, and one of the interesting things for me, because I’ve lived in Paris for so many years, [is that] Paris is a city of bridges. And it’s very beautiful. But our bridges, in the 20th century, they are very often ugly, utilitarian bridges. It wasn’t always like that, if you look at the Golden Gate in San Francisco or the Brooklyn Bridge. And even the smallest bridges—a museum like the Metropolitan has several million visitors a year, but a bridge has 70 or 80 million of visitors a year. If the bridge is beautiful, if [visitors] can enjoy the bridge, it becomes an event. So it’s very important that we re-institute the quality of places. I hope very much that we humanize places. Even with the need for housing, for schools, for malls, [when] we find an opportunity to build for a particular person, for a particular kid that goes to that school, for a particular old lady that lives in that apartment buildings, [then] we discover the possibility of more human architecture. Whoever does that will be very successful, particularly on commercial projects, because people will be ready to spend money on those places.