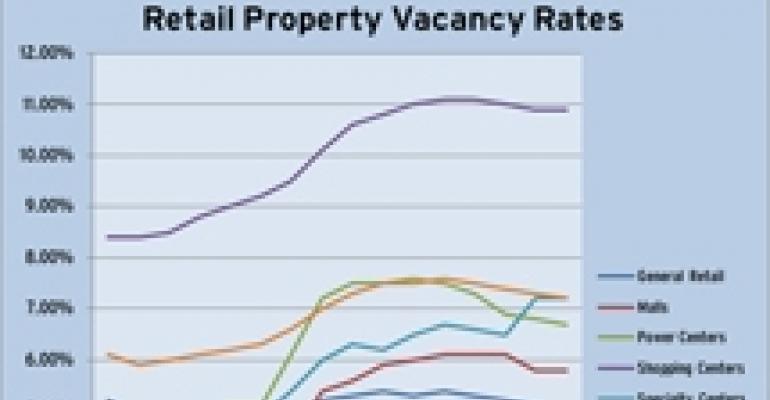 In the CoStar Retail Report for the first quarter 2011, Washington, D.C.-based CoStar Group found that the retail market showed increasing signs of stability. Overall, the firm measured the retail vacancy rate at 7.1 percent—unchanged from the previous quarter and down 20 basis points from 7.3 percent in the second and third quarters of 2010.

“Whether or not the decrease in positive net absorption is a pause before the recovery resumes depends largely on future corporate hiring and investment,” says Chris Macke, senior real estate strategist with CoStar. “Without an accelerated rate of corporate hiring the proposed Federal budget cuts will become a drag on retail real estate as will rising fuel costs. However, an increase in corporate hiring and investment could mitigate the budget cuts shifting employment and spending from the Federal government to the private sector which would be ideal. If corporate hiring accelerates for an extended period of time the eventual wage growth would also make consumers better able to manage increased fuel costs.”

In contrast with figures from Reis Inc., CoStar found that the vacancy rate at the malls in its database had declined to 5.8 percent—a lower rate than most other retail segments CoStar tracks.

CoStar’s data shows a brighter outlook for mall fundamentals that Macke says is due to the limited amount of new mall construction that took place during the last 10 years. The industry also already experienced a period of anchor consolidation, and so was not affected by the high-profile bankruptcies of Circuit City, Linens and Things, Borders and others.

There is also less risk with malls as they are now co-opting large tenants from the non-mall retail centers, Macke says.