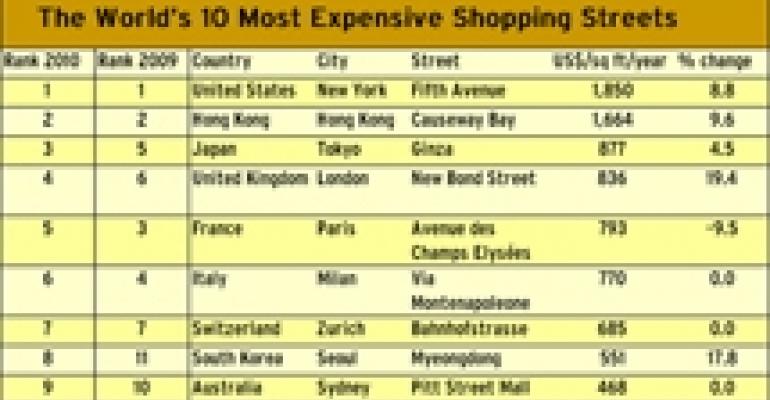 Rents Hold Up On World’s Most Expensive Streets

In the past 12 months, the rents on the most expensive streets in nine of the top 10 countries rose or remained flat. Only one street—the Avenue des Champs Elysees—posted a decrease year-over-year. In fact, rents jumped nearly 20 percent on London’s New Bond Street and South Korea’s Myeongdong.

Latin America and Asia-Pacific are showing the most positive rental growth, according to Cushman & Wakefield. And overall, around two-thirds (66 percent) of the 59 countries surveyed by the real estate adviser for its annual Main Streets Across the World report revealed prime rents either rising or remaining static over the year to June. The findings are in stark contrast to the 2009 edition of the report, which revealed the biggest global fall in rents in the report’s 25-year history. (Overall, Main Streets Across the World tracks rents in the world’s top 269 shopping locations.)

New York’s Fifth Avenue remains the most expensive retail market. Rents rose 8.8 percent over 2009 and stand at an average of $1,850 per square foot. Causeway Bay in Hong Kong, where rents rose 9.6 percent, took second with rents averaging $1,664 per square foot.

The combination of the large jump in rents in London and the fall in Paris meant the two markets swapped places. New Bond Street at $836 per square foot now is fourth and Champs Elysees at $793 per square foot is fifth. Ginza in Tokyo remained in the number three slot as rents rose 4.5 percent and stand at $877 per square foot.

“New Bond Street remains one of the most sought after locations in the world for luxury brands and, due to the significant imbalance between supply and demand, the thoroughfare continues to witness significant rental growth,” Peter Mace, Cushman & Wakefield’s head of central London retail said in a statement. “This trend is likely to continue for the foreseeable future on the basis that there are still a large number of retail requirements that remain unsatisfied."

According to Cushman & Wakefield, Europe as a whole registered a decline in rents of 4.5 percent. Ireland’s Grafton Street in Dublin tumbled from eighth to thirteenth, with rents dropping by 25.8 percent, and Ermou in Athens, Greece, plummeted seven rankings with a 15.4 percent rental decline.

In the Americas, the U.S. accounts for eight of the 10 most expensive shopping streets. Toronto and Sao Paolo boast the other two.

“The aftershocks of the global economic recession are still being felt in the retail property market and the path leading from recession to recovery has been far from smooth. In the more mature markets, occupiers are expected to remain cautious and selective about the space they take,” John Strachan, Cushman & Wakefield’s global head of retail said in a statement. “However, on the great shopping streets of the world, in cities such as London and New York, demand has continued to exceed supply and the appetite of international brands has resulted in rental uplift.”