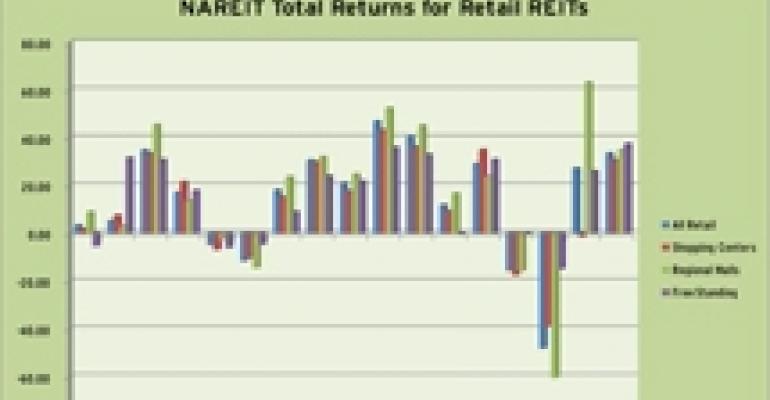 Retail REITs as a group posted total returns of 33.41 percent in 2010, according to NAREIT—the second straight year that the sector delivered strong results.

According to NAREIT, at year-end 2010, the equity market capitalization of the U.S REIT industry had increased to $389 billion, up 44 percent from $271 billion at the end of 2009, but still trailing that of the peak year of 2006, when equity market capitalization reached $438 billion at year-end. The retail sector accounted for $96.2 billion of that total.

All sectors of the U.S. REIT market delivered positive returns in 2010, and all but two sectors produced strong, double-digit returns. Top performing industry segments for the year were apartments, up 47.04 percent; lodging/resorts, up 42.77 percent; and commercial mortgage financing, up 41.99 percent. Industrial REITs were up 18.89 percent and office REITs were up 18.41 percent.

“In a commercial real estate marketplace in which many private owners have continued to find it difficult to raise capital to restructure highly leveraged balance sheets, REITs again demonstrated their cost-effective access to capital through the public markets,” NAREIT President and CEO Steven A. Wechsler said in a statement.

According to NAREIT, REITs have largely used the capital raised to pay down debt and begin to make strategic acquisitions. The industry’s debt ratio as of September 30, 2010, was 41.4 percent, down from 66.3 percent at the end of February 2009.