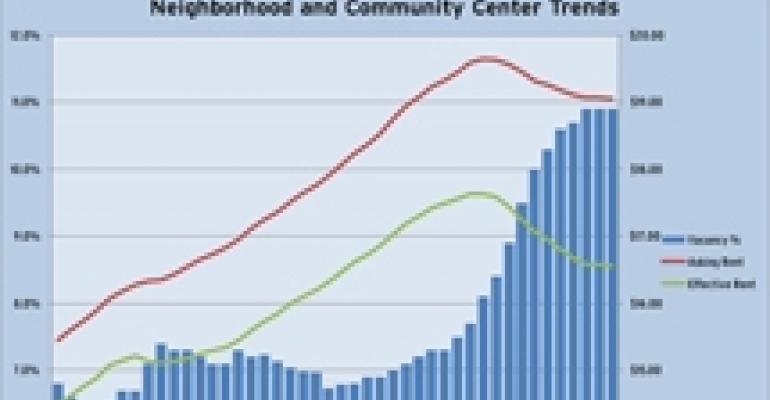 Neighborhood and shopping centers appear to be “meandering around a bit after the temporary reprieve from deterioration in fundamentals for retail properties last quarter,” according to Reis economist Ryan Severino.

Vacancy levels remain at 10.9 percent, just a shade lower than the all-time high of 11 percent hit in 1991. Reis expects that the broader economic challenges mean that the vacancy rate could continue to tick upward in 2011, despite the recent stability. In addition, asking and effective rents declined by 0.1 percent, which Severino described as “a slight resumption of the downward trend in rents that began in mid‐2008 and persisted until last quarter.”

The vacancy rate for neighborhood and community centers remained flat or declined in 45 of the primary 80 metropolitan areas Reis monitors and effective rents remained flat or increased in 35 out of 80 markets.

Although a slight majority of markets Reis covers posted flat or even improving fundamentals last quarter, a minority of markets posted flat or improving effective rents this quarter. “This provides further evidence that retail is not yet on the road to recovery and any apparent optimism from last quarter about a recovery beginning to take hold and spread to a larger number of markets has clearly been squelched,” according to Severino. Looking forward, the market will remain choppy.

While the outlook for neighborhood and community centers remains muddy, the regional mall sector is showing clearer signs of recovery. Vacancies declined by 10 basis points, from 8.8 percent to 8.7 percent during the fourth quarter. This is the second consecutive quarter that vacancy for regional mall figures has declined after rising from the third quarter of 2007 and peaking in the second quarter of 2010 at 9.0 percent.

In addition, asking rents increased for the first time since the third quarter of 2008. According to Severino, “It is not entirely surprising to observe regional malls performing relatively better than neighborhood and community centers as the economy recovers. Regional malls did not experience massive supply increases like neighborhood and community centers during the last decade.”

Still, regional mall asking rents are still at a level last observed in the second quarter of 2006, which is providing an incentive for former tenants of smaller strip malls to consider leasing space in malls. What this means is that, to some extent, the success of regional malls is coming at the expense of neighborhood and shopping centers. This view is bolstered by the fact that the blended vacancy rate for both sectors sits at 10.4 percent and has been flat for three quarters.