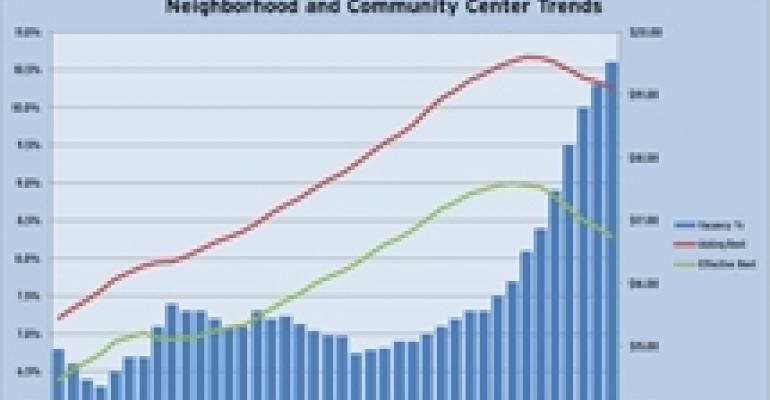 Vacancies Rise, Rents Fall at Malls and Shopping Centers in the Fourth Quarter

The conditions have caused rents to fall to the point where asking and effective rents at neighborhood and community centers are now back to the levels they were in 2006 and 2007. Asking rents at regional malls have also dropped to 2006 levels. According to Reis, “This is also the first time in our 10 year history for regional malls that we’ve observed four straight quarters of asking rent declines, and the year-over-year decline of negative 3.6 percent is the largest magnitude of deterioration over a 12 month period on record as well.” More troubling, this is the first time in the 29 years it has been tracking neighborhood and community center trends that Reis has recorded effective rent drops in all 77 markets it covers.

Reis cautions, however, “[N]ote how completions have also slowed, with 1.8 million square feet of strip mall space coming online this period. Also note how negative net absorption outstripped the amount of newly completed space for every quarter in 2009.”

Going forward, Reis expects economic pressures to continue to affect consumers and businesses. Although the economy is growing again, high unemployment and inconsistent consumer spending patterns make for a difficult outlook for retail properties for another 18 to 24 months.

“Reis continues to project increasing vacancy levels and negative asking and effective rent growth for neighborhood and community centers through 2011. We have yet to observe any unexpected systematic resumption in hiring and strength in consumer spending that may lead us to revise our projections with a more optimistic bent,” the company wrote in its report.