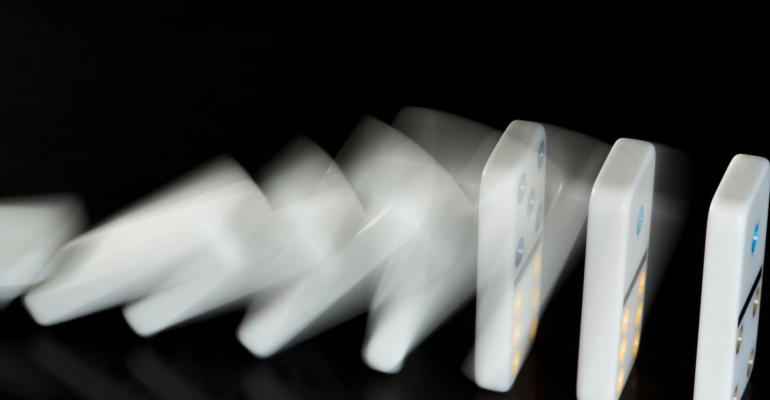 CMBS defaults may spike this year, as the high volume of upcoming loan maturities might leave some borrowers scrambling for funds to refinance their loans, reveal new reports from Fitch Ratings and Trepp LLC.

Defaults on CMBS loans have been on a steady downward slope for the past five years, falling to an annual rate of 0.39 percent in 2015, Fitch researchers note. (CMBS defaults reached a cyclical peak in 2010, at 4.07 percent). The low default rate was aided by both improving property fundamentals and values and healthy CMBS issuance during 2015.

So far this year, however, new issuance has not lived up to expectations. Year-to-date in 2016, U.S. CMBS issuance has totaled $19.0 billion, according to Commercial Mortgage Alert, an industry newsletter. That’s almost a 30 percent decrease from the issuance volume that was recorded during the same period in 2015. This is happening as approximately $211 billion in loans are scheduled to come due between now and year-end 2017, according to research firm Trepp LLC.

The Fitch Ratings team “expects term defaults to tick up slightly in 2016 as the current credit cycle matures. Maturity defaults may also see an increase in the next few years as peak vintage loans, many of which are over-levered, mature. The cumulative default rate, currently at 13 percent, is predicted to increase slightly in 2016 as defaults begin to increase and issuance declines somewhat.”

Between lower overall issuance, the adoption of regulatory changes by banks, the high probability of a second interest rate increase in 2016 and property fundamentals being negatively affected by low oil prices in certain markets, “the outlook becomes slightly dubious for the more-than-$200 billion in non-defeased, non-delinquent loans coming due between now and the end of 2017,” Trepp researchers write. Trepp ran an analysis of the loans scheduled to come due against cap rates, loan-to-value (LTV) ratios, debt service coverage ratios (DSCR) and debt yields featured in the conduit originations issued during the six months leading up to March 2016. The firm found that 85 percent of the loans (by balance) met the required DSCR threshold under current market conditions, but only 43 percent met the new LTV thresholds to secure refinancing, based on today’s NOI and cap rate levels, and only 52 percent met the debt yield threshold.

“This is not to say that all these loans outside of the recent CMBS origination parameters will default,” Trepp researchers write. “There are many on the margin that will either need non-CMBS lenders to provide higher leverage or sponsors willing to invest more equity. Bridge, mezz and non-band lenders are in a position to issue some serious volume in the next two years working on loans in that marginal area between totally refinance-able and those in need of some wiggle room. CRE prices have just plateaued and if they do begin to decline, the CMBS market will see maturity defaults rise and more loans go from CMBS to the bridge, mezz and non-bank lending space.”

In fact, Kroll Bond Rating Agency reports that the larger banks have been so eager to take advantage of the opportunity to refinance maturing CMBS loans that they may already be reaching their allocations for the year. Life insurance companies might also increase their allocations to commercial real estate lending for 2016, but there is lingering concern in the market that even with the alternative financing sources stepping in to fill the gap in CMBS lending there may be somewhat of a liquidity crunch at the end of the year.