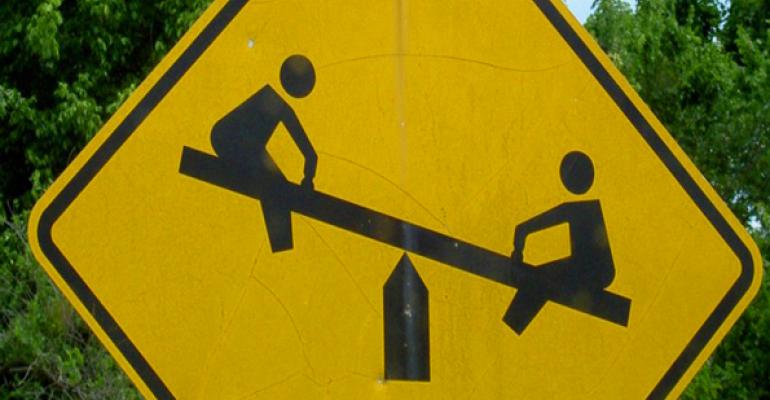 As the recovery continues for commercial real estate, conduit lenders are opening the taps—tempting borrowers with risky levels of leverage, according to Moody’s Investors Service.

“As the lending market continues to ramp up, competition among issuers will lead to a further decline in credit underwriting standards,” according to Moody’s “US CMBS 2013 Outlook: Credit Quality of New Loans to Slip But Not to Peak Levels.”

You might not feel like you’re getting high-leverage loan offers from conduit lenders, but Moody’s loan-to-value measure considers cap rates through market cycles, taking into account the recent run-up in commercial property values.

Moody’s loan-to-value rose to 101 percent from 95 percent during 2012. That’s fairly high, though still much less than 2007 when commercial real estate peaked and Moody’s LTV measure topped out at an average 117 percent.

The traditional LTV calculation used by underwriters—the size of the loan versus the value of the property—shows a much lower average LTV of just roughly 64 percent in the deals now tracked by Moody’s. That’s about where the average loan-to-value percentage has been for the last two years. Even back at the peak of the boom, that traditional LTV only rose to 73 percent.

“Our approach was effective in picking up signs of growing credit risk in CMBS 1.0 and is again signaling growing risk in CMBS 2.0,” Moody’s reports.

Also, Moody’s notes a few positive underwriting trends: Lenders are also demanding that properties show more income to support loan payments. They are also making loans that are amortized over shorter periods, which reduces the size of the balloon payment that come due when a loan hits the end of its term.

Generally, the credit quality, and therefore the ratings, of outstanding CMBS transactions should be stable in 2013—Moody’s expects to affirm 80 percent of the ratings that it looks into in 2013, with the other 20 percent of ratings actions split between upgrades and downgrades. That hardly represents a collapse in credit quality.

Fundamentals for commercial real estate continue to recover unevenly. Two major real estate sectors are still bruised from the recession. Office and retail properties, which account for 60 percent of recently issued CMBS, will not recover until after 2013, according to Moody’s. "Office and retail have an ample supply of excess inventory that the market must absorb before rents can rise," says Philipp. "Multifamily and hotel, two other important sectors, are further along in their recovery, and net operating income for both will grow."

Meanwhile, the hangover from the last real estate boom continues to fade. "The proportion of delinquent and specially serviced CMBS loans will decline in 2013 but remain within a few percentage points of current levels," says Banhazl. Currently, 9.38 percent of the loans tracked by Moody’s are 60 days delinquency or more; 11.51 percent of loans are in special servicing.