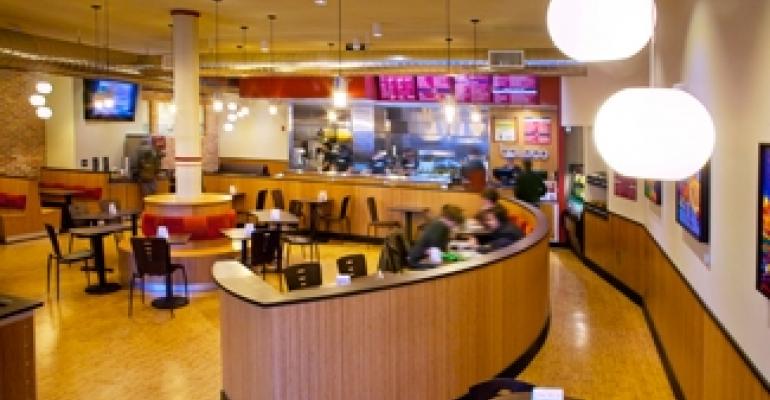 When it comes to creating long-term growth plans for a restaurant chain, sometimes the wisest course is to concentrate on the short term, according to John Pepper, CEO of Boloco, an up-and-coming fast casual concept based out of Boston.

Boloco started as a school project Pepper and a few friends undertook in the course of earning their MBAs and has grown into a regional player in New England. Since its first location opened in 1997, it has maintained steady momentum—the company has 16 restaurants operating already, a 17th under construction and up to four openings in the works for next year.

But given the uncertainties of the retail sector and the current economic climate, Pepper prefers not to take future growth for granted.

“Our goal would be getting to about 50 restaurants by 2014,” he says. “But I’ve learned that saying these things is sometimes misleading.”

Boloco’s management focus at the moment is “how to build a business that’s relevant 50 years from now,” Pepper adds.

Though Pepper protests against the adjective “unusual,” Boloco’s concept is based on taking a very traditional food—the Mexican burrito—and giving it a twist with fillings that draw on favorites from other cuisines. For example, the chain’s most popular sellers include the Buffalo chicken burrito, the Memphis BBQ burrito and the Bangkok Thai burrito. Boloco also sells salads, wraps, shakes and smoothies. It’s one of those places loved by busy office workers who want to be able to get an affordable, healthy lunch and get in and out of the restaurant in minutes, according to Pepper.

As a result, downtown financial districts are among the places Boloco scours for potential new sites. In those locations, the chain prefers to limit its operations to peak times—from 7:00 in the morning until about 4:00 in the afternoon, when the lunch time crowds abate. In other environments, however, Boloco works until 10:00 at night. In addition to the CBDs, it likes locations on college campuses, near hospitals, in airports and in suburban areas with demographics that fit in squarely in the middle-income bracket.

Co-tenancies with Starbucks and Panera Bread work out particularly well because those chains seek out the same customers as Boloco, notes Sara Taylor, of Waltham, Mass.-based Eagle Rock Retail LLC, the chain’s real estate agent. Being located in the same centers as Whole Foods and Target also creates good synergies.

“We feel like our perfect zone is a place where there is a decent size working population,” Pepper says. “And families and kids in reasonably well-to-do, but not very wealthy areas, have an appreciation for what we do.”

Boloco’s restaurants range from 1,600 square feet to 2,300 square feet and it prefers end caps, according to Taylor. One of the things that set the chain apart is its insistence on sustainable development—Boloco is certified by the Green Restaurant Association. It uses environmentally sustainable materials, most notably bamboo, in construction. Most of its disposable ware is compostable. Its décor also tends to be upscale—many units feature large screen TVs, free Wi-Fi and works by local artists. In addition, Pepper is adamant about providing fair pay and benefits for Boloco employees.

“I just don’t understand how you can build a good business without taking care of your people,” he notes. Many fast food chains tout the fact that they recognize good performance, he points out. But “recognition is great, as long as you are able to survive.”

As a result of all these factors, opening new locations tends to be expensive. To help out with the expense, Boloco looks for its landlords to pay to get new sites into “restaurant condition,” in addition to providing tenant improvement (TI) dollars. The chain is well-known in the region, so landlords in the more suburban locations tend to take these requirements in stride, Taylor notes. In Boston proper, however, the restaurant sector has held up remarkably well through the downturn, so there is less room to do opportunistic deals.

So far, the company’s model has been to sign 10-year leases, with two five-year options. But as it looks for more drive-through locations in suburban areas, it will consider doing ground leases, Taylor adds.

Today, Boloco’s nexis is in Boston, where it operates 13 of its restaurants. It also has a few outposts in nearby New Hampshire and Vermont. But in 2012, Pepper would like to break into a new market in Eastern U.S., ending the year at approximately 30 locations overall. To that end, Boloco recently secured $5.5 million in equity capital from Chicago-based investment firm Winona Capital Management. But even though Winona has worked with Boloco before—that $5.5 million was part of a larger package of approximately $15.5 million, $10 million of which was secured three years ago, getting that money was no easy task.

“It was challenging to come to an agreement on the value of the business,” Pepper says. “In this climate, everybody is scared to make big investments. Even though we worked with Winona for three years, they had to question harder what the company’s prospects are and how do you value those? It was a long process.”

What ultimately convinced Winona to put more money into the chain was the fact that even in the midst of the worst recession in years Boloco’s restaurants have been posting positive same-store sales growth, notes Laird Koldyke, managing director with Winona. Some of the more recently opened units have been bringing in more than $1 million in annual sales. Plus, Boloco’s multiple flavor options have allowed it to grow its customer base beyond traditional burrito lovers.

“The company has excellent unit level economics and cash on cash returns, and it has demonstrated its ability to operate in three states. It clearly has legs within greater New England,” says Koldyke. “So our level of enthusiasm for the business and opening new stores has been strengthened even though the recession has been difficult for all restaurant companies.”

Pepper expects that at Boloco’s current expansion pace, by 2011 the company will need more capital commitments. To that end, he’s been looking for an operating company to partner with.