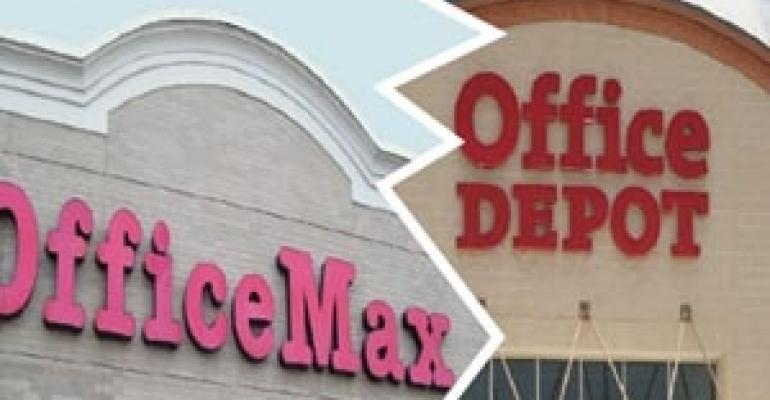 The freshly announced merger between Office Depot and OfficeMax might help save the struggling office supplies retailers from extinction, but it will also lead to some headaches for landlords, market observers speculate.

In a published release about the deal, Office Depot’s management estimates that the merger will result in anywhere from $400 million to $600 million in annual cost synergies by the third year following the transaction’s close. A significant portion of those synergies will likely come from store closings in areas where the two chains compete with each other, as well as less productive stores that are nearing the ends of their lease terms, according to Liang Feng, an analyst who covers the office supplies sector for Chicago-based research firm Morningstar.

Feng estimates that the combined entity will close at least 100 or 200 stores over the next few years, and possibly more.

“The existing office supplies superstores are just too large,” Feng says. “So regardless of whether the merger goes through, they will shift to a smaller storefront.”

In recent months, both OfficeMax and Office Depot have launched small store concepts, ranging from 5,000 sq. ft. to 15,000 sq. ft.

On the positive side, both chains have already done a significant amount of portfolio pruning post-recession, according to Mark Keschl, national director of the retail services group at Colliers International. Keschl also served as senior vice president of real estate for OfficeMax between 1993 and 1998. He expects that most of the projected store closings will involve locations where Office Depot and OfficeMax might cannibalize sales from each other.

“It’s not like they haven’t been paying attention [to portfolio rightsizing], so you’ve got to operate under the assumption that there aren’t too many unprofitable stores,” Keschl says.

At the end of December, Office Depot operated 1,112 stores in North America. It closed net 19 stores and relocated another 28 during the year prior.

Both Keschl and Feng also expect that any further portfolio downsizing will be done strategically, with the retailer waiting for lease expirations rather than dumping hundreds of stores on the market at once. Keschl notes that many OfficeMax and Office Depot stores opened during the expansion wave of the late 1990s/mid-2000s have now moved into the lease extension options period, meaning they likely have less than five years before the end of their terms.

“It makes it much easier to deal with things like inventory and human resources,” Keschl says about shuttering stores as expirations come up.

In fact, shopping center REIT DDR Corp., which owns a combined 65 Office Depot and OfficeMax stores in its portfolio, issued a statement describing the merger as an exciting “opportunity.”

But given that most big-box retailers have been in a downsizing mode recently, finding alternate tenants to occupy vacant OfficeMax and Office Depot locations might prove problematic, according to Lew Kornberg, managing director in the corporate retail solutions group of real estate services firm Jones Lang LaSalle. For one thing, Kornberg expects that over the long term, the combined entity might close up to 1,000 stores, replacing them with smaller locations. In addition, most of the existing stores are in the 20,000-sq.-ft. to 25,000-sq.-ft. range and their spaces tend to be very deep, making them less appealing to other end-users.

“The older, larger prototypes are as much as 100 feet deep,” Kornberg notes. “That’s a difficult size box to demise without creating a bowling alley. So I think the landlords will be challenged in many instances to find ready tenants to step in and take these spaces as they are currently configured.”