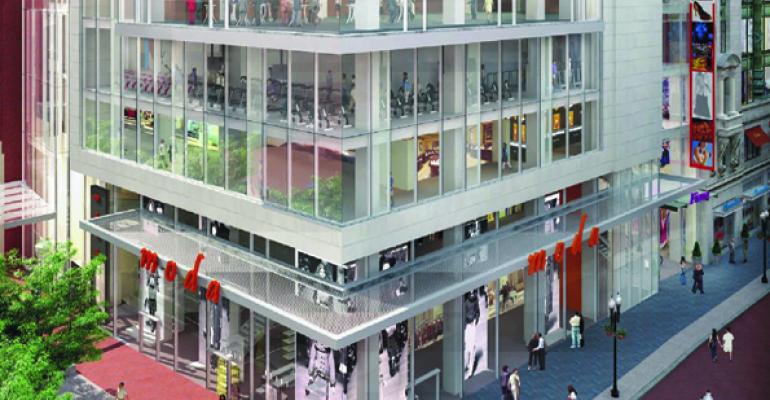 Handel Architects created the designs for the new Millennium Tower and Burnham Building.

Originally, Vornado Realty Trust was set to build the project, but following some very public disagreements between the REIT, the BRA and Boston Mayor Thomas M. Menino, Millennium stepped in as the lead development partner for the site in February of this year. Vornado has retained a 50 percent ownership stake in Downtown Crossing, but will remain a silent partner.

According to a press release from the BRA, the developers will restore the historic Burnham Building by repairing its façade, updating all building systems and adding office and retail space at street level. The new Millennium Tower will be shaped like a tapered “wedge” and increase daylight access on Washington Street. When the project is completed, residents of the Millennium Tower will be able to enter their building on the Franklin Street side, while office workers will enter from the Summer Street.

“I am proud of the decisive progress being made by Millennium Partners just eight months after announcing their lead on the Millennium Tower and Burnham Building,” said Mayor Menino in a statement. “This iconic development will invigorate the heart of our city with new residents, business owners and private investment, solidifying the promise of Downtown Crossing.”

The BRA estimates that the project will create 600 construction jobs and 2,300 permanent jobs and will bring in $5.5 million in annual real estate taxes.