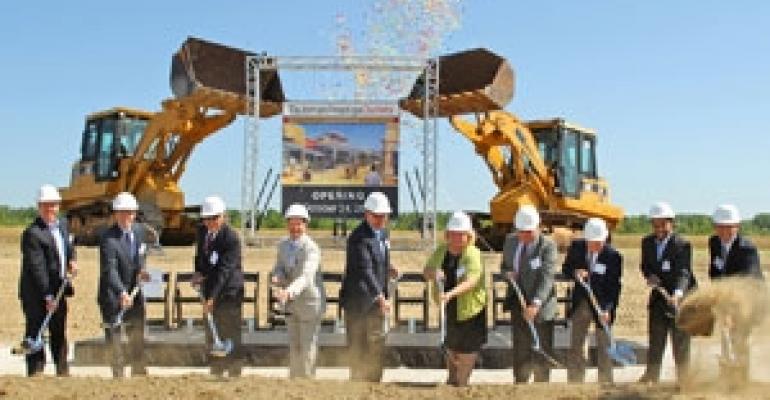 Cost-conscious shoppers are fueling demand for new outlet shopping centers in countries ranging from Canada and the U.S. to Russia and South Korea.

“Because of the economic downturn, shoppers are looking for value and outlet centers have always had that perceived value,” says Craig Delasin, chief operating officer and principal at Chicago-based Urban Retail Properties LLC. “That is why that segment of the market has continued to thrive.”

Urban Retail Properties is currently moving forward with plans to develop three outlet center projects in the United States. The company has also collaborated on two new developments in China and is continuing to pursue additional projects in that country.

Outlet centers are proving that they can deliver both shoppers and tenants. That demand is sparking new development in the U.S., as well as internationally. Globally, the current inventory of outlet centers spans more than 355 centers in 37 countries, totaling 109.4 million sq. ft. In addition, 83 outlet centers totaling 30.6 million sq. ft. were expected to be built by the end of 2013, according to data from ICSC.

Outlet centers have been around for nearly 25 years. However, the centers, often tenanted by major retail brands such as Levis and Adidas, have typically located near resort destinations, or on the fringes of major metros―away from competing full-price stores in traditional shopping centers. These days, outlet centers are finding a foothold much closer to urban markets and are also playing a key role in large mixed-use developments.

For example, Urban Retail has announced a joint venture to build, lease and manage Spring Creek Outlets of Chicago in New Lenox, Ill. The $225 million outlet center will anchor a 1-million-sq.-ft. mixed-use development. The first phase of the center is expected to total 350,000 sq. ft., with a total build-out of 550,000 sq. ft. including second phase construction and out-parcel development. The project will also include restaurants, entertainment venues, hotels and a senior assisted living facility. Urban Retail hopes to break ground in the spring of 2013.

The U.S. represents by far the largest outlet center market with some 179 centers and counting. But with limited opportunities in the U.S., outlet center developers are accelerating growth plans abroad.

For example, Simon and its Japanese partner, the Mitsubishi Estate Co. Ltd., broke ground earlier this spring on Shisui Premium Outlets. The 234,000-sq.-ft. phase one is scheduled to open in spring 2013 with 100 stores, including both international and Japanese brands, as well as restaurants. The project marks the ninth Premium Outlet center in Japan.

For its part, Urban Retail Properties provided pre-development services, as well as ongoing leasing and management services, for the new Shanghai Fashion Center in Shanghai. The project is a redevelopment of a 1929 textile factory on the banks of the Huang Pu River. The outlet center comprises about one-third of a larger 600,000-sq.-ft. mixed-use development that also includes a convention center, designer offices, an entertainment complex and a hotel.

“What (the city of Shanghai) wanted to do was bring that fashion element to more people, particularly the middle class of Shanghai,” says Delasin. One goal of the Shanghai government was to create a fashion-oriented destination. The outlet center offers fashion, but at a lower, more affordable price to local shoppers and tourists. And since the outlet center opened in June, the convention center has hosted about 30 fashion shows.

Outlet centers are attracting a wide variety of international tenants, ranging from sports and casual brands such as Nike, Lacoste and Gap to luxury retailers including names such as Armani, Burberry, Coach and Prada.

“Retailers have figured out a more streamlined way of operating in these outlets, which includes manufacturing goods specifically for the outlet,” says Delasin. “So, from an operational perspective, those stores have performed very well for retailers.”

The lower real estate costs associated with operating outlet center stores is certainly a big part of that appeal. Outlet center locations can cost one-third or even half the cost of a store in an enclosed mall due to lower rents and common area maintenance charges, notes John Schupp, senior vice president, development/project management, at Jones Lang LaSalle, an Atlanta-based commercial real estate services firm.

Outlet centers are also a welcome alternative to full-price stores in a climate riddled with economic uncertainty. The projects are providing retailers with opportunities to expand in both mature markets and emerging markets that are home to a growing middle class.

“We’re still in an era where discretionary income has declined and people are watching what they are spending their money on, and outlet centers are perceived to be a place for discounts,” says Schupp.