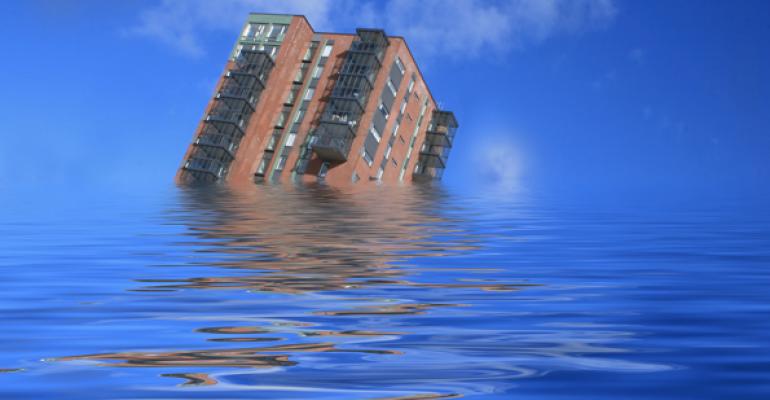 Bargain hunters hoping to pick up deals among distressed assets may need to move quickly. More than half the distressed assets on banks’ books have been dealt with and the amount of loans falling into distressed situations has reached a cyclical low.

“At this point, it’s fair to say that we are moving into the later innings of the distressed cycle,” says Dan Fasulo, managing director at New York-based Real Capital Analytics.

Of the $394 billion of mortgages that became troubled since the 2007 market peak, 58 percent has now been resolved and $165 billion remains to be worked out, according to RCA. In addition, new instances of distress fell substantially in fourth quarter to $4 billion, which is the lowest level this cycle.

The volume of maturing loans will be $119.5 billion in 2013, eight percent of the outstanding balance, of commercial and multifamily mortgages held by non-bank lenders and investors. That’s a 21 percent decline from the $150.6 billion that matured in 2012, according to MBA’s 2012 Commercial Real Estate/Multifamily Survey of Loan Maturity Volumes. Maturities will remain at a similar level in 2014 before peaking in 2015, 2016 and 2017 based on the burst of lending activity done in 2005, 2006 and 2007

However, rising property values mean that loan maturities aren’t going to be as troubling for borrowers as some had anticipated. In fact, current prices on commercial and multifamily properties are, on average, within 20 percent of peak market pricing, according to RCA. That’s not to say it’s easy to refinance loans on properties that were made at the peak of the market at 75 percent to 80 percent loan-to-value ratios. But rising property values are easing pressures on borrowers.

“It still might be a bad situation if you are an owner and your equity is wiped out, but that doesn’t necessarily mean there is going to be a fire sale on the street for all of these assets,” says Fasulo.

All of that means buyers who have been waiting for “the wave” of distressed assets to hit the market are going to be waiting forever, notes Fasulo.

That being said, opportunities to buy distressed assets are not vanishing. Note sales, for example, have been robust. “We would expect that to continue with strong volume for many years,” says Spencer Levy, an executive managing direct at CBRE. In fact, among conduits in particular, there is going to be another bump in 2015 when a lot of the 10-year paper written in 2005 comes due, he adds.

Large banks in particular have worked through much of their REO properties. “My sense from some of the regional banks that we are interacting with is that they are becoming a little more aggressive with their REO assets,” says Patrick Connell, a managing director at CBRE.

Markets with some of the highest levels of distress remaining by total volume, including loans in default or held as REO, include Las Vegas, Manhattan, Phoenix, Chicago and Los Angeles. Office properties have the greatest volume of distressed loans. One-fourth of the current volume of outstanding distress, about $42 billion, involves office properties, according to RCA.

Although pricing rose during the last two years, there is still a lot of opportunity out there, notes Joshua Zegen, managing member and co-founder of Madison Realty Capital in Manhattan. The private equity firm has been a large acquirer of distressed debt in recent years, and the company is continuing to pursue that strategy. Since 2010, Madison Realty Capital has closed on about $300 million of distressed debt transactions, mainly from banks and special servicers.

“The regulatory pressures are creating more momentum for loan sales,” says Zegen. Changes, such as the proposed Basel III, which will require banks to post more equity against sub and non-performing loans, is forcing banks to make strategic decisions to sell versus hold non-performing debt.

In addition, property values have moved off the bottom, which has created more flexibility to sell non-performing loans for those institutions that didn’t want to sell at the low point in the cycle, he adds.

For example, Madison Realty has been very active buying busted condo deals in the New York area. The investment firm has been able to buy the distressed assets and use its real estate expertise to complete the conversions and reposition the properties as rental units. “When the markets rebounded a bit, that was a great strategy, because the banks did not have to take the steep losses that they would have expected to take in 2009 and 2010,” notes Zegen.

Zegen expects buying opportunities for distressed debt to run their course in a few more years. Pricing has already begun to increase. There have been deals that Madison Realty has bought in the past year that have been as low as 50 to 60 cents on the dollar, while the company also has bought some notes at par with no significant discount to face value. While Madison typically buys debt at a significant discount to underlying real estate value, rising prices make it even more important to have the real estate expertise to add incremental value to those investments, notes Zegen.

Rebounding prices in the U.S. have already prompted the big equity investors to shift their attention to Europe where there remains an abundance of distressed asset opportunities. “We are doing quite a bit of work with the foreign banks both overseas and here in the U.S.,” says Levy.

Europe has both inventory and opportunity for buyers that are chasing higher returns. In some circumstances, the market stress in Europe remains much more severe than it is in the U.S. “On a relative basis, I would expect the foreign banks to be much more active selling larger deals in the note arena than the domestics,” adds Levy.