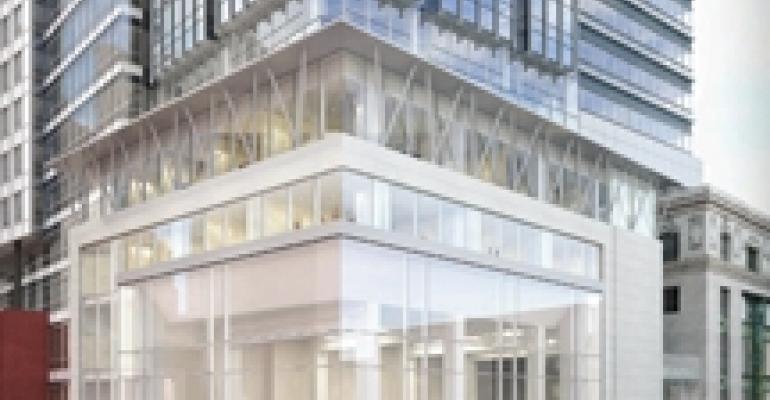 New construction projects ranked high on the list of casualties during the recent downturn. Some developers postponed building new centers because they were fearful that returns on investment would fall short of expectations. Others found they couldn’t get financing, or had the misfortune of seeing previous commitments scrapped because of lender bankruptcies.

Now, with conditions in the commercial real estate sector on the upswing, some of those projects have started to break ground. In one high-profile case, however, a developer may be stalling on a planned project to maximize its returns and using the still challenging financing environment to its advantage.

When Vornado Realty Trust, a New York City-based diversified REIT, stopped work in 2008 on One Franklin Street, its $700 million, 1.2-million-square-foot mixed-use project in downtown Boston, it cited the grim economic outlook and difficulty in securing financing as reasons. Three years later, with no date set for construction to resume, Vornado claims it wants to sell out.

Yet given the economics of the deal, selling the property doesn’t quite make sense. Vornado would have trouble recouping its losses on the land today, but if it builds the project at a later date it will likely reap hefty returns, according to Dan Fasulo, managing director with Real Capital Analytics (RCA), a New York City-based research firm that tracks commercial real estate investment.

“I don’t think they are going to sell it,” says Fasulo. “I think they’ll wind up sitting with this, or maybe they can find a cheaper source of capital to partner up with — maybe an institutional or foreign investor. Basically, what Vornado is saying is they don’t want to build now. They are going to wait until a new development on that site is a home run.”

When Vornado bought the 656,000-square-foot Filene’s Basement building in downtown Boston from Federated Department Stores for $100 million in the summer of 2006, the commercial real estate market was booming.

Vornado formed a 50/50 joint venture with Gale International, a New York-based privately held development and investment firm, and quickly drew up plans to redevelop the property into a 1.2-million-square-foot mixed-use project combining retail, office, luxury condos and a hotel. JP Morgan and Mack-Cali Realty Corp. also invested in the development.

Located in the midst of Boston’s Downtown Crossing shopping district, within easy access to public transportation, the site fit all the requirements for a successful mixed-use development, says Richard K. Green, director of the Lusk Center for Real Estate at the University of Southern California and professor in the School of Policy, Planning and Development at the Marshall School of Business.

Vornado and partners began demolishing existing structures on the site in February 2008. One Franklin Street was due to be completed in 2011. Vornado initially planned to finance construction with a $546 million CMBS loan leveraged at about 70 percent, but could not find lenders willing to commit to such a large sum.

Yet it eventually secured a $360 million deal for a four-year construction loan financed primarily by the Bank of Ireland and Bank of America, with Helaba Bank, HBOS and Capital One taking smaller positions. The loan was scheduled to close on Nov. 15, 2008, but the deal never went through.

After Vornado halted demolition work on the site, media reports said the project’s financing fell through, but stories from Commercial Mortgage Alert, an industry newsletter tracking the CMBS market, show that wasn’t the case.

The banks were still willing to fund the project. Vornado, however, worried there was no longer enough demand from retailers, office tenants and condo buyers to justify building the complex — at least not in the near term.

The hitch was that while Vornado and its partners felt it was prudent to halt construction and wait for market conditions to improve, One Franklin Street was no ordinary project.

One Franklin Street is located within the Downtown Crossing Business Improvement District (BID). In order to build it, Vornado and Gale had to receive permission from the Boston Redevelopment Authority (BRA) and other city agencies.

As long as the Mayor and BRA officials believed the project was halted due to financing issues and low demand, they seemed to be willing to wait for better times for construction to resume. And then Steven Roth, Vornado chairman, committed a costly faux pas.

Speaking before an audience at Columbia University in March 2010, Roth implied that he let the former Alexander’s site in midtown Manhattan sit unused for years in order to get development incentives from the City of New York.

Vornado eventually built the Bloomberg Tower, a 1.3-million-square-foot mixed-use complex, on the land. The site remained empty for nine years after Alexander’s Department Store closed its doors, before Vornado started construction in 2001.

The speech gave rise to suspicion among Boston city officials that Vornado was deliberately stalling on One Franklin Street as well. On March 8, 2010, Mayor Menino sent Roth an angry letter, chastising him for his cavalier attitude toward creating urban blight. He also directed the BRA to look into the possibility of using eminent domain to take back the land from Vornado.

Vornado officials insisted the project was postponed because of the credit crunch and the recession. By November, with no construction date set, the BRA revoked Vornado’s authority to redevelop the site.

Officials with Vornado declined to comment, referring all questions to its annual report. The BRA and Mayor Menino’s office did not return calls for comment.

Vornado claims that it wants to sell One Franklin Tower to another developer or find a new joint venture partner to finance it. In his letter to shareholders this April, Roth indicated that the firm already wrote off $36 million in development costs on the project, with $46 million remaining on its books. Vornado has secured the services of commercial brokerage firm Cushman & Wakefield to help it find a buyer.

In his letter, Roth also pointed out that the firm has received significant interest in the site. Still, the chances of Vornado recouping its $100 million investment under current market conditions are low given scarce demand for undeveloped land, according to Fasulo.

Instead, both he and Green suspect that Vornado is biding time until there is strong enough demand for new space in Boston for it to build and hit its original return targets. If the firm wanted to secure new financing for the project, it could probably find a willing foreign investor, Fasulo says.

After all, it’s a publicly traded REIT with an excellent development record and a high-profile site in a major U.S. city. It could also build a project that features primarily retail and rental apartments — the two sectors that have come back the strongest in Boston in recent months.

This year, the retail vacancy rate in Boston is expected to drop 40 basis points to 6.4 percent, according to Marcus & Millichap Real Estate Investment Services, an Encino, Calif.-based real estate firm. The vacancy rate for apartments across the Boston metro area will likely drop 90 basis points to 4.2 percent — lower than pre-recession levels.

The vacancy rate for office properties in Boston, however, will still average approximately 13.3 percent in 2011, Marcus & Millichap projects.

Vornado might need the profits from the condo and office components to make its numbers work. “Developers are in business to make money. It’s not particularly shocking that Vornado wants to get the best return it can on its investment,” says Green.

“I think it’s a great mixed-use site,” continues Green, “but it probably is not yet time to build on it. If I were a developer, would I start breaking ground right now? Probably not.”

Green also believes that it would be a mistake for Boston city officials to take the project back through eminent domain in order to redevelop it themselves. Cities have a history of spending too much money on construction compared with private developers, and they often get things wrong, he points out.

Vornado, on the other hand, has decades of development experience behind it, so it may make sense for the city to wait until it’s ready to start work on One Franklin Street once again.

“I think it has a great chance of getting built,” says Lapat. “It’s a phenomenal location and a neighborhood that has been going through a slow, but consistent, revitalization over the years. It would surprise me greatly if it doesn’t get built once the market corrects itself.”