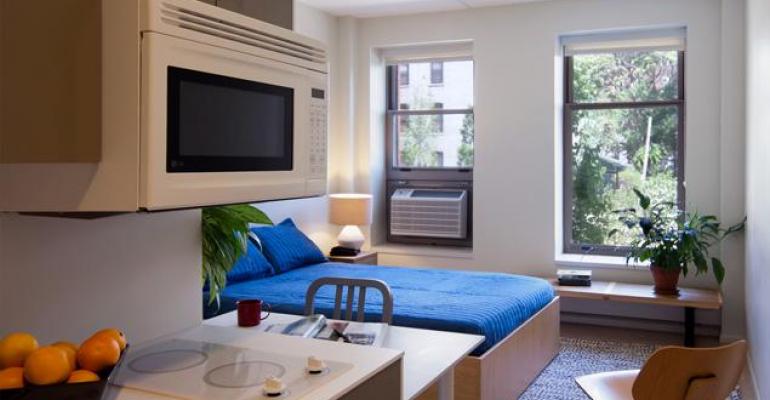 KeyBank is banking on affordable housing as a major future revenue driver. Last year, KeyBank’s community development lending and investment platform provided nearly $400 million in debt and equity financing to developments in underserved communities. In May, Robert Likes, a 13-year veteran with KeyBank Real Estate Capital and the former head of the company’s Northwest income property group, was appointed as national manager of KeyBank’s community development lending and investment (CDL) platform. His mission is to take the company’s CDL platform national. NREI spoke with Likes, who is based in Salt Lake City, Utah, about KeyBank’s strategic expansion plans. An edited version of that interview follows.

NREI: Let’s start with an overview of the affordable housing shortage. How severe is it?

Robert Likes: We have a shortage that’s really on a national basis from coast to coast, north to south and east to west. One might think that the coasts, where you have the most expensive housing markets, would have the greatest shortages, but it’s everywhere, and in cities where you may not even think there’s an affordable housing crisis, there is. And it continues to get worse because market-rate rents have been going up, especially since this last economic downturn in 2010—the rents have gotten quite steep quite aggressively in the past five years, but income has been staying flat during that time period. So the gap we previously had, which was very big, just keeps growing and getting exacerbated.

There are several affordable housing groups that lenders and investors support: moderate-income, low-income, very-low-income, and extremely-low-income. In the United States, we’re about 8.2 million units short in the extremely-low-income category. That would be for renters that are in the 30 percent of area median income (AMI) or below. You’ve got about 11.5 million renters competing for about 3.3 million units, so that’s a gap of about 8.2 million units—and that’s just for the extremely-low-income category. If you factor in the very-low to moderate-income categories, that gap widens even bigger. We’re short millions and millions of units and it continues to grow. What happens when you have not got enough supply is that people are forced to find alternative housing. A lot of times they end up going into a project where they’re using 50 percent or more of their income to pay for rent, and it doesn’t give them enough left over to pay for education, health care, transportation etc. So, just from an economic perspective, it’s very hard for that household to establish themselves and get ahead.

NREI: Which cities are most affected by the shortage?

Robert Likes: We’ve got a pretty big presence in New York State, where there are shortages, but in New York City alone, there was a project that came online in April and it had 55 affordable units and 88,000 people applied for it. That was 1,600 applicants for every single unit in just one building. Already this year in New York City, they’ve had 10 lotteries for 698 affordable units that have received 486,000 applicants. That’s 696 applicants per unit. New York City has a major issue, which has been pretty well publicized by the mayor who’s launched an initiative to create or preserve 200,000 units in 10 years. It’s important for the vibrancy and the economic vitality of cities to have all income classes live there and not be forced to go live in the far outstretches of the suburbs just because that’s where the affordable housing is.

NREI: You mentioned that some cities with housing shortages are surprising.

Robert Likes: Salt Lake City is a city where people wouldn’t think there’s a lack of affordable housing. But last January, the mayor there said they’re short 5,000 units just in the city alone, not even counting the greater metropolitan area. So the city has created a task force to figure out what to do about that. Likewise in Seattle, Denver and Portland, Ore.—it’s literally coast to coast what’s going on. Seattle has launched an initiative to create or preserve 20,000 affordable units over the next 10 years.

NREI: Are there any cities with innovative plans that are working well?

Robert Likes: I would say that we’re in the initial stages of solutions. With the housing crisis, the rents have gone up and the market rates have far outpaced incomes for the past couple of years, and it’s only within the last six months or so that some mayors have launched initiative task forces and committees, acknowledging that this problem is getting worse. One thing cities could do is continue to make use of the Low Income Housing Tax Credit (LIHTC) program, a federal program that has been around since 1986. But besides that, create real estate tax abatements for setting aside affordable units—that’s being implemented across the country. The tax abatements run with the land in agreement, so therefore it’s financeable. That’s a great way to help create additional affordable units and it’s outside the tax credit program. Then, besides any other grants or soft subordinate debt, offer tax breaks and offer low-interest rate loans and impact fee waivers for when they pull a permit or get their plans approved. We’ll see how this all plays out over time. One of the ones I’m seeing the most right now is real estate tax abatements in addition to the LIHTC program.

NREI: Any other innovative solutions?

Robert Likes: Cities could mandate affordable housing by zoning law changes. But it’s going to be up to each individual city to do that. They could say, “Okay, you want to build this project? Then it needs to have X number of units of affordable housing.” The problem with that is that it’s got to make economic sense to the developer to build. So there has to be some sort of incentive to make economic sense for the developer to pursue the project.

NREI: Have federal programs besides LIHTC leveraged much in private funding for public housing projects?

Robert Likes: Since it was launched in 1986, the LIHTC program has been the most successful program to create affordable housing. The problem is we need more programs. It’s just not enough, as the demand continues to outpace supply.

NREI: Why do you think federal policy is shifting from public housing to rental assistance?

Robert Likes: A lot of the original public housing stock is getting old. It requires subsidy from the government and the capital improvement needs continue to grow in these properties. So leveraging the private injection of capital and the resources from the private side can help bring in new, fresh equity to rehab older properties and bring them back up into a nice, vibrant housing stock. The LIHTC program is very important in the public housing space because it helps to preserve affordable housing so it doesn’t get taken out of our already short supply of affordable housing. That’s an issue as well: making sure we not only create new affordable housing but that we’re also preserving it. So going from public to bringing in private capital to preserve that affordable housing by using private capital to upgrade the projects is working extremely well.

Robert Likes: The way it works is that the federal government allocates tax credits every year to each state based on its population. In 2015 the amount for the allocation is $2.30 times the population. Then, for underpopulated states, there’s a minimum of $2.7 million. The federal government allocates the states, and the states turn around and allocate the tax credits to developers based essentially upon the need of the community and what the projects are. The projects that are located in the highest-need areas, that are the most innovative, that are going to be nice and reach the income of the very low income tenants etc.—those are going to be the ones that are generally going to be getting the awards from the state. And then when the developers get their allocation on an annual basis, they will turn around and sell their allocations to the private sector. That’s where KeyBank and other institutions come in—we’ll purchase that tax credit equity. And then what we get in return is a dollar per dollar reduction in our income tax liability.

NREI: Why is KeyBank starting to focus on affordable housing as a revenue growth driver?

Robert Likes: Our corporate national bank operates in all 50 states. We have real estate offices from coast to coast, including outside our 12-state retail footprint, so, for example, we have large offices in Atlanta, Dallas, Washington, D.C., etc., where we don’t have retail branches but we do operate our real estate lines of business.

And we’ve got very mature businesses in the REIT, income property and healthcare finance spaces and in the capital markets. All segments offer permanent debt placement, as well as full banking services. Our CDL group has been part of the real estate world, but has only been operating within our footprint, which is where we have physical bank branches. There are 12 states in which we have branches -- Maine, Vermont, New York, Ohio, Indiana, Michigan, Colorado, Utah, Idaho, Oregon, Washington and Alaska—so, historically, the CDL group has only been operating within those states. We are mission-based to provide vibrant, sustainable communities in the areas where we have branches, and, in return, we meet our Community Reinvestment Act (CRA) goals.

KeyBank has 26 years of outstanding CRA ratings for our programs—in fact, I believe we are the only financial institution among the 25 largest to have achieved eight consecutive outstanding CRA ratings. We’re very committed to CDL and affordable housing, and we have a long history and track record of success with that within our retail footprint states. However, all of our other lines of business within the real estate sector are national, and our affordable platforms are only in our retail footprint, so we’ve decided it’s a great opportunity to take our affordable housing platform national. We want to be able to tell our story for CRA on a national basis. We believe it’s great for KeyBank’s image, and we can grow our revenue this way.

NREI: So you’re counting on affordable housing doing well as a property type for a long time to come.

We also have the whole permanent loan platform as well to finance affordable housing on a permanent loan basis. So that’s a very compelling platform, combining balance sheet lending, equity, and all the permanent loan products to be able to call on owners and developers of affordable housing on a national basis. From a growth perspective, we think that this property type is going to be one of the major property types over the next many years due to the fact that it’s low risk and there’s an extreme shortage of supply.