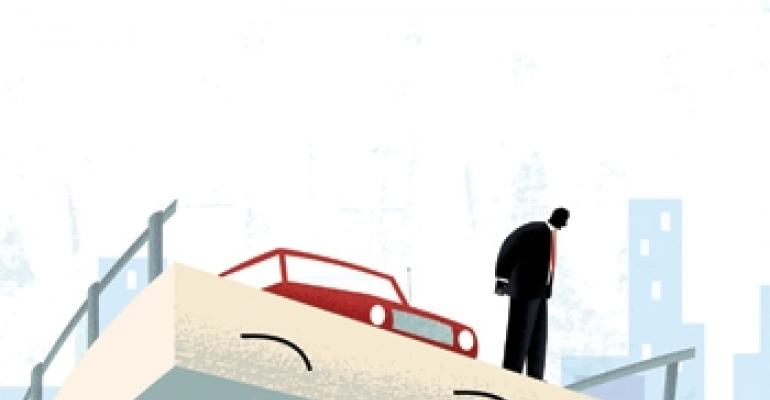 A lot of attention has been paid to Standard & Poor’s historic decision to downgrade the United States’ credit rating on Friday and the potential implications of the move. But the ratings change was just the latest in a series of troubling economic signs, which are increasingly threatening to derail the commercial real estate industry’s nascent recovery.

In the wake of the downgrade, announced Friday after markets closed, the S&P 500 contracted 6.7 percent on Monday—the twelfth-biggest one-day percentage decline for the index since 1950. It was the second harrowing day in less than a week as the S&P 500 also fell 4.8 percent last Thursday. It was even worse for REITs, with the SNL US REIT Equity Index, for example, falling 9.0 percent.

But S&P’s downgrade was just the latest piece of bad economic news. On July 29, the U.S. Department of Commerce Bureau of Economic Analysis estimatedthat U.S. real gross domestic product rose at a weak annualized rate of 1.3 percent in the second quarter. Further, it revised real GDP in the first quarter to an annualized rate of 0.4 percent and made other revisions to older data showing a deeper recession and weaker recovery to date.

In addition, recent indicators on manufacturing, consumer spending have also come in weak. And the jobs market remains in a parlous state. While the Bureau of Labor Statistics did report that the unemployment rate fell to 9.1 percent and that the economy added 117,000 jobs in July, that number is just barely ahead the roughly 90,000 jobs a month the economy needs to keep pace with population trends. Moreover, peak-to-trough, the economy shed 8.75 million jobs between January 2008 and January 2010 and only 1.94 million jobs have been added back since then.

All of this is providing headwinds to a commercial real estate recovery that began to take shape in 2010 and in the first six months of 2011.

“I definitely think the momentum is at risk,” says Kim Diamond, senior managing director with New York City-based Kroll Bond Ratings. “There is a tremendous amount of uncertainty and I think everyone is holding tight.”

In addition, perhaps the most troubling aspect of Standard & Poor’s ratings decision was that it was not based on an assessment of the government’s ability to service its debt, but was a reaction to the political climate that has emerged in Washington that came to a head in the recent debt ceiling negotiations. The rating agency argued that the episode has raised questions about whether Congress will be able to come up with an adequate plan for reducing the nation’s deficit.

Some have questioned whether that, in itself, is grounds for a ratings downgrade. Indeed, the two other major rating agencies—Fitch and Moody’s—maintained their credit ratings on the United States while sharing similar concerns about the political landscape.

But there is little dispute that uncertainty—stemming from both Washington and from the broader economy—is affecting corporations and consumers. And this is where the peril lies for commercial real estate. Corporations that opt to sit on cash rather than investor or to hire and consumers that opt to save rather than spend will slow demand within the commercial real estate sector.

“It’s basically a wait-and-see approach right now,” says Merrie Frankel, vice president-senior credit officer with Moody’s Investors Service in New York. “Things were at a point where it was starting to get a little better—if erratic. … But the market goes down 1,000 points and you feel different. And when you see what’s happening in London and the volatility in Europe, it really gives you pause.”

“I am not worried about any particular item, but everything is starting to add up,” adds Dan Fasulo, managing director with Real Capital Analytics.

The wave of uncertainty is hitting after a long stretch of recovery for the commercial real estate sector.

New York City-based real estate research firm Real Capital Analytics, for example, is maintaining its projection that the industry will see about $200 billion in transactions—the most since the downturn began. It would put the industry on par with 2008. The volume for the first half of the year was $77.8 billion—a 124 percent increase from the first half of 2010. Cap rates for all property sectors also have stabilized and are below peaks reached in 2009.

Meanwhile, Moody’s Investors Service issued an outlook last Thursday maintaining a stable ratings outlook on the REIT sectors it monitors. “Operating fundamentals for all the major property sectors are either improving or showing signs of stabilizing,” the agency wrote in its report. The firm did not expect a “robust recovery” to occur, but found that “REITs managed to keep their portfolios well occupied and, for the most part, they continue to outperform in most of the markets in which they operate.”

Within the retail sector, for example, Frankel says that retailers have had a better handle on distribution and merchandising strategies in the past 12 months and have, for the most part, posted healthy earnings figures. In turn, retail REITs have reported healthy leasing spreads and improved occupancies in recent quarters. That led Moody’s to have a stable outlook for most of the retail REITs the firm covers.

The reemergence of the CMBS sector played a big part in the numbers. Overall, loans for conduits for CMBS saw an increase of 638 percent compared to last year's second quarter, according to MBA.

But red flags have now emerged in the CMBS space with, ironically, Standard & Poor’s at the center of another controversy. In late July, Standard & Poor’s pulled its preliminary ratings on two transactions worth a collective $2.7 billion after it had found “potentially conflicting methods” in how it was rating securitizations. As a result, Citigroup and Goldman Sachs had to cancel the sale of a $1.5 billion securitization.

“That took a tenuous market and threw cold water on it,” Diamond says. “Transactions that are not plain vanilla—things that don’t fall into the conduit/fusion category, but rather are more complex or more off the run—that’s the kind of trade that’s not easy to get done right now at all. What remains more questionable is whether people can execute even vanilla conduit/fusion deals.”

Standard & Poor’s resumed rating CMBS offerings on Friday—the same day it downgraded the U.S. credit rating. But the ratings snafu sent a shock to the CMBS market and may slow its reemergence. Earlier in the year observers projected that origination volume might hit $50 billion or more this year. Underwriters have sold about $21 billion in CMBS this year and were on pace to almost triple last year's total. Now, expectations have been tempered. (Diamond, for her part, thinks volume will reach between $35 billion and $40 billion.)

But that won’t be enough to fill the funding requirements of the sector, especially as loans mature.

“We’re getting close to the point where the market cannot continue to see tremendous growth without CMBS as a source of liquidity,” Fasulo says. “There are a lot of deals where borrowers can engage balance-sheet lenders directly. But that can’t go on forever.”

Fasulo adds that the hiccup in the CMBS market along with the broader economic challenges do seem to have begun to affect investment sales transactions. “Anecdotally, I’ve heard that some re-pricing is going on behind the scenes, causing some deals to fall apart and others to be delayed.” It’s also affecting portfolio deals—where CMBS was expected to be an important funding source. Fasulo adds that this may have even been a factor in General Growth’s decision to put a portfolio of malls into a spinoff, rather than go ahead with a disposition.

In addition, the likely fallout of the broader economic uncertainty is that corporations and consumers become more conservative with their spending, which would curtail demand for vacant commercial real estate space, according to Chris Macke, senior real estate strategist with the CoStar Group, a Washington, D.C.-based research firm.

“Manufacturing, the service sector and unemployment are all trending in the wrong direction and then you add on top of that corporations and consumers holding back and the S&P downgrade and it just creates a lot of uncertainty,” Macke says. “The key debated question on the demand side now has become whether this is transitory, or whether it’s the beginning of a double-dip.”

Those saying that the dip will be short-lived tend to point to oil prices, which have begun to fall, and Japan, where spending is ramping up again after falling off precipitously following the tsunami, according to Macke. More pessimistic observers believes that the clouds gathering are the sign that a second dip to the recession is beginning or has already begun, he adds.

Unfortunately, some observers don’t anticipate much clarity emerging—especially from Washington.

“What we’re dealing with is pre-election gridlock,” said Kroll Bond Ratings President Jim Nadler. “I think what we’re going to see for the next year is people staking out positions. I don’t think we’ll see meaningful leadership until after the 2012 elections.”