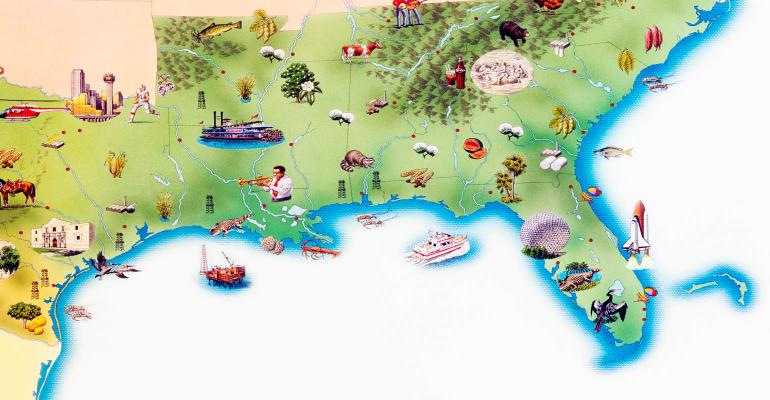 The South could become home to some of the nation’s largest cities. Many businesses will flee high-tax states in favor of low-tax states.

(Bloomberg View)—It's hard to find controlled experiments in finance. But they exist. East and West Germany, North and South Korea, Chile and Venezuela. In crossing a border, you can immediately see the difference in economic output and financial well-being from one country to the next, based on variations in tax and regulatory policy. The same goes for within the U.S. Tax policy drives economic behavior in this country, because people respond to incentives. As taxes in high-tax states have gone higher, there's been a migration out of states like New York, New Jersey, and California, and into places like Texas and Florida. Consider York, Pennsylvania, home of a great deal of agriculture, some manufacturing, and the 1990s rock band Live. It’s on Pennsylvania’s southern border with Maryland. As taxes went up in Maryland in the late 2000s, including the addition of a “millionaires’ tax” of 6.25 percent, people discovered that you could live right across the border in Pennsylvania (where the state income tax rate is 3.07 percent) and enjoy a short 45-minute commute to Baltimore. York, which used to be a fairly awful place, economically speaking, has enjoyed an economic renaissance, seeing an increase of about $784 million in annual adjusted gross income over a period of 24 years, according to howmoneywalks.com. With the proposed Republican tax reform bill comes a $10,000 limit on state and local tax deductions for individuals. Some of the impact has been offset by lower marginal tax rates, but the net effect makes low-tax states more attractive on a relative basis, which is a bit of an understatement: the difference between living in New Jersey and living in Florida could amount to tens of thousands of dollars for high income households. Many analysts say the U.S. is a low-tax country, mostly on the idea that taxes paid as a percentage of gross domestic product are lower than most other developed economies. But whether the U.S. is a low- or high-tax country is a matter of perspective, and depends a lot on your income, as the tax code is steeply progressive. With a top federal rate of 39.6 percent, plus a state income tax of 9 percent to 13 percent, plus property taxes -- which are no longer fully deductible -- the tax burden for high earners approaches Scandinavia, where tax rates are in the high 50 percent range. People used to complain about high taxes before, but for the most part, they tolerated them. I suspect that now they are going to do something about it because capping the deductibility of state and local taxes (SALT, as it is known) has the potential to result in a population migration so large that it would result in profound economic and social changes. For starters, the South could become home to some of the nation’s largest cities. Many businesses will flee high-tax states in favor of low-tax states. This has been happening for years, but SALT will accelerate the trend. Of bigger concern is how the leadership of high-tax states will respond. If individuals and businesses leave, eroding the tax base, states will face a choice between cutting spending or raising taxes. Less spending is hard with existing pension obligations, so there’s a strong possibility that a state like New York or Connecticut could enter a “death spiral” where residents leave, the state raises taxes, more leave, and so on. Since the governments of the high-tax states are nearly all Democratic, I doubt many have the desire to cut services when faced with net migration out of the state. It goes further. People are starting to figure out that an inability to fully deduct property taxes results in lower real estate valuations. If there is more tax on your house, your house is worth less. This is just math. I suspect the market is rather efficient and real estate values will drop in high-tax jurisdictions, and the drop will accelerate as people leave and bids evaporate. My prediction: Over time, New York City will lose its status as the intellectual and cultural capital of America. The real estate market in California, at stretched valuations, will suffer. Minnesota, Oregon, Iowa, Maine and others will also feel the pain. Florida and Texas will become the new centers of finance and innovation, with real estate values in Austin and Miami -- and even Nashville -- reaching valuations once reserved for California and New York over the course of a few decades. There's a saying on Wall Street that capital flows to where it is treated best. Certain states have been getting away with high taxes because there are frictional costs associated with moving. It is a simple calculation: if the benefit from moving exceeds the costs, both financial and emotional, people will do it. Many New Yorkers will be shocked when they go to Zillow and see what they can get for their money elsewhere.

Jared Dillian is the editor and publisher of The Daily Dirtnap, investment strategist at Mauldin Economics, and the author of "Street Freak" and "All the Evil of This World." To contact the author of this story: Jared Dillian at [email protected] To contact the editor responsible for this story: Robert Burgess at [email protected]